At the beginning of May, just a few days after the N.F.L. draft, the N.F.L. Players Association hosted a conference call for hundreds of rookies and their agents. The call was ostensibly to welcome the players to the league and explain their benefits as union members. But during the discussion, J.C. Tretter, the union’s president, also repeated a pitch that he has made to veterans for months: Most off-season workouts are voluntary, and no player should feel obliged to attend them.

Harold Lewis, one of the agents on the call, pushed back. Telling rookies to avoid off-season workouts was “complete insanity,” he said in a phone interview, because they are critical opportunities to impress coaches. Veterans with guaranteed contracts may feel secure enough in their jobs to skip a week or two of workouts, but players who still must earn a roster spot may not.

“When you’re talking about rookies, whether it’s first pick or Mr. Irrelevant, to tell them not to show up, I don’t understand it,” Lewis said, recounting his dispute with union leadership on the call. “And for an undrafted player, it’s suicidal.”

The rookies were just the latest group that the players’ union has pushed to avoid off-season workouts. At the N.F.L.P.A.’s urging, veterans from half the N.F.L.’s teams pledged not to attend voluntary camps, with Tampa Bay quarterback Tom Brady out in front on the issue. Tretter, an offensive lineman for Cleveland, claimed that less than half of all players showed up for the first workouts in late April.

The union’s campaign to dilute off-season workouts hit an unexpected and unfortunate speed bump on May 4, a day after the pitch to rookies. Ja’Wuan James, an offensive lineman for the Denver Broncos with seven years’ experience, tore an Achilles’ tendon while working out on his own, instead of at the team’s facility. The Broncos put him on the non-football injury list, which is normally for players who get hurt doing activities other than training for football.

Seeming to back the Broncos’ decision, the N.F.L. sent teams a memo on May 5 with the reminder that they are under no obligation to pay players injured away from team facilities. A week later, the Broncos then released James, with the option to void the $10 million salary he would have been paid this season.

DeMaurice Smith, the executive director of the players’ union, said this week that James could reach a settlement with Denver, or the union may file a grievance on his behalf. James’s agent did not return a request for comment.

Still, James said on social media that he felt snookered. His salary would not have been at risk if he was injured during a voluntary workout at the team’s facility, a fine point detailed in the league’s labor agreement that applies to all players.

But James followed the union’s advice and now he is suffering the unintended consequences. He added his voice to calls for the players’ union to indemnify players who were injured working out on their own. “@NFLPA if your gonna advise all of us we need you to have our backs on the other end of this,” he wrote on Twitter.

After James called on the N.F.L.P.A. for support, Tretter did not say what help it would provide, only that there was no way to fully protect players. “As players competing at the sport’s highest level, the reality is that we must train year-round, meaning we assume an inherent level of risk during the majority of the off-season while preparing on our own away from the facility,” he wrote in his newsletter on Monday.

James’s injury ignited an already simmering debate about off-season workouts, and the union’s one-size-fits-all advice to members who have very different priorities.

At issue are “voluntary” workouts that coaches have made all but mandatory in recent years, according to the union. Tretter pointed to 2020, when all off-season workouts were scrapped because of the coronavirus pandemic and players made it through training camp and the season no worse for the wear. He also claimed that there were an inordinate number of injuries during these off-season workouts that could have been avoided if coaches didn’t push players so hard.

In a league as cutthroat as the N.F.L., players without assured roster spots or roles — and there are hundreds of them — have no choice but to show up to the minicamps in April, May and June if they hope to win one. Even though James had a long-term contract, he too had something to prove: He opted not to play last year during the pandemic, and a knee injury limited him to just three games in 2019, his first season in Denver after five with Miami.

These competing priorities are another reminder of the vast gap between the top tier of players, including Brady, who has backed the union’s push, and the far less wealthy players who fill most roster spots and are typically out of the league after just a few years. The union’s campaign to reduce injuries during the off-season is admirable, but telling players to stay home raises questions about whose bidding the N.F.L.P.A. is doing. 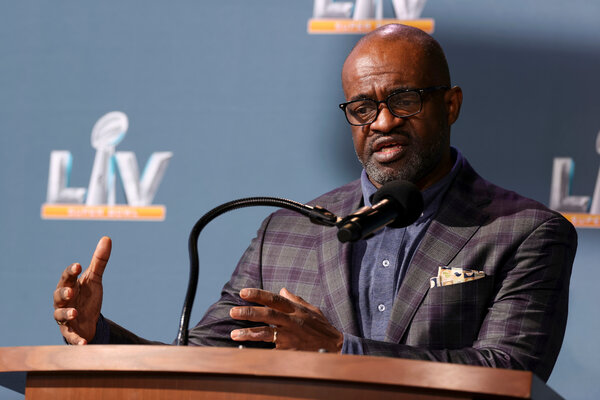 “It might be fine for Tom Brady to avoid minicamp, but he isn’t a representative example of a football player,” said Brad Sohn, a lawyer who has represented numerous injured players. “This speaks to who the union is trying to represent, its loudest and most influential constituents or all of its members.”

News reports suggest the percentage of players at the second set of workouts that began this week is higher, a sign that rank-and-file players are having second thoughts.

Lewis said one of his clients, Keanu Neal, has gone to Cowboys’ minicamp this spring because he wanted to impress his new bosses (he spent his first five years with the Falcons) and start learning his new position, linebacker. “Of course he’d like to be back home in Florida with his wife and newborn baby, but he is trying to build a future for them and the sacrifice of just a few weeks is worth it,” Lewis said.

Ross Tucker, a former offensive lineman, said he battled for roster spots throughout his seven-year career and always attended off-season workouts because he never wanted to give a coach a reason to cut him. “There’s no way I would have hurt my career because of a new N.F.L.P.A. initiative,” said Tucker, who has his own football podcast.

But there are only nine weeks of off-season workouts, so players are left alone for 20 weeks. Tucker said that he knew that his salary was at risk if he was injured away from the facility, so he stopped playing basketball and skiing while he was in the league.

Most players, though, don’t listen to the warnings, which is a problem when the union tells its members to consider skipping minicamps, he said.

“You’re talking with guys in their 20s and a lot of them feel invincible and they’re not reading up on what the rules are,” he said. “It’s hard to help guys who don’t want to be helped.”