One of the signature moments of the Evian Championship’s trophy ceremony comes when a parachutist descends onto Evian Resort Golf Club’s 18th green to drape the flag of the winner’s home country around her shoulders.

On a few recent occasions, no one would have blamed the new champion for pulling the flag a little tighter around her — for warmth.

Though the tournament’s September date had given it the distinction of being the year’s final major championship on any tour, it came with the risk of getting hit by capricious weather as seasons changed in Évian-les-Bains in the French Alps, where the tournament is held — and not enough daylight to weather a storm delay to complete play.

In two of six Septembers, heavy rain prompted L.P.G.A. officials to shorten their newest major to 54 holes. A 2017 playoff between Anna Nordqvist and Brittany Altomare was contested amid freezing rain and hail.

Mike Whan, the L.P.G.A. commissioner, closed that chapter with an apology in 2018 for moving the tournament from July. The Evian Championship tees off Thursday, returning to a summer slot and rejoining a crowded golf calendar, but with greater peace of mind about finishing on time. 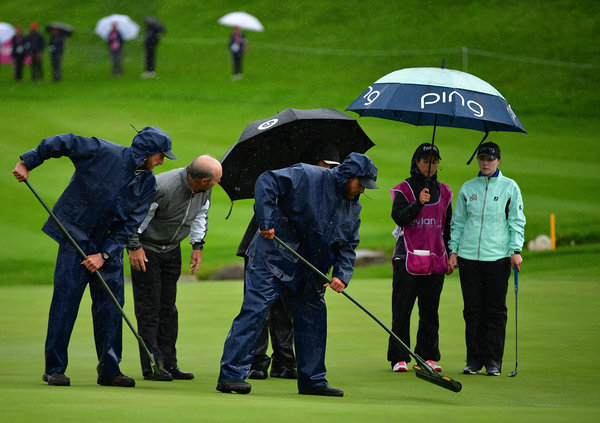 “Once I knew I’d made a mistake — and I had — I wanted to correct it,” Whan said this month. Even with the chance of summer storms, he noted, the tournament now has two more hours of daylight each day to get back on schedule.

Though it will take two years to work out the scheduling kinks — this week’s Evian is the first of back-to-back majors with the Women’s British Open — the move draws high marks from players.

“I think everyone who has grown up in Europe knows that September can be a little sketchy,” said Nordqvist, of Sweden, who won the 2017 playoff. “We can be lucky, and we can be unlucky. I feel this tournament has really been hit hard with some unpredictable weather over the years.”

The tournament started as the Evian Masters in 1994 and was played in late June or early July.

Whan elevated it to major status in 2013. The field also grew from an 80-player invitational to 120 entrants, and he pushed the idea of the September date.

What the association did not factor in was that the increased field would add two more hours of play each day, while lopping off two hours of daylight.

That realization hit home in the Evian’s first year as a major, when heavy rains prompted officials to scrub the partial scores of the opening round and start fresh the next morning.

“My rules officials were saying if this [rain] goes longer than 45 minutes, we’re not going to finish today,” the commissioner recalled. “As soon as a person on my staff said that, I was saying, ‘You idiot,’ meaning me.

“No matter what tournament we’re talking about,” Whan said, “if you only have 45 minutes of extra daylight and you get a delay of three hours, you can’t catch up on Thursday, Friday or Saturday.”

Then bad weather, with high winds, hit again four years later, and several players were frustrated that they were sent out even for a few holes.

Now they are. Whan said the Evian will stay put in July even in 2020, when the Summer Olympics will force an alteration of the schedule pushing the Ladies Scottish Open and the Women’s British Open later into August.

Whan said he was not overly chagrined by the September stumble, calling it part of his promise to bring “new and big ideas” to the job. “I’d be more embarrassed by an unwillingness to change,” he said.

The commissioner compared it to a player who works on a swing change in the winter, seeking to become even a couple of shots better over the course of a round. Often, the game takes a step back before it gets better.

“I remember thinking I’d better be as bold as she is,” Whan said. “We’ve got to be willing to take some chances and maybe hit a few shanks.”