Adelaide United substitute George Blackwood has scored a last-gasp winner in a 2-1 triumph over Central Coast in Sunday's A-League match. 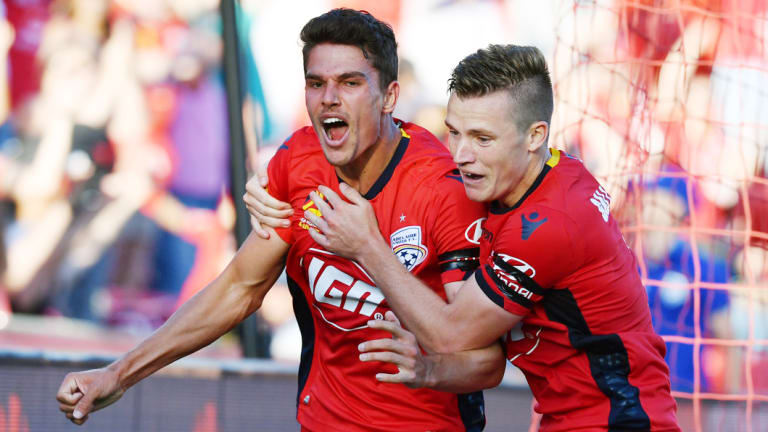 Mariner Andrew Hoole's classy first-half strike gave the visitors the lead only for Reds captain Isaias to equalise in the 62nd minute.

Blackwood then nodded in the late winner as Adelaide banked a seventh victory of the season.

The result was a bitter end for Central Coast, who made the early running when Hoole curled in a long-range stunner in the 37th minute.

The midfielder took possession 21 metres out and was effectively dared to shoot by Adelaide's Nathan Konstandopoulos.

Hoole launched a perfectly timed right footer which curled into the net to beat a despairing dive from Reds goalkeeper Paul Izzo.

Adelaide was denied a chance to equalise by a VAR ruling in the 47th minute.

United's Ryan Strain tore along the right flank, then angled his run into the box and blasted a cross into the danger zone with the ball striking the right arm of Mariners defender Aiden O'Neill.

Adelaide's pleas for hand-ball were refused by referee Jarred Gillet and VAR upheld the contentious call.

The Reds blew a succession of chances before Isaias' equaliser.

The Adelaide captain pounced after a corner cleared a defensive pack and fell near him – the Spaniard instinctively poked into the net from three metres.

Both sides had late half-chances before Adelaide's Scott Galloway, in added time, tore forward and crossed into the box to find a charging Blackwood, who scored from close-range.