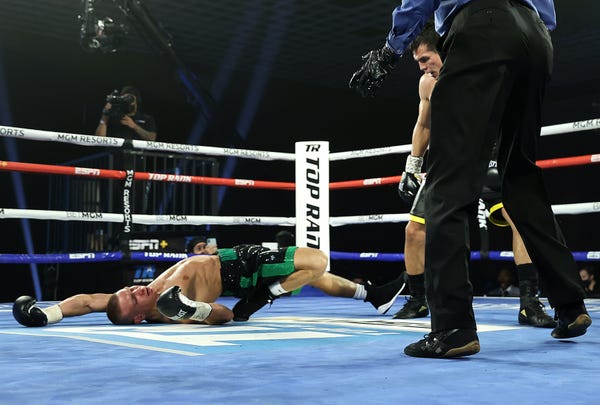 Whoever said the sport of boxing would suffer without a live gate perhaps did not anticipate the chaotic violence which Jose Zepeda and Ivan Baranchyk could bring to a behind-closed-doors ring on a Saturday night in Las Vegas.

When the opening bell chimed on the ESPN broadcast, just before the cameras zoomed into the impending action, a sign could be seen in the background which said "This is boxing" in a font often associated with Sin City's neon.

You see, this was not boxing in the purest of senses, as this was for those who like seeing fighters throw away the textbooks by abandoning the jab in favor of brain-rattling right hooks.

This was for those who like seeing knockdowns tallied like a high-scoring soccer game, when offenses thrive, defenses go walkabout, and somebody gets sent off for losing their cool.

This, my friends, was a fight designed with you and I in mind — the unapologetic savages out there who consider mindless professional face-punching fun.

Zepeda had to climb off the canvas twice in the first round and exchanged a knockdown with Baranchyk in the second, meaning there had been four knockdowns in six minutes alone.

According to Compubox data sent to Insider, Baranchyk only landed five jabs by the end of the third — two more than Zepeda.

This was all about the power punches, with Zepeda beginning to get the better of exchanges by scoring a knockdown in the third, the fourth, and then getting up from the floor again to finish the fight for good in the fifth.

The final sequence, a two punch combination which included a right hand over the top and a left hand rammed into the mouth, buckled Baranchyk's legs and he fell awkwardly to the floor. Shortly after, he was taken to hospital in an ambulance.

It was all over.

The ping pong pugilism won plaudits from many pundits including the prominent boxing reporter Kevin Iole who said on Twitter that it was "one of the best all-time fights in boxing in Las Vegas."

Zepeda had survived four knockdowns to score the greatest win of his career, advancing his record to 33 wins (26 knockouts) against two losses.

"I feel great because I won the fight," Zepeda said after the win. "It was a hard fight, and I'm thinking, 'Man, boxing is hard. It's no easy game.'

"I know I'm tough. I didn't know how tough I was. Tonight, I showed myself, too. I've never been in a fight like this. It was a great learning experience."

With hindsight, that neon-style sign behind the Top Rank ring should have said "This is fighting," because it will likely never get as brilliantly feral as that.