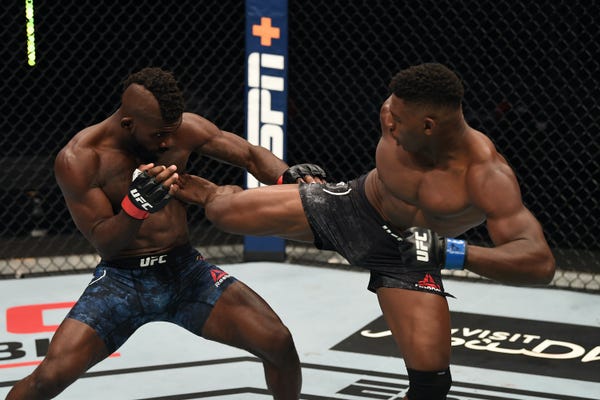 The fight-ending sequence began when Kasanganay caught one of Buckley's kicks in the palm of his hand but, rather than panic, Buckley pivoted into an inventive jump spinning back kick which knocked his opponent out cold.

The combination of the ultra-rare maneuver — it is just the fourth finish of its kind in UFC history — and the effect it instantly had on Kasanganay made for an immortal moment.

The UFC's own social media channel even called it the "most unbelievable" stoppage in its history.

But the prominent ESPN personality Scott van Pelt, known for his work within golf and football, said he did not love what he saw.

"I get that people love it … I don't," he said on SportsCenter. "I don't love that. The guy is out! Mashes his head on the ground! Yay!"

Van Pelt's comments became the talk of fight fans on social media, and of those who work inside the industry.

The popular combat sports journalist and presenter Brian Campbell said on his Morning Kombat show on YouTube that he respects van Pelt for airing his opinion, adding it is a reflection of what the mainstream media thinks of mixed martial arts.

"So many hardcore boxing fans who love boxing will never be okay with one guy going full mount on somebody else, sitting on his chest, and parading down strikes as blood and guts jump out. I get it. It's not for everyone.

"This is a niche sport," Campbell said. "A niche sport that got really damn far because of Dana [White, the UFC president] and [former owners] the Fertittas.

"It's still a fricking niche sport for a reason. That's fine, SVP. But … celebrating the violence of it? It's part of what gets us here. Part of the admission. That's what we're after.

"Like home runs, touchdowns, or slam dunks, [the knockout] is the exclamation point of the sport.

"These guys sign up for it. They know what they're in for. There's not only the threat of violence but embarrassment. Thank you to these guys for being willing warriors, but I'm not going to apologize for the sport.

"I respect Scott van Pelt's opinion but it's not mine," he finished.

"The UFC is airing on ESPN, Bellator is on CBS Sports. There's never been a better time to be the sport's fan. You can get DAZN and Fight Pass. This is the golden age of being a fight fan.

"There's fights every weekend all over the globe and, if you want to, you could watch every single one.

"The argument of whether fight sports should continue and should be a thing in society is over, and fight fans won it."

Thomas added more on Twitter, saying: "Lots of folks in MMA bitter at [van Pelt] about his views on MMA without realizing at most media companies, this view is the norm.

"Media companies got into MMA because they wanted web traffic or to keep up with competitors. They don't 'believe' in MMA. It's all transactional."

Van Pelt replied: "Luke, the sport has grown on me and the people in the sport are compelling as hell.

"I was talking only about the sight of a man out on his feet falling and hitting his head.

"Being called a b—- all morning is par for the course. It's a passionate fan base."