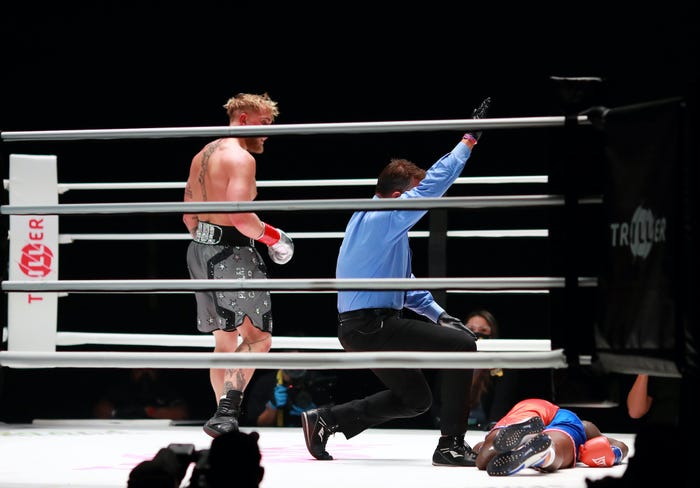 Robinson and Paul fought a pro cruiserweight match which served as a co-main event for the highly-anticipated exhibition between two former heavyweight champions Mike Tyson and Roy Jones Jr.

While Tyson and Jones boxed to an eight-round draw, it was Paul who provided the highlight-reel moment of the night as a two-punch sequence left Robinson face-down on the canvas. He lay motionless for an uncomfortable amount of time, raising questions about the matchmaking on show in the bout.

It was Robinson's first fight and a devastating defeat.

CamSoda and Fight Circus want him to headline their third-ever event, and say they'll pay him $200,000 for every person he fights that night.

In a letter, sent just to Robinson and Insider, CamSoda laid out the fundamentals of the offer.

Here's the letter in full:

This is not the first bizarre offer CamSoda has made.

It was also behind the mega-money bid to bring Mike Tyson to Thailand on the pretense of making sure no competitor was wearing a fake penis.

Tyson has previously said he once used a whizzanator, a synthetic penis filled with clean urine. The former heavyweight champion was concerned he could fail a drug test as he had been taking cocaine.

To ensure its shows were above board, CamSoda wanted Tyson to be its Drug Test Coordinator and make sure there were no whizzanators at Fight Circus Vol. 2 — Circus Harder.

The company said while it approved of medicinal drug usage: "We cannot stand for PEDs and fake Johnson's in our Circus!"

Fight Circus began in August this year and featured inter-gender grappling and a 2 vs. 1 brawl.

Fight Circus awarded winners samurai swords and losers pink bongs. Golden axes were also given out at some point, too.

Vol.2 in November was just as bizarre, featuring a 3 vs. 1 brawl, a spinning attacks only fight, and world championship leg wrestling (like arm wrestling but you lie flat on your back and use your leg).

It is unclear when Vol.3 will be but, CamSoda is already planning its card.