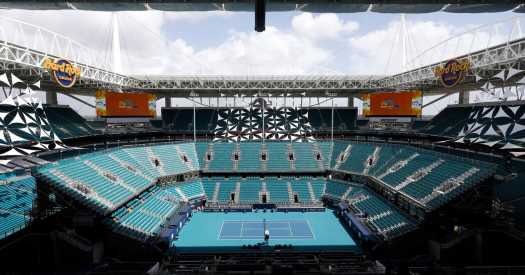 There is a significant tennis tournament beginning its main draw in Miami this week. It is one of the most important annual events in the sport, attracting hundreds of players from all over the world, including multiple Grand Slam winners, competing for one of the largest prize purses of the year.

So why doesn’t it feel that way?

Maybe it’s because several of the biggest names in the sport — including the grand troika of Novak Djokovic, Rafael Nadal and Roger Federer in the men’s game, plus Serena Williams — are skipping the event. Or because attendance will be limited to a maximum of 1,000 spectators a day, compared with nearly 400,000 over two weeks in 2019, despite state rules in Florida that would allow far more.

Maybe it’s because the Miami Open is taking place without the opening act of the March winter hard court swing, the BNP Paribas Open in Indian Wells, Calif., which officials in the state wanted no part of in the winter when infection rates were surging in Southern California.

Or maybe it’s because the Miami Open is a microcosm of tennis in 2021 — an unpredictable puzzle of player scheduling, travel advisories and health precautions in a season that has forced players to set priorities in a way they never have before. Many, especially the biggest stars, now view tournaments not simply as a means to compete or a chance for a paycheck but for whether an event fits into their broader life.

“It’s so many different reasons,” James Blake, the former player who is the tournament director in Miami, said when asked what has influenced players’ decisions to play or skip the event. “As a former tour player, I can tell you are programmed to want to compete against the best players in the world. That is always your main motivation.”

Except when it isn’t. Williams withdrew Sunday, announcing she had not fully recovered from recent oral surgery. Djokovic, who is the top-ranked men’s player and recovering from a torn abdominal muscle, pulled out Friday afternoon. Djokovic’s management agency, the sports and entertainment conglomerate, W.M.E.-I.M.G., owns the Miami Open, but that was not enough for him to make the trip. He announced on Twitter that he had “decided to use this precious time at home to stay with my family. With all restrictions, I need to find balance in my time on tour and at home.”

Daniil Medvedev, the world No. 2 and a 2021 Australian Open finalist, is playing, as are the rising stars Stefanos Tsitsipas and Alexander Zverev. But the women’s draw, which includes Naomi Osaka, Ashleigh Barty and Simona Halep, may provide much of the heat.

Nadal announced earlier this month that he was skipping Miami to continue healing his sore back and to prepare for the spring clay-court season, during which he usually excels.

Roger Federer, the defending champion in Miami who returned to professional tennis earlier this month after two knee surgeries and a 14-month hiatus, said his goal is to be 100 percent healthy for Wimbledon in late June. A two-week jaunt to the United States for a single hard court event didn’t make sense. He also has not committed to playing much on clay this season. 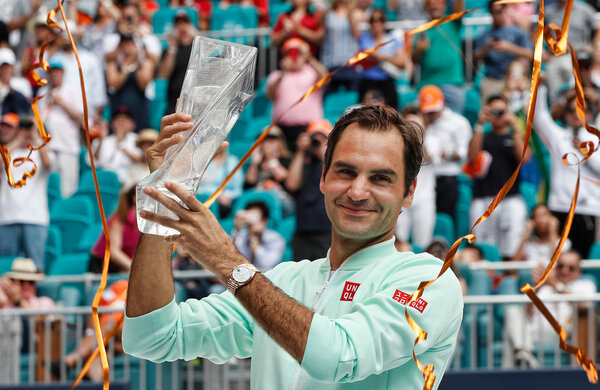 Austria’s Dominic Thiem, the 2020 United States Open champion, is slumping and taking a pass. Stan Wawrinka of Switzerland, a three-time Grand Slam winner, said he was too tired. Nick Kyrgios lives in Australia, which has strict quarantine rules for travelers, and has yet to figure out how much tennis he wants to play this year.

It is the new normal of tennis. To play or not to play is a complicated question, and an unexpected result of that is Miami foreshadows what tennis will look like eventually. No Big Three. No Serena Williams.

“It’s always nice to have two of the biggest names in sports on your air, but there is so much talent out there and that gives the chance for different stories to be told,” said Ken Solomon, chief executive of The Tennis Channel, which will air 125 hours of live coverage of the event in the United States. “We get 128 phenomenal athletes competing in this thing, you don’t start thinking about who is not there.”

For months in the United States, many sports have more or less proceeded, even as most people faced significant limitations on travel and contact with those outside their households. The N.F.L. held a Super Bowl with 22,000 fans, the N.C.A.A. started two Division I basketball tournaments with 132 teams from across the country descending on the Indianapolis and San Antonio regions, and hockey players scrap cheek-to-jowl on the ice every night.

However, with Florida essentially ridding itself of most pandemic-related restrictions, the roles of have flipped. Players arrived in Florida during the past few days along with spring break revelers who are filling Florida’s beaches, bars and nightclubs. The players, who are used to indulging in Miami’s culture, restaurants and nightlife when they are not playing tennis, are living under strict guidelines that the men’s and women’s tennis tours created to keep them as safe as possible.

During the tournament, they must live in one of two hotels for players and officials. Had she played, Williams could not have commuted from her home, roughly 75 minutes away. The players’ movement is limited to the tournament and the hotel. No ventures to Joe’s Stone Crab, South Beach or Coconut Grove until they’ve lost.

“It does make it harder when you are part of the bubble,” Lauren Davis, the veteran U.S. player, said. “The experience is more draining. There is no outlet for the stress.”

Miami Open organizers did not construct the temporary 14,000-seat court inside the Miami Dolphins’ stadium this year. The most important matches will take place on three smaller courts.

Prize money has been slashed to $6.7 million from $16.7 million in 2019, though it is among the largest prize purses outside of the Grand Slams and the tour finals. Nearly everyone at the tournament site will have to wear a mask at all times, except for players while they are on the court.

Tennis will likely look this way for some time. The All England Club, the host of Wimbledon, announced last week that players will have to stay in specified hotels for the tournament, set to begin in late June, despite Britain’s success with its vaccine program. Crowd sizes will be reduced and spectators will not be able to line up during the day to search for a ticket.

Stefanos Tsitsipas of Greece, ranked No. 5 on the men’s tour, said during last week’s tournament in Acapulco, Mexico, that the tour sorely missed Indian Wells this year because it gathers so many top players in front of rabid and casual tennis fans in the United States during the first half of the year. The opportunity to play in front of a crowd of any size — Acapulco allowed roughly 3,000 spectators for each session — had vastly enhanced the experience.

“I feel really connected,” he said of the experience of playing in front of fans. “I feel like I can enjoy the game.”

But the challenges of the pandemic have forced Tsitsipas and other players to focus almost entirely on larger tournaments for the time being, and the biggest stars to focus almost exclusively on the Grand Slams. Events like Miami may offer plenty of money and rankings points, but everything is just a little different this year.