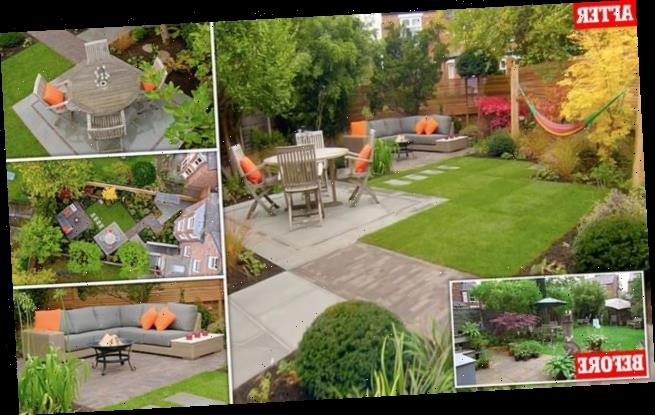 Your Garden Made Perfect viewers praised a £23,000 makeover on last night’s episode, declaring it ‘the best’ of the series.

Mandy and Chris had lived in their stunning Manchester home for eight years but never used their north facing back garden because it was dark, ill-designed and lacked a sense of privacy due to overlooking properties.

With the help of award-winning landscape designer Helen Elks-Smith, the couple were able to transform the space, adding a dining and seating area, as well as higher horizontal fencing and trees for greater privacy. 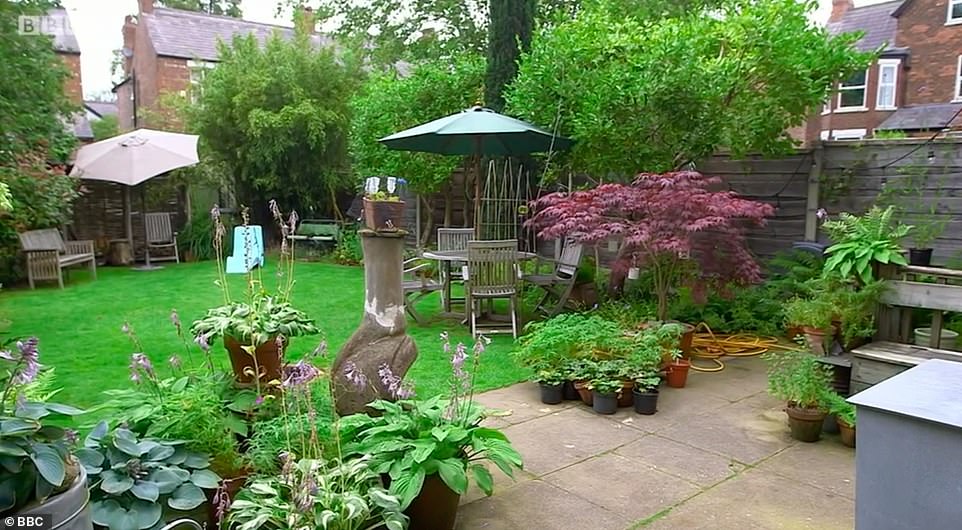 BEFORE: Mandy and Chris had lived in their stunning Manchester home for eight years but never used their north facing back garden because it was dark, ill-designed and lacked a sense of privacy due to overlooking properties 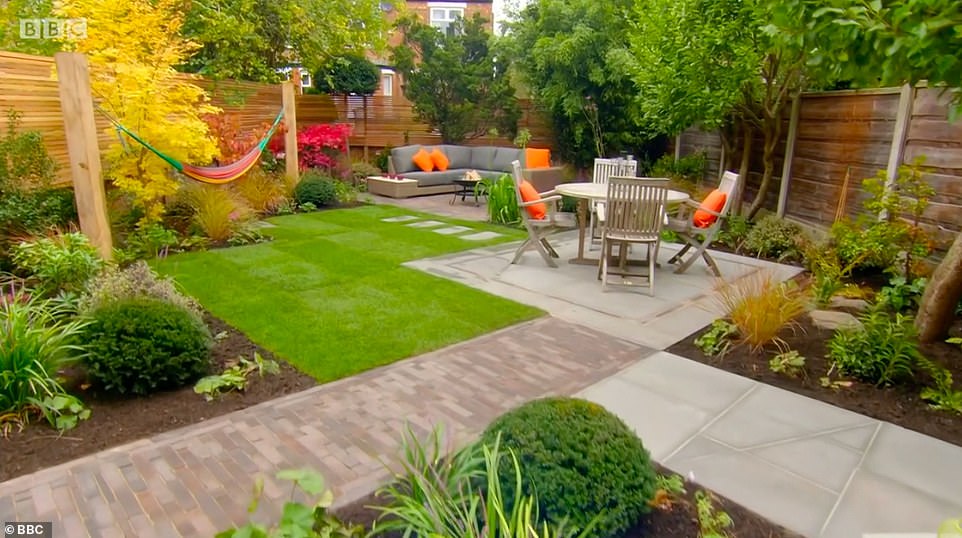 AFTER: With the help of award-winning landscape designer Helen Elks-Smith, the couple were able to transform the space, adding a dining and seating area, as well as taller horizontal fencing and trees for greater privacy 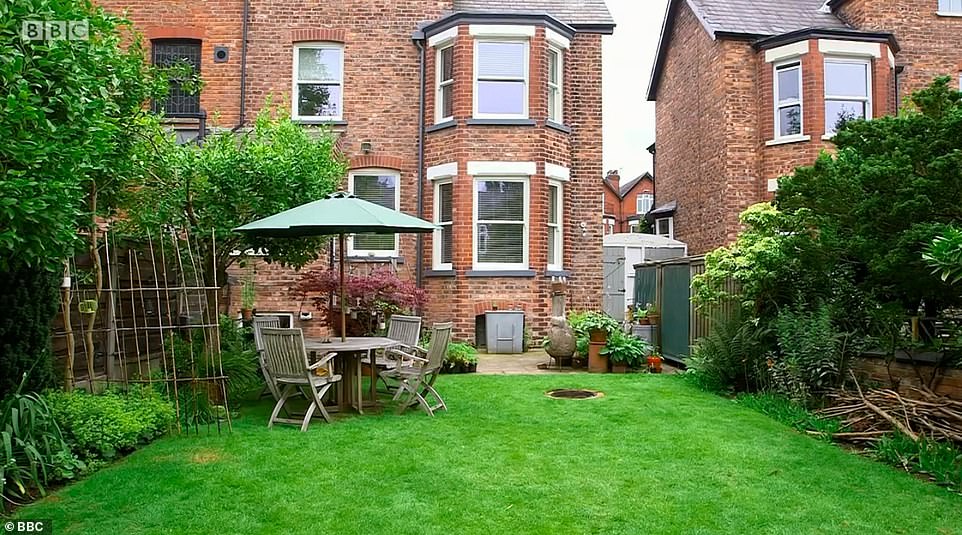 BEFORE: The couple didn’t enjoy using the garden and felt exposed due to the low fences and lack of boundaries 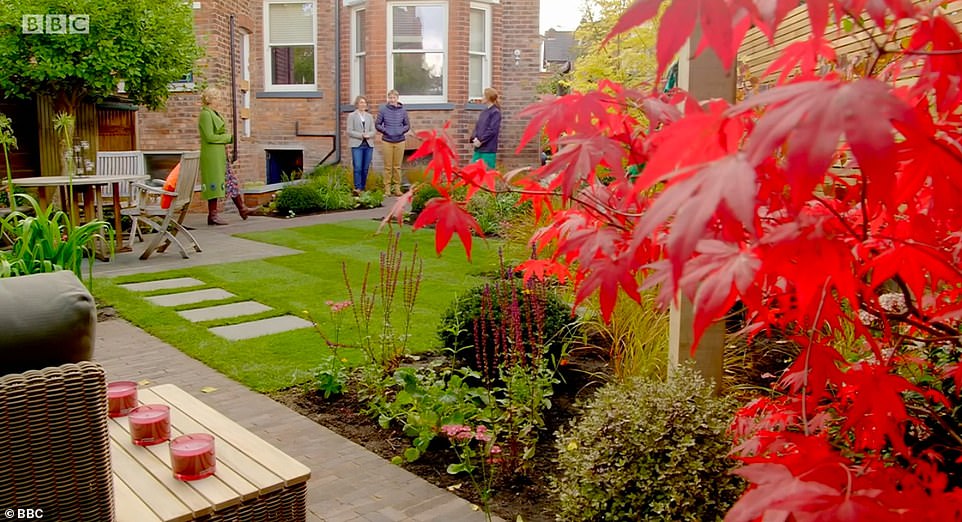 AFTER: A combination of trees and higher horizontal fencing work together to create the privacy they so wanted 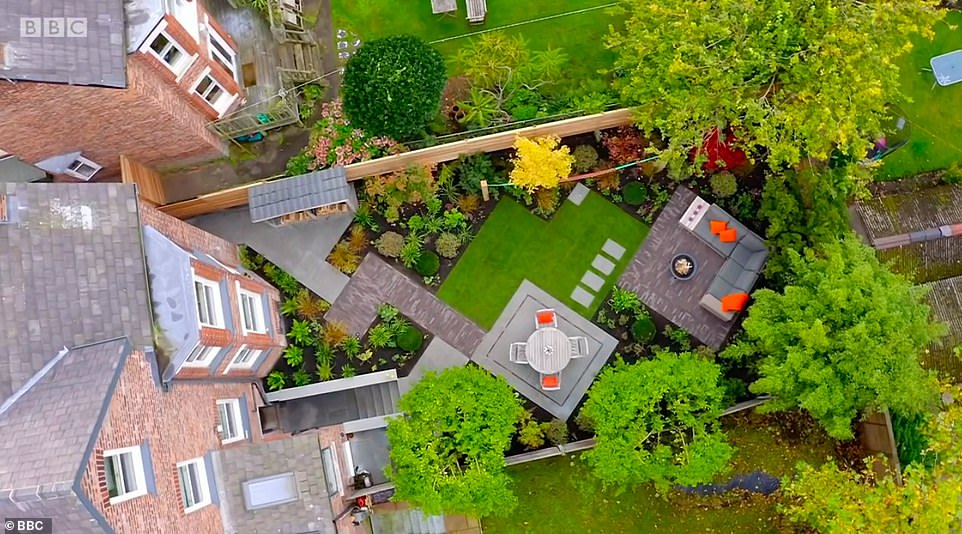 BIRD’S EYE VIEW: The design makes use of diagonals to break up the view straight into neighbouring properties

Viewers, who have so far been underwhelmed by the makeovers featured on the show, were impressed by the final result, with one tweeting they had ‘saved the best til last’.

One fan posted: ‘Love this garden. Best design and end result by far for me. My favourite thus far. #yourgardenmadeperfect.’

Another wrote: ‘Wow love the garden, that acer is stunning at the end. That’s money well spent 🙂 #yourgardenmadeperfect.’

A third tweeted: ‘Helen does the best gardens. This one ticks all the boxes and yes, big plants cost – but doesn’t it look great. #yourgardenmadeperfect.’ 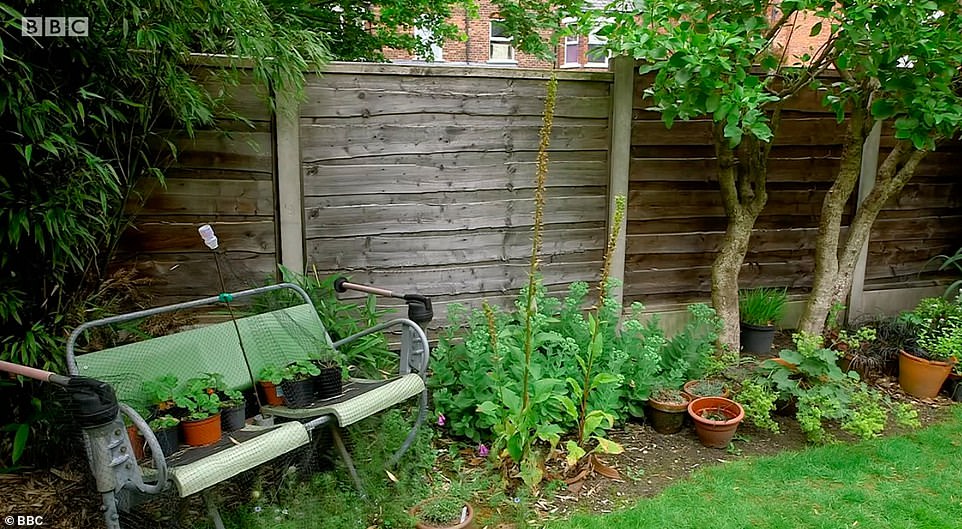 Uninviting: Mandy and Chris didn’t enjoy spending time in their garden, which is north facing and felt cold 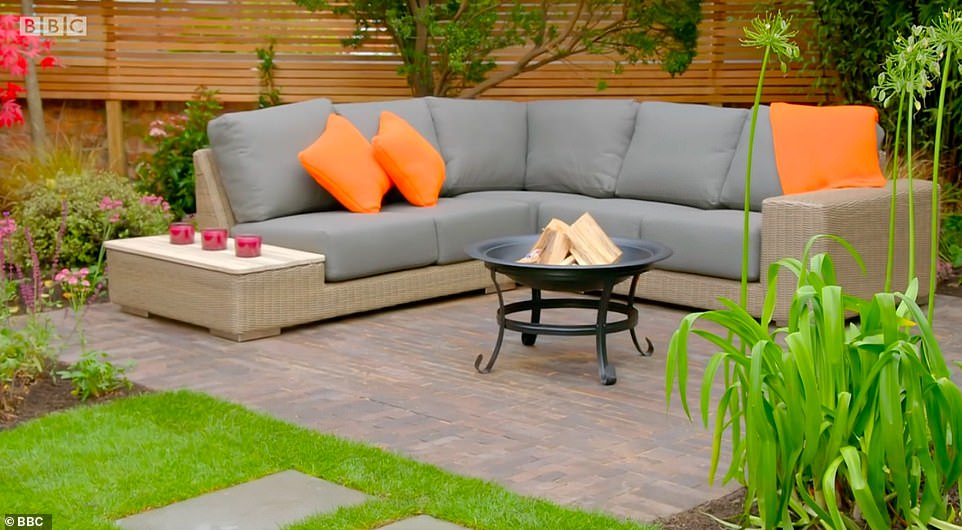 Outdoor living: The bench was replaced with a plush £3,000 outdoor sofa that’s ideal for lounging around outside 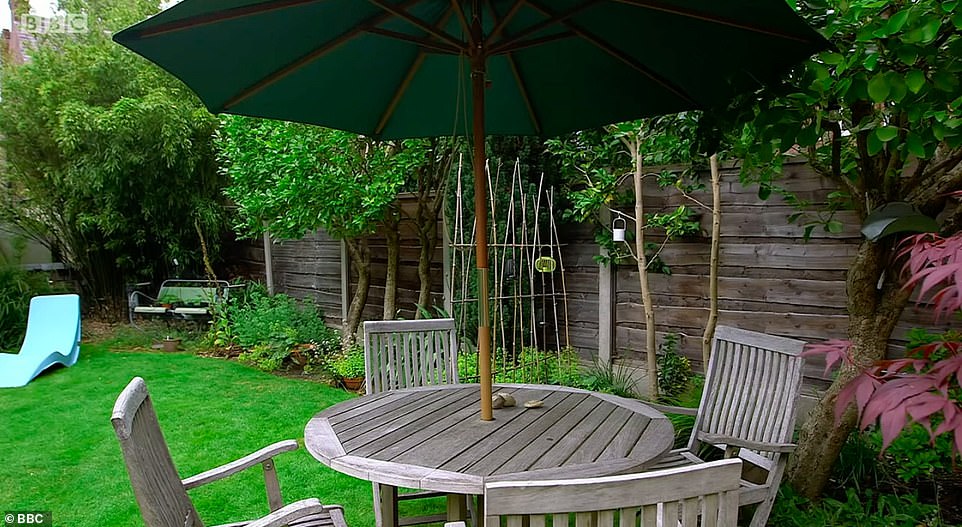 Tucked away: The garden felt dark before and the outdoor dining table was hidden away in a shaded corner 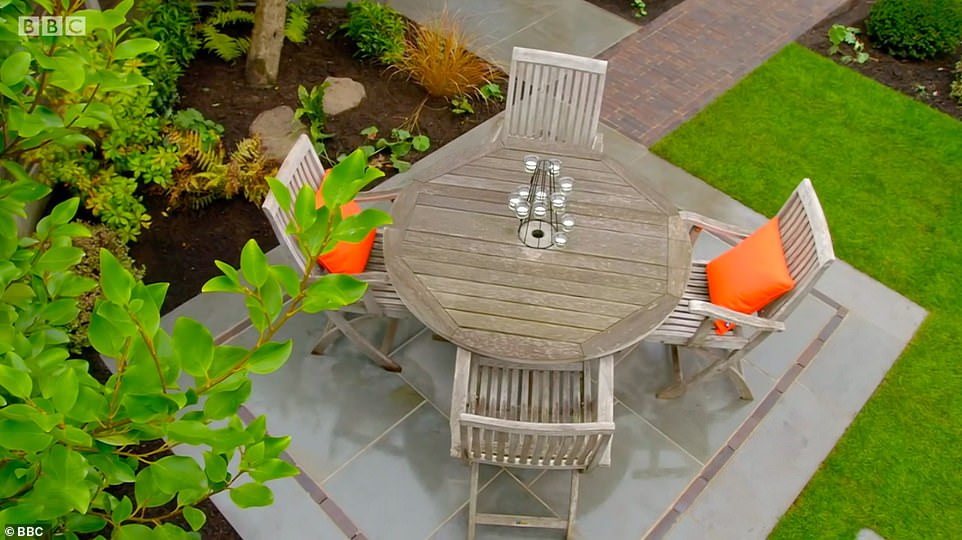 Dining al fresco: Clever tiling, as well as shifting of trees, helped bring the dining table into a brighter spot

At the start of the episode, Chris and Mandy explained their garden was rarely used because they could see into the windows of properties on either side.

They had conflicted views of what they wanted from a garden, with one wanting plenty of bright sunlight and the other dreaming of dappled shaded spots.

After viewing two computer generated designs with 3D glasses, Chris and Mandy decided on Helen’s offering. They originally budgeted £20,000 but overspent by £3,000, explaining that the extra money went on mature trees. 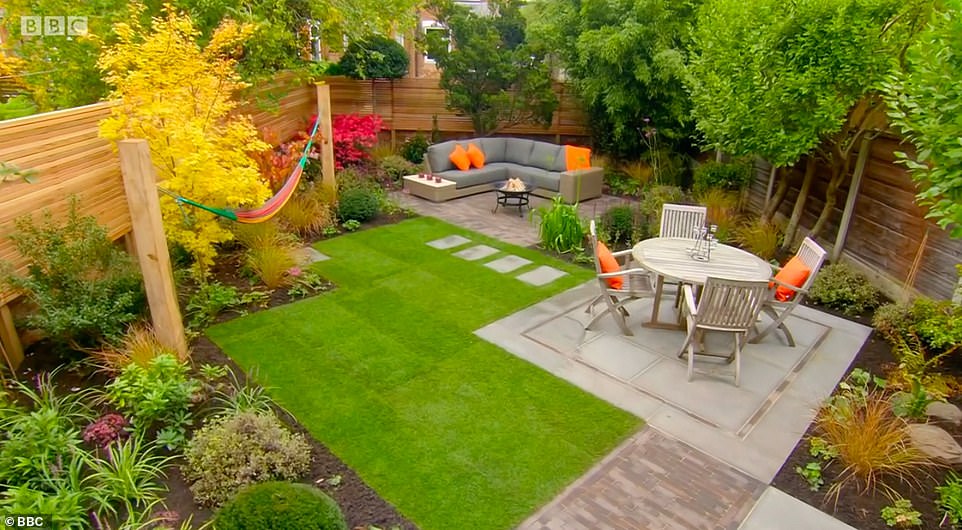 The design made clever use of 45 degree angles to break up the views directly into neighbouring gardens.

The finished result features a simple yet elegant seating area with a plush outdoor sofa and a separate dining area. The two are connected by a paved path on a diagonal.

At one side of the garden there is a chunky flower bed that again makes the most of angles and diagonal lines.

Helen added height with horizontal fencing, which offers privacy while still letting in light, and positioned existing trees as well as planting new ones in a way that creates a canopy.

Chris and Mandy were delighted with the results.