In a public conversation artist and director William Kentridge said opera is an artform of excess – there is always more going on than you can take in. 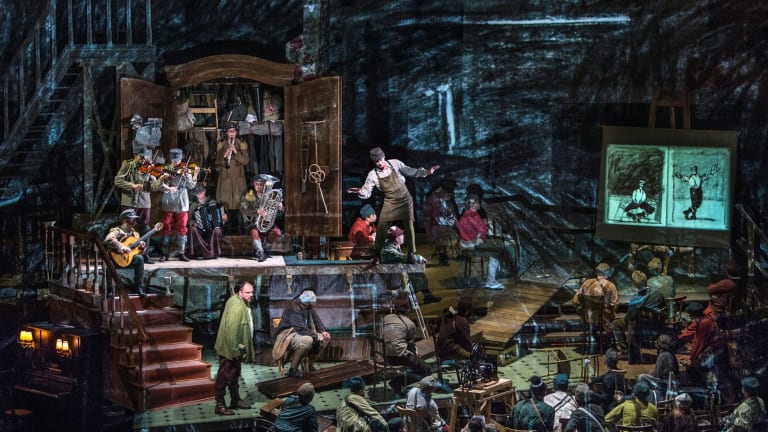 There is almost too much to take in in William Kentridge’s production of Wozzeck.

That could scarcely be more true than of the intricate counterpoint of image, music and idea in his production of Alban Berg's expressionist masterpiece Wozzeck.

Berg began the work in the dark years of World War I after the revelatory experience of witnessing the first Viennese performance of a reconstruction of Georg Buchner's incomplete play from the 1830s Woyzeck.

In Kentridge's conception, the "excessive" elements – Buchner's exploration of mental illness in a cruelly unequal world, Berg's intricately rich atonal score, his own singular hand-drawn graphics projected on Sabine Theunissen's set of wartime devastation and unflinchingly brilliant performances from Michael Honeyman (Wozzeck) and the cast – all come together to make a shattering collective statement of a truth revealed at the farthest point of societal indifference and disengagement.

With their leitmotifs (a horse, a child, a goose-step march), texture, density and stylistic references, Kentridge's drawings, projected as a mesmerising backdrop by designer Catherine Meyburgh, create a second, visual score that moves in counterpoint with Berg's music.

Some swirl with the grainy black-and-white of early cinema, some have the ironic distance of caricature, while others stare, disarming and disconcerting, like the ungainly self-portrait of a precocious child.

In the title role, Honeyman magnifies with disturbing clarity the harried derangement and haunted alienation of mental illness, making it both a deeply personal tragedy and a societal psychosis. With fluid vocal flexibility he spans the move from soaring expressive musical lines to the delirium of Sprechstimme (half-spoken singing cultivated by German expressionist composers) with ease.

Like many similar female roles, the part of Marie has the challenge of sloughing off not only the dehumanising poverty to which she and Wozzeck are subject, but also the carnal sensuality her male creators Buchner and Berg project onto her, in order to emerge as her own person.

Lorina Gore achieves this with engaging warmth and musicality, singing Berg's fleeting arches of melody with spirited colour in Act 1 and expressive remorse in Act III. As Margret her quasi alter-ego, Dominica Matthews created brief flowerings of musical personality from a world of drudgery.

John Longmuir captured the inner contradictions of the Captain's role to perfection, in a singing style of affected suavity that cracked open to hysterical shrieking at the smallest challenge to its closed world. Buckner and Berg's vivisectionist Doctor, for whom Wozzeck is an object of experimentation, represents anxiety over scientific objectification of the human, and Richard Anderson sang the role with rich strength and a persona impervious to all but his own ambitions.

John Daszak embodied toxic masculinity, 1830s style as the rapist and violent Drum-Major with barrel-chested vocal power. Berg's orchestral writing is subtly coloured and often in the background until the interlude just before the close and conductor Andrea Mollino and the Opera Australia Orchestra sustained an overarching sense of delicate coherence through the work's fragmentation, heightening individual instances and then moving on to maintain unbroken dramatic thread.

Clad dourly in designer Greta Goiris's costumes, the Opera Australia Chorus danced morbidly and sang magnificently to the sounds of the disembodied but musicianly onstage band in the tavern scenes.

The Children's Chorus blended imperceptibly into the final tableau, with the most devastating performance coming from the Child/Puppet who, with small movements of limb and downward stare, captured the emptiness of forsaken humanity.