Would YOU give your partner a ‘hall pass’? US author says husbands should offer their wives the chance to stray this Christmas – but viewers brand the idea ‘ridiculous’

A US author has claimed husbands should give their wives a ‘hall pass’ this Christmas, suggesting women are more likely to become bored of having sex with the same partner.

Dr Wednesday Martin, who is based in New York, suggested on ITV’s This Morning that couples should consider ‘consensual non-monogamy’, adding that a lot of women are ‘interested in it’.

However, presenter Vanessa Feltz described it as an ‘atrocious’ and ‘irresponsible’ idea, commenting that giving your other half a hall pass could ‘potentially be very damaging’.

Many viewers appeared to agree with Vanessa, taking to social media to brand the idea ‘ridiculous’. 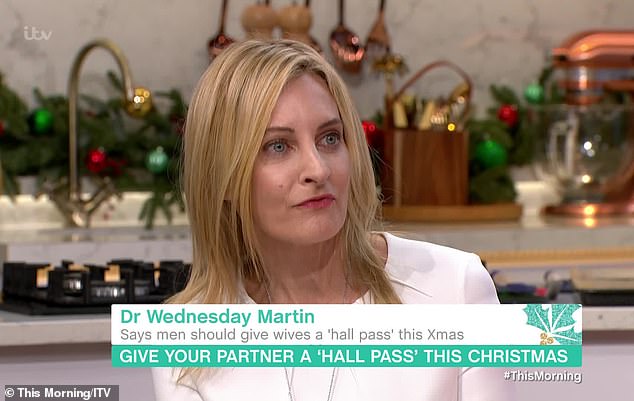 Dr Wednesday Martin, who is based in New York, suggested on ITV’s This Morning that husbands should consider giving their wives a ‘hall pass’ this Christmas

Speaking on This Morning, Dr Martin said: ‘Not everyone will want a hall pass, and to step out, but the idea of being consensually non-monogamous is on the table now in ways it hasn’t been before.  Surprisingly, a lot of women seem to be interested it.’

Explaining the concept of a hall pass further, she continued: ‘You agree with your partner: I love you, I love this relationship, but I’m also missing some thrill and adventure.

‘Should we have thrill and adventure together, some way in our marriage, or should we give each other permission to go off and do it?

Viewers were quick to take to social media, branding it as a ‘ridiculous’ idea. Other suggested people were in the wrong relationship if they wanted a hall pass

‘We’ve been told our libidos are lower than men’s, although new research shows if you measure at the right time of the month, it’s just as strong, if not stronger,’ she said.

‘What we’ve learned is that long-term relationships tend to be harder on female desire than on men – we’ve been told the exact opposite.

‘Long-term studies show that male desire ebbs slowly over the course of many years, but female desire plunges in the first four years of a relationship.

‘We used to think it was just women going off sex, but now what we know is women go off sex with the same partner.’ 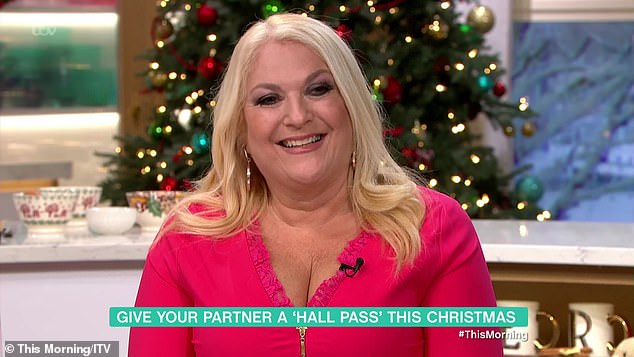 Presenter Vanessa Feltz (above) described it as an ‘atrocious’ and ‘irresponsible’ idea, commenting that giving your other half a hall pass could ‘potentially be very damaging’ 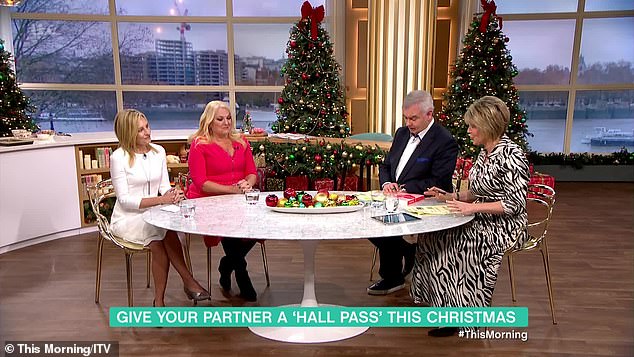 However, Dr Martin’s suggestion that men consider giving their other halves a hall pass was dismissed by Vanessa as being a ‘catastrophically, bad idea’.

‘It’s an atrocious idea. First of all, why are you in a relationship>? It’s exclusive, it’s supposed to be intimate, something that’s  precious. If it’s sexually boring, rev it up at home. There are plenty of ways to do it’.

She added: ‘You’d be passing face and loos to whoever you’re having sex with, you can’t just treat them as a sex toy. What if it blossoms into something else?’

Many viewers were skeptical about the idea, with one commenting: ‘My boyfriend would leave me rather than give me a Hall Pass’

One Twitter user said he would give a potential girlfriend a hall pass if she asked for one, but admitted they wouldn’t necessarily stay together afterwards

Many viewers agreed with Vanessa, with one many dismissing the idea of a hall pass as ‘ridiculous’.

One wrote: ‘If your (sic) not getting everything you need in a relationship then your (sic) clearly in the wrong one! #ThisMorning #ThankYouNext’.

Meanwhile, one viewer posted: ‘”A ‘hall pass’ might help us stay in a relationship”.. ridiculous! My man and granddad didn’t last 50 years together by swinging about with the couple down the road’.

However, one Twitter user said he would give a potential girlfriend a hall pass if she asked for one, but admitted they wouldn’t necessarily stay together afterwards.

This Morning airs on ITV on weekdays from 10.30am.