Deck the halls! Festivities begin at Chatsworth House as TWELVE workers manoeuvre an enormous 24ft Christmas tree through the stately home into the Painted Hall

The festive season has officially begun at one of Britain’s most beloved stately homes, as twelve workers could be seen erecting an enormous 24ft tree into the grand Painted Hall at Chatsworth House.

The stunning house near Bakewell, Derbyshire, which is home to the the home of the Duke and Duchess of Devonshire, is set to open for it’s Christmas season for the public on Saturday.

And worker appeared like Christmas elves as they began the set up at the stunning home and decking the halls with fourteen Christmas trees, including one which was 24ft in height.

The tree, which took over twelve workers to carry through the house and erect in the Painted Hall, is amoung the stunning decorations that visitors will be able to see at the stately home until the end of the Christmas season on January 5. 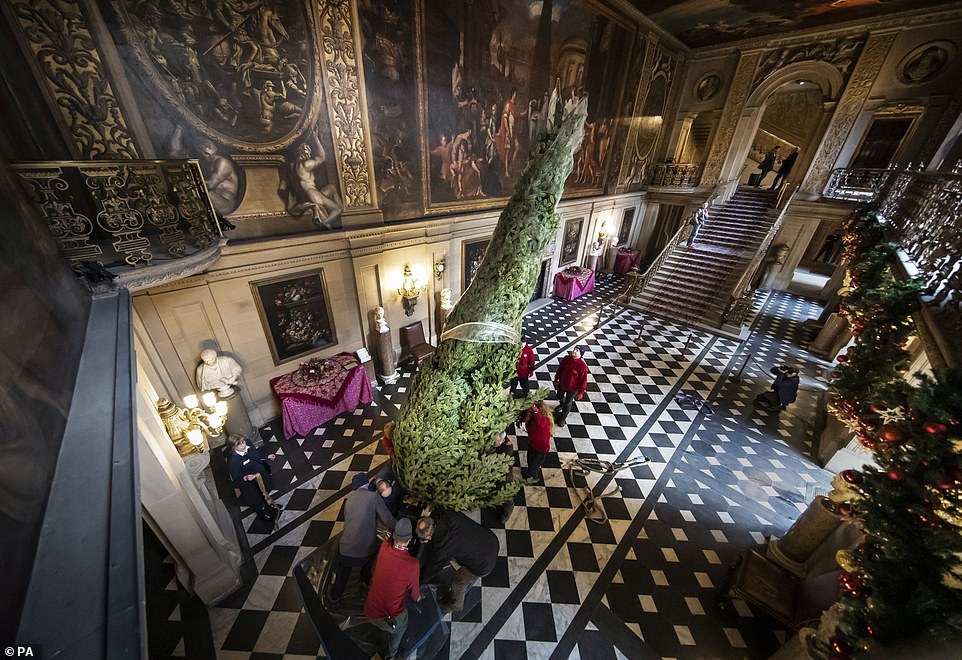 ‘Tis the season! At least 12 workers could be seen installing the 24ft Christmas Tree into the Panted hall at Chatsworth House near Bakewell, Derbyshire ahead of the stately home’s festive opening on Saturday 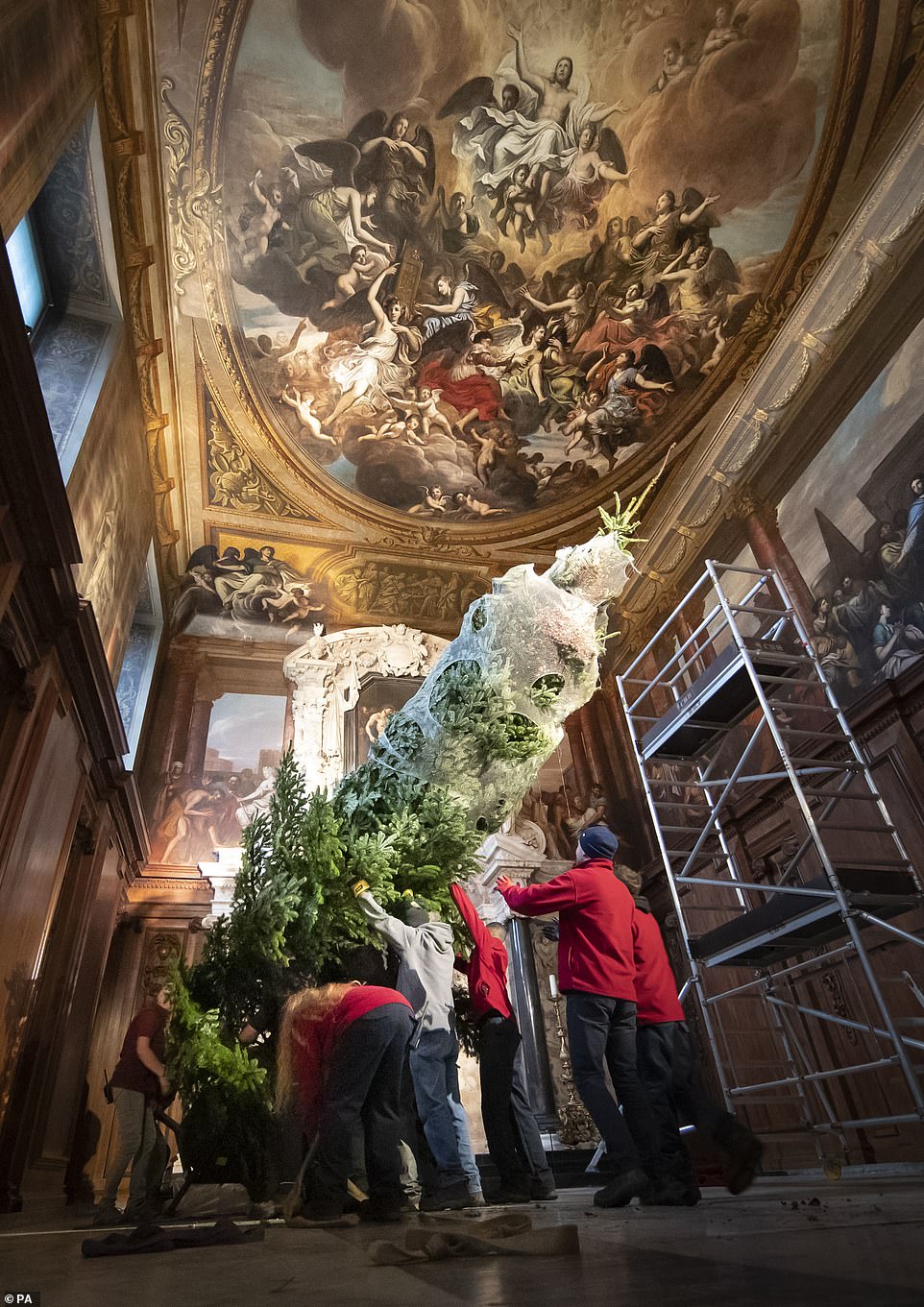 The stunning house, which is home to the the home of the Duke and Duchess of Devonshire, is set to open to the public on Saturday for it’s Christmas season, which will run until January 5 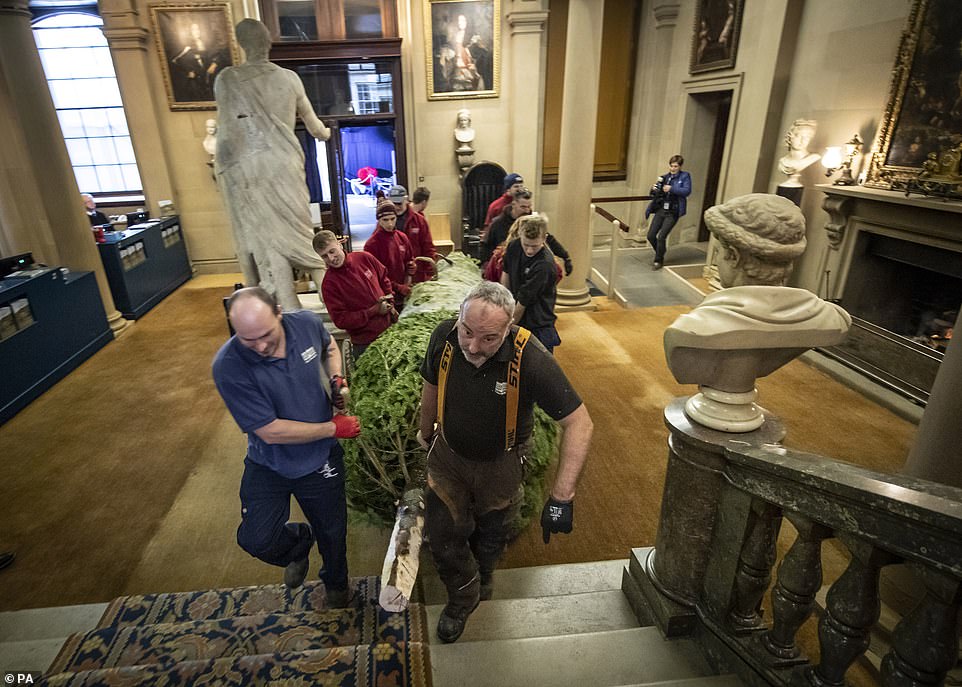 At least 12 people were seen helping to erect one of the largest Christmas trees in the property, with the help of some build-to-purpose scaffolding to help with decorations.

Ten people were seen carrying the huge tree into the stunning Painted Hall in the stately home, before manoeuvring it into position.

Built in the 16th century, the magnificent home of the Dukes of Devonshire is filled with a vast collection of art from ancient Greece to modern day.

The current Duke and Duchess collect works from the likes of Lucian Freud. Sculpture and paintings spanning 4,000 years of European culture are exhibited around the house and gardens. 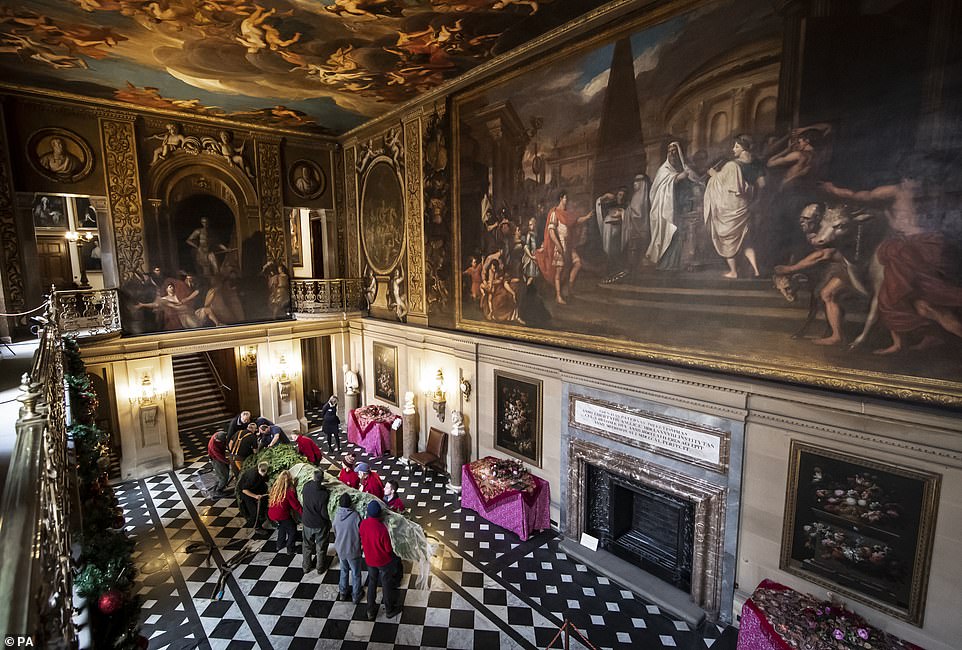 Once inside the stately home, 12 people could be seen manoeuvring the huge tree into it’s perfect position at the far end of the Painted Hall 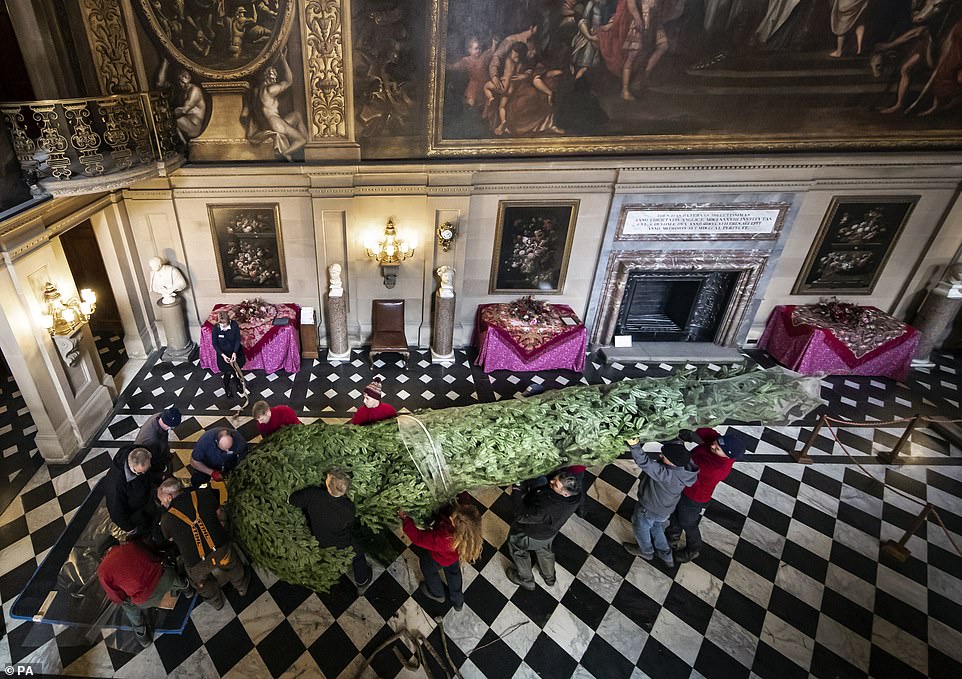 The house is set to open for it’s festive season this weekend, which will last until the January 5 in the new year.

Visitors are invited to follow in the footsteps of explorers Phileas Fogg and Amelia Earhart at Chatsworth this Christmas, with guides  leading you on a festive adventure around the globe.

Christmas tickets including admission to the house, garden, farmyard and playground come with a price tag of £25 for adults, and £15 for children.

Those wanting to visit are advised to book in advance if they want to visit the stately home, with a limited number of tickets available to purchase on the day at Chatsworth, on a first come, first served basis. 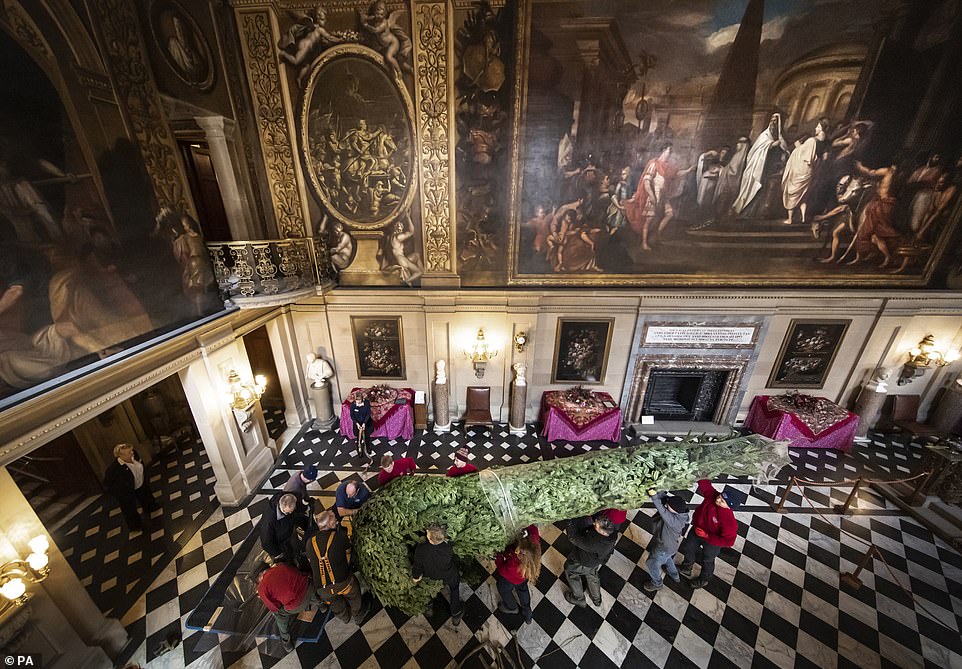 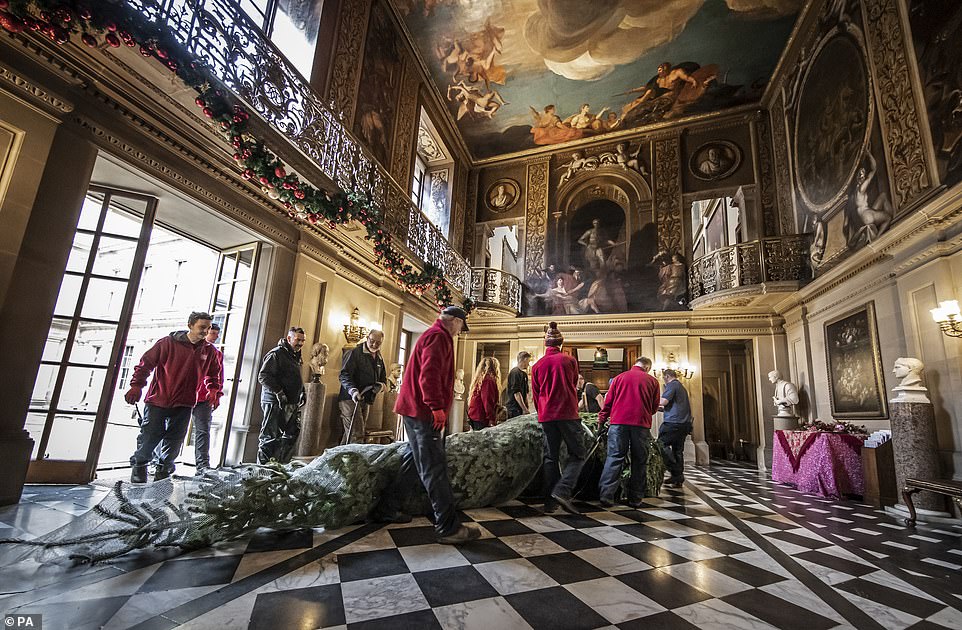 This year will also see the return of their famous Christmas markets, with over 100 stalls offering a wide range of Christmas gifts and decorations.

The house is also offering quiet days during Christmas on 13 November 2019 and 2 January 2020, where lights will be subdued, music turned off and there will be no queuing for pre-booked tickets.

Nestled deep in the country, the grand Chatsworth House will be familiar to fans of historical dramas such as Downton Abbey and was believed to have inspired one of the world’s most admired writer’s, Jane Austen.

In 2018, the house, which welcomes 600,000 visitors a year, underwent a £33 million makeover, which saw maintenance work carried out to the house, garden, surrounding parkland and roof of the property. 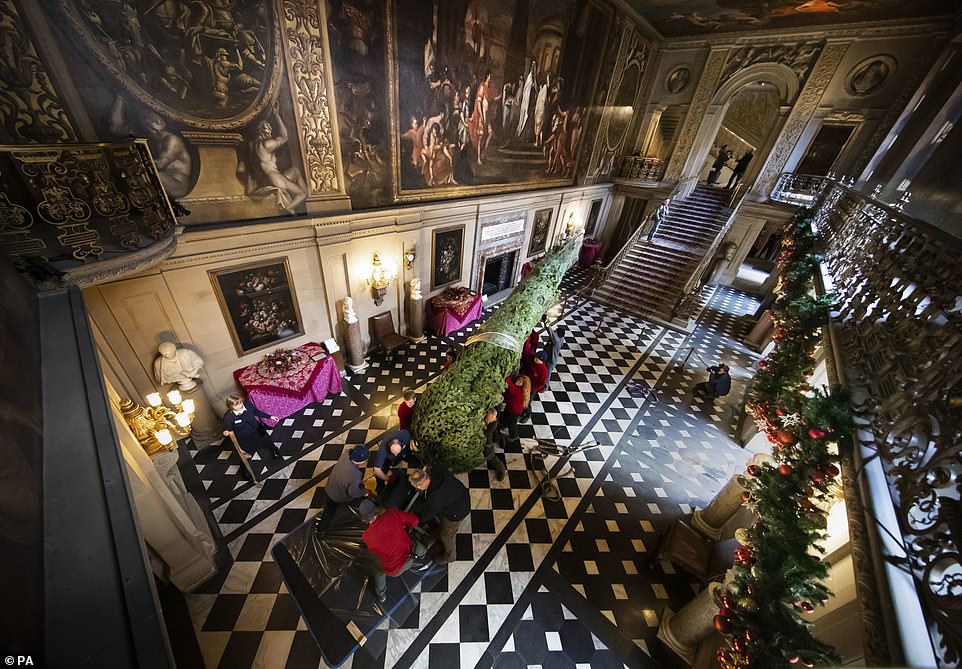 Don’t let it fall! The team could be seen adjusting the position of the enormous tree stand while they lifted the tree into position 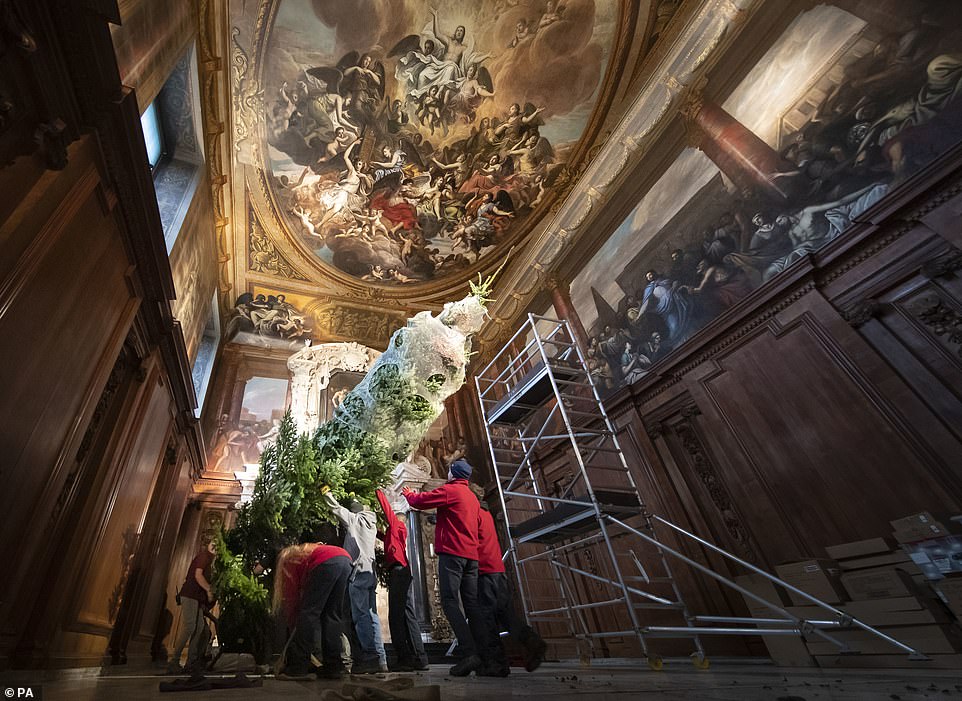