Bullied by bridezillas! Women sacked from their friends’ wedding parties share their horror stories – including one who was kicked out for ‘losing too much weight’

Three bridesmaids who were sacked from their wedding duties have shared their bridezilla horror stories.

The trio appeared on  This Morning today- where their identities were shielded by veils – and open up about the trivial reasons they’d been asked by step down from their friends’ wedding parties.

One bridesmaid, known as ‘Claire’, revealed the bride wasn’t happy when she dropped from a size 18 to a size 12, while another, ‘Cassie’, was ditched when the bride discovered she was expecting twins, and the third, ‘Plum’, was sacked for being too tall.

Speaking on the show, Claire, revealed that she was dismissed from the position when her best friend, who she hadn’t seen in years, wasn’t happy with how much weight she’d lost.

She said: ‘When I was younger at school, the friend I hadn’t seen in many many years, we were both chubby, a bit overweight.

‘Going into teens she was a size 18 I was a size 16 but we stuck together and we made a pact that if either of us got married we would be each other’s bridesmaids.

‘At the time I was working out in Ibiza and so being abroad in a hot country you lose a lot of weight quite quickly, and we hadn’t seen each other since. 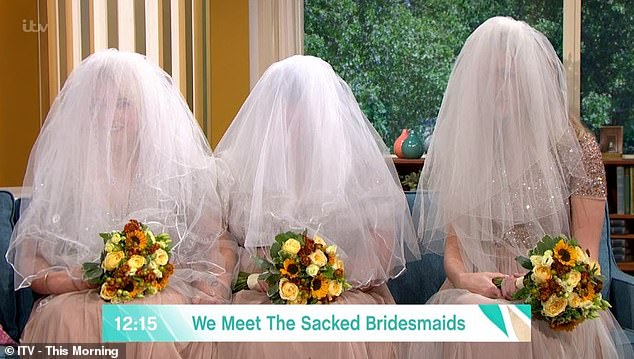 Three bridesmaids revealed the trivial reasons they were asked by step down from their friends’ wedding parties, appeared on This Morning today with their identities were shielded by wedding veils 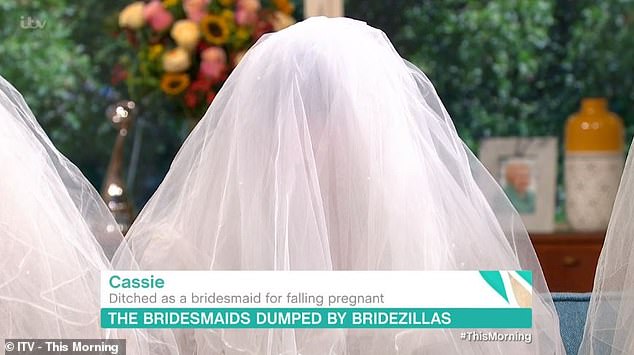 ‘Cassie’ was asked to step down as she was pregnant with twins, despise changing her wedding’s entire colour scheme ‘to suit her’ friend

‘It was really exciting I got a call when I was over there.’

However once Claire got to the dress fitting, her pal was ‘absolutely mortified’ at how much weight she’d shed, having dropped from a size 18 to a size 12.

‘I could sense something wasn’t right i had a phone call the following day – she basically didn’t want me to be her bridesmaid anymore.’

A second bridesmaid called ‘Cassie’ then went on to share her experience, revealing that she had been asked to step down after her best friend discovered she was pregnant with twins, despise changing her wedding’s entire colour scheme ‘to suit her’.

She said: ‘We’d been friends all though uni, she had been my bridesmaid.

‘I had actually changed my whole colour scheme because she didn’t like it, it didn’t suit her.

‘So when it came to her wedding she asked me to be a bridesmaid and I was super excited. Not long after I found out I was pregnant. 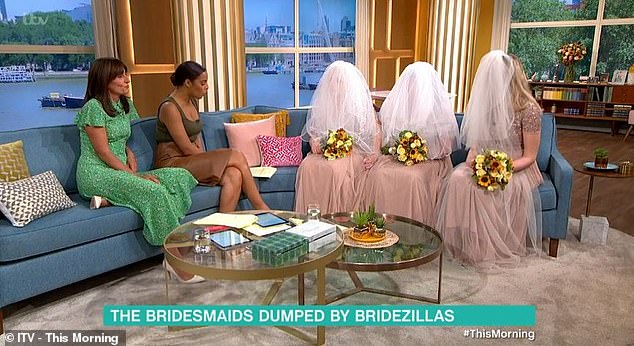 ‘After the scan Itold her I was pregnant with twins, we had a good chat about it.

‘A few days later I got a text message saying: ‘Me and my husband have been talking and we feel it’s probably best if you step down as a bridesmaid’.

Meanwhile ‘Plum’ explained that she was sacked for being too tall.

She said: ‘I was friends with a girl for six years and I was at university with her. 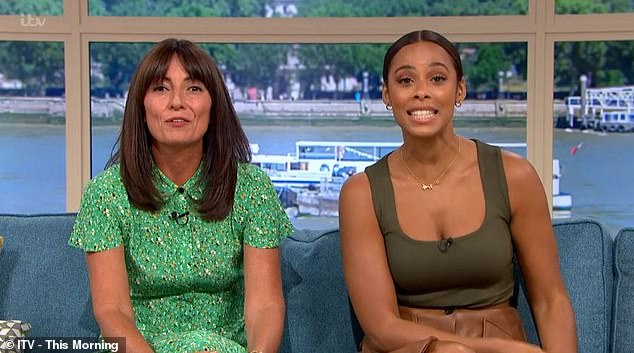 After forking out  £300 for the dress and £100 for the shoes, Plum went to a second fitting, where she was asked to pose for a photo with her fellow bridesmaids.

She said: ‘We went at our second fitting and basically the other bridesmaids and the bride were between 5ft and 5ft 4 inches, and I’m 6 foot.

‘I had 2 inch heels on, and the owner of the bridal shop wanted a photo and made a comment about my appearance.’

After the comment, Plum was asked to step down as bridesmaid, as her friend was ‘worried she would outshine her’.

Viewers were quick to take to Twitter with their reactions to the stories, with most users feeling the bridesmaids are better off without their former friends.

Viewers were quick to share their views on the stories, with one suggesting the bridezillas may simply have been jealous of the women

One said:’If your friend is going to dump you as a bridesmaid for petty reasons like this then they aren’t a good enough friend’.

Another wrote: ‘Woman on This Morning sacked from being a bridesmaid because she lost weight, and another time for having blonde hair – great insight into the world of seething jealousy that is female friendships.’

However a third argued: ‘I’d be interested to hear the brides’ side of these stories.’

Endeavor Content has struck a partnership a stake in The Night Manager and Fighting With My Family producer The Ink...

Every month brings a new astrological sign to the fore. But what does it really mean when we talk about...

Greek locals accuse migrants of trying to ‘Islamize the western world’ and say they are destroying their tourist industry as...