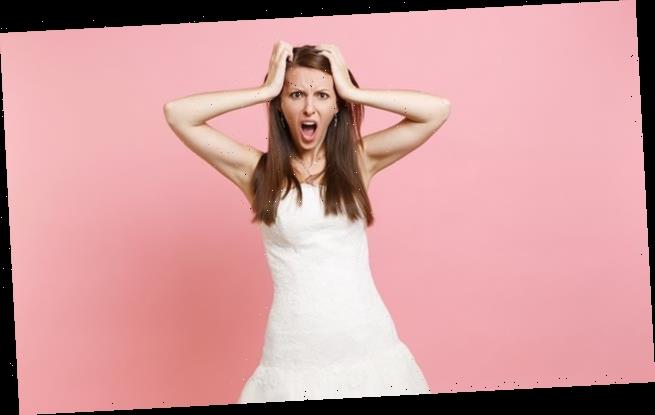 A woman has divided opinion after revealing that she’s dropped out of her brother’s wedding because she can’t take her children, prompting most of the rest of her family to follow suit.

Taking to Reddit’s Am I The A******, the unnamed woman from the US said she didn’t want to leave her kids at home while she attended the child-free celebrations, which are set to take place in another state.

She said the bride-to-be had planned a four-day-long itinerary, adding that the groom initially had no objections to children being there, but was siding with his future wife to keep her happy.

What’s more, the groom’s parents, who were helping to pay for the wedding, may withdraw their offer after so many family members decided not to come because of the no children rule.

Responses on a Facebook Wedding Shaming group were divided, with some claiming the bride is ‘within her rights’ to ask for a child-free celebration, even if it lasts for several days, while others agreed that she’s ‘crazy’ for even suggesting it. 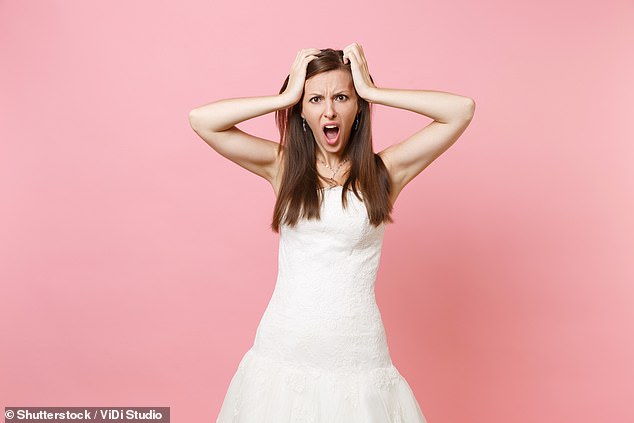 The sister of the groom explained she lost interest in attending the out-of-state wedding next summer after she heard it would be child-free.

‘I don’t want to be away from my kids for a couple of days and it is just a hassle to find them living arrangements for when my husband and I are gone – especially since most of our adult family members will be at the wedding,’ she said.

‘However, I get that it is her wedding and her decision so I just declined to go stating that I don’t want to leave my kids alone without any family to watch them,’ she added.

But the woman explained her decision to opt out of the wedding encouraged her three sisters, who have toddlers, and other cousins who are parents to also decline attending, adding it had created ‘a lot of drama.’ 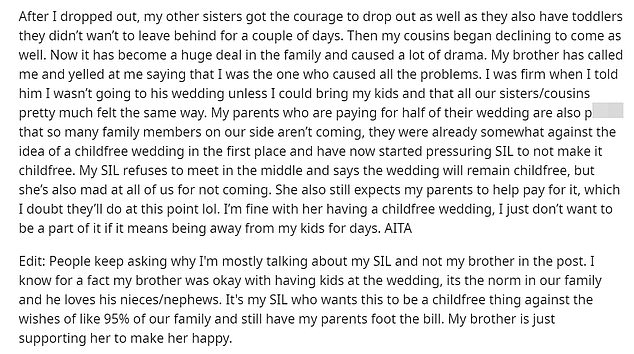 ‘My brother has called me and yelled at me saying that I was the one who caused all the problems,’ she said.

She added that her parents, who were funding half of the wedding, were annoyed at the fact so many family members had dropped out, and were pressuring the bride to allow kids to attend.

‘My sister-in-law refuses to meet in the middle and says the wedding will remain child free, but she’s also mad at all of us for not coming,’ she said.

‘I’m fine with her having a childfree wedding, I just don’t want to be a part of it if it means being away from my kids for days,’ she concluded.

In a later edit, she added that her brother was initially ok with having children attend the wedding, but had sided with his future bride to ‘make her happy.’

On Reddit, people slammed the guest, saying she was refusing to ‘meet in the middle.’ However, others said the bride should not make the wedding four-day-long

She also added that the wedding was meant to spread out over four days with six events that the bride expected to all be child-free.

‘Are all of us with toddlers and kids supposed to swing back and forth from hiding our kids in hotels with random sitters to all the wedding activities just to keep my psycho sister-in-law happy?’ the guest asked.

However, people sided with the bride, saying it was her right to want a child-free wedding, and accused the guest of refusing to ‘meet in the middle.’

‘It’s super common to have group babysitting at the hotel,’ they added. ‘All your siblings/cousins can pool resources and get a few people to stay a few hours at the hotel and watch the kids. Maybe even have your parents pay for it as part of the wedding fees.

‘If you don’t want to go, don’t go…but it doesn’t seem like you are trying to actually work something out.

Anothe criticized the woman for flippantly suggesting that her parents will withdraw their offer to pay for the event.

‘If someone was offered financial help for a wedding and then has it yanked from under them and you…LOL? Obviously you feel morally superior,’ one said. ‘Don’t go to the wedding, but hopefully you can have a little more compassion for the situation as a future sister-in-law,’ they added.

Another person said the guest sounded ‘like a horrible person, and the type of nightmare that causes many people to want childfree weddings in the first place.’

‘Not wanting to leave your children is completely understandable. However, finding it funny, saying that SHE is being unreasonable AND welcoming the sister-in-law into the family by having the whole family not attend and secretly hoping that their financial help is taken away is just cruel,’ said another.

They added the guest was behaving badly for their ‘superior attitude, lack of compassion, and starting [their] brother’s new married life off with such a horrid response to their day.’

But some people agreed the bride was being unreasonable to expect her future husband’s family to leave their children behind for four days.

‘I feel like people suggesting taking the kids and arranging child care (even if they are able to get this magical, somehow cheaper group rate) have no clue how much child care really costs. Also, factor in the cost of having to get a larger or second hotel room to bring your kids,’ one said.

‘Weddings aren’t as important as bridezillas like to think, especially now during a pandemic,’ they added.

They added that the guest ‘made it seem like the bride isn’t so much upset that her future husband’s family won’t be there to share their “special” wedding week of events, but that the parents may not pay for some of the wedding expenses.’

‘One day, sure, but multiple days? No. That’s completely and totally unreasonable both personally and financially,’ said another.

‘Four days?? I wouldn’t go either tbh,’ one person said on Faxcebook.

‘A four-day event expecting it all to be childfree is a bit much, and I’m childfree,’ one agreed.

‘I get the wedding being child Free 100 percent. But the other events….. if you expect them child free don’t expect both parents to be there,’ one said,