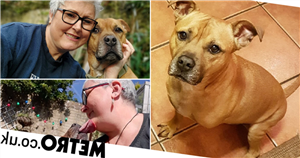 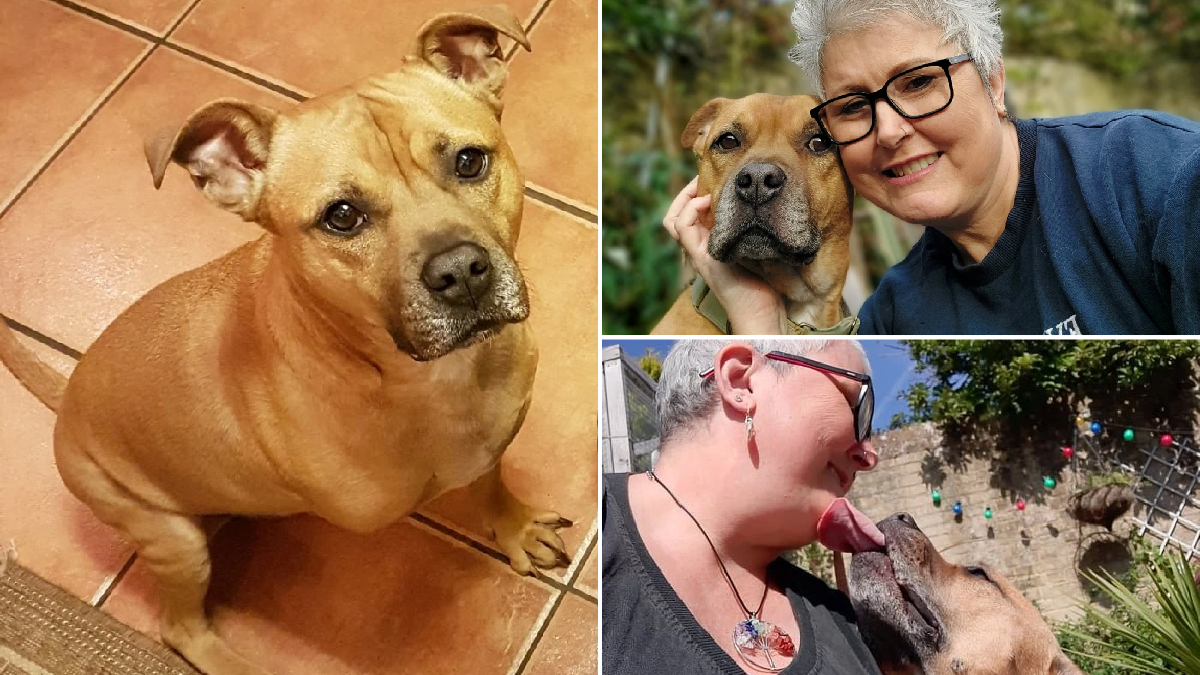 The moment Karen Ethier set eyes on her three-legged dog Louie at the dog shelter, it was love at first sight.

The 10-year-old mastiff and Staffordshire bull terrier cross had been picked up off the street and found ’emaciated and covered in bruises,’ with his leg ‘hanging off’ – which sadly had to be amputated.

However, what Karen, 55, didn’t realise was that the dog she had given a second chance to by taking him home, would go on to save her life too – by alerting her to the fact she had stage three breast cancer.

‘I knew I wanted to save him, and he literally saved my life in return. We saved each other.’ she recalled. ‘It was tough treatment to go through,’ said Karen, who lives in Cirencester, Gloucestershire, ‘but he was by my side the whole time.

‘I’m so lucky to have such a clever pup.’

Karen, who was working as the Animal Welfare Manager at the Bath Cats and Dogs Home at the time, remembers how unwell Louie was when he was brought to the shelter, back in 2014.

‘He went straight to the vet for surgery,’ she remembered. ‘They couldn’t save his leg.

‘The vet said she had never seen so many breaks in one leg.

‘It was heartbreaking to see him in that way.

‘He was so sweet, and I fell in love with him the moment I saw him.’

Now, a far cry from the neglect of his past, Louie’s family includes Karen and her other dogs – Cloey, 15, and Rocco, six, both Staffordshire Bull Terriers, bulldog Pee Wee, eight, and five-year-old Ryna the Rottweiler.

It was six years after he’d been brought home, in October 2020, that Louie first tried to tell Karen something was wrong.

As she sat in her kitchen with her friend, Helen, Louie kept ‘headbutting and nuzzling’ Karen’s chest on the same spot.

Helen suggested Karen check herself over, just in case Louie was ‘sensing’ something she hadn’t.

Later, Karen checked her left breast in the shower and ‘couldn’t believe it’ when she found a lump where her dog had been nudging.

After seeing her GP, she went for tests and doctors found that she had stage three triple-negative breast cancer later that month.

She said: ‘It was really aggressive, and I needed treatment right away.

‘They said the lump was too big for surgery, so I needed chemo first to reduce it.

‘I just stayed hopeful and took each day at a time.’

Karen, who now works at Pets At Home, underwent six months of chemotherapy followed by surgery to remove the lump and lymph nodes in her left arm, where the cancer had spread to, and three gruelling weeks of radiotherapy all with loyal Louie by her side.

‘It was really scary, but I was lucky to have some great support around me,’ she said.

‘Louie is incredibly loyal, and he knew when I was feeling down or sick from treatment.

‘He was by my side the entire time.’

Karen’s treatment was finished in June of this year, and she’s now celebrating being in remission.

‘I had a great response to treatment,’ she said.

‘I think it helps that I was caught in time and that’s all thanks to Louie.