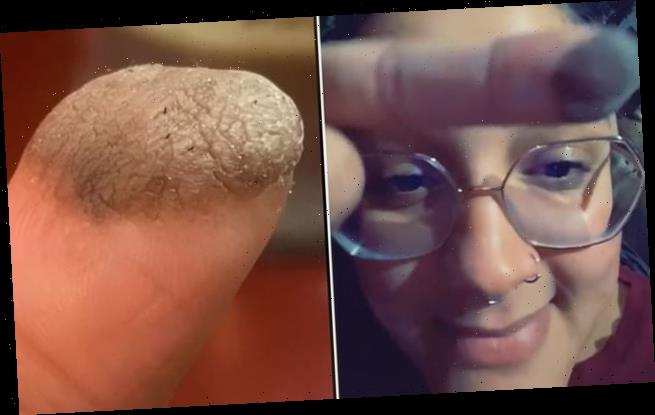 A woman who had a skin graft on her finger as a child using skin from her bikini line has revealed that she has pubic hair growing out of the tip of the repaired digit – which has also turned brown.

Mackenzie Brown, from Houston, Texas, made the startling confession in a now-viral TikTok video while responding to another user who asked people to share the ‘really weird things their bodies do’.

In the clip, Mackenzie recalled how her mother ‘slammed a door shut on her finger’ when she was just two, which ‘ripped off’ the top piece of the digit and left her in need of a skin graft. 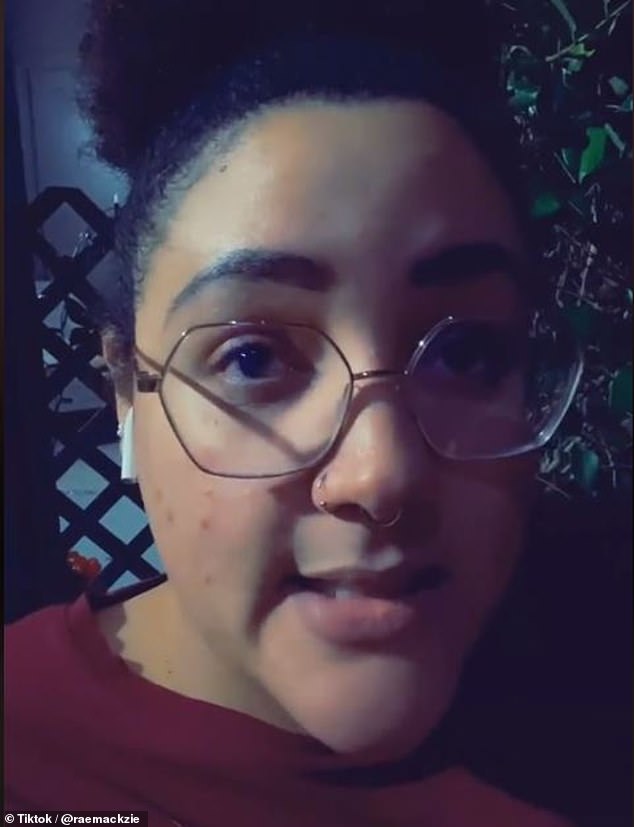 Sorry, what? TikTok user Mackenzie Brown, from Houston, Texas, went viral recently after revealing in a video that she has pubic hair growing out of her finger tip 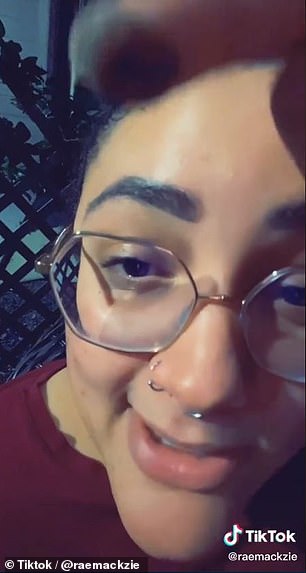 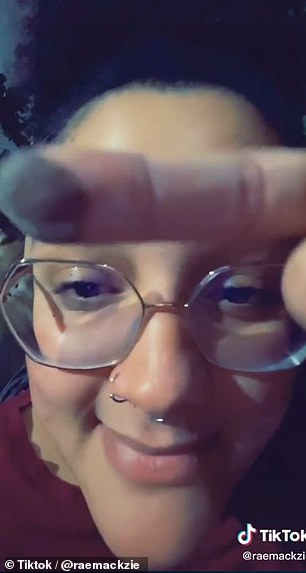 Explanation: She revealed in the clip that she had a skin graft using tissue from her bikini area when she was two years old after her mother slammed her finger in a door 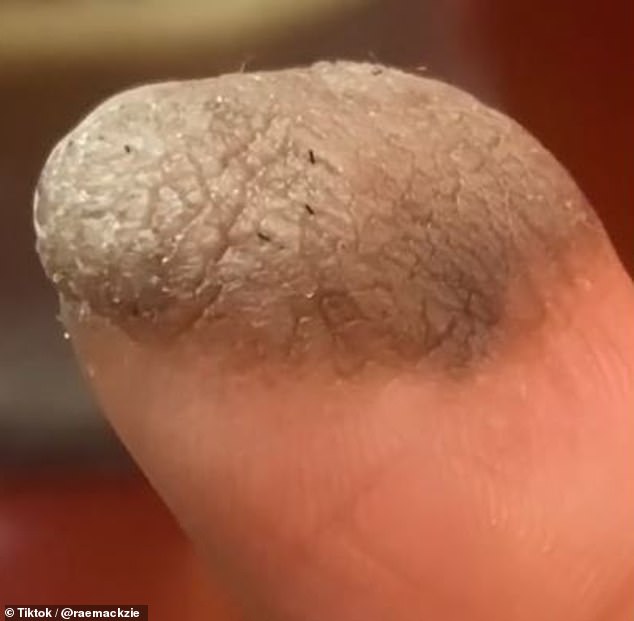 Oh no: When Mackenzie hit puberty, she noticed thick black hairs started growing out of her finger tip – which turned brown when she got her cast wet shortly after the skin graft surgery

Because of her young age, doctors decided not to use skin from her arm or leg out of fear that any scarring would grow as she got older, and instead chose to take the graft from her bikini line – a common practice for hand injuries.

‘When I was two years old, my mom slammed a door shut on my finger and it ripped off the top piece of my finger,’ Mackenzie explained.

‘This was back in the 90s and I got a skin graft. [But] instead of taking the skin from the back of my leg or a piece under my arm or something – they didn’t want the scar to grow as I grew – they took it from my groin area, my bikini line.’

Although the skin graft procedure itself went well, Mackenzie proceeded to ‘dunk her hand inside the toilet’ when she got home, which left wetness inside the cast and caused the graft to turn dark brown.

‘When I got home with the cast, I dunked my hand inside the toilet and it got wet inside the cast so my finger healed wrong and it turned brown which is really weird,’ she said.

As it turned out however, the color of the graft was by no means the strangest thing to happen to her injured digit.

When Mackenzie went through puberty, she noticed thick black hairs started growing out of the graft – and realized that they were pubic hairs.

Unsurprisingly, Mackenzie’s video quickly went viral, racking up close to 30 million views – as well as tens of thousands of comments from stunned viewers, many of whom expressed their shock over her story, while others begged her to post a follow-up with more information, and a better-lit shot of her finger.

‘I… I don’t understand,’ one person wrote. ‘Why did they take the skin from down there again?’

‘Throw the whole finger away!’ another user begged.

‘If you need to get it amputated my dad knows a guy,’ a third TikToker joked.

Many also questioned why she decided to stick her hand in the toilet when she got home from the hospital – with Mackenzie explaining that she was just messing around.

‘Why do two year olds do anything,’ she replied. ‘I was also left handed before this happened…. the fact I couldn’t use my right hand made me want to use it more.’

After being flooded with requests for more information, Mackenzie posted several other videos about her ‘coochie finger’, revealing in one how she plucks out the pubic hairs as soon as they start to appear – while in another she detailed the awkward questions she faces when getting a manicure.

But while many were left shocked – and even horrified – by Mackenzie’s unique digit, famed dermatologist Dr. Pimple Popper revealed in her own TikTok video that the condition is not as uncommon as people might think. 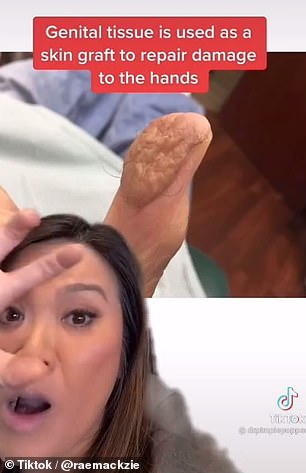 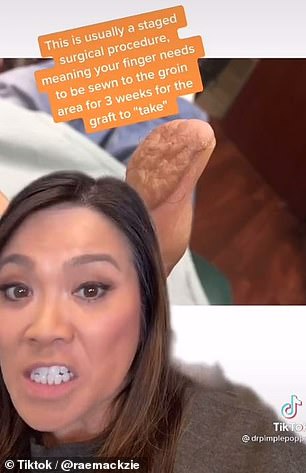 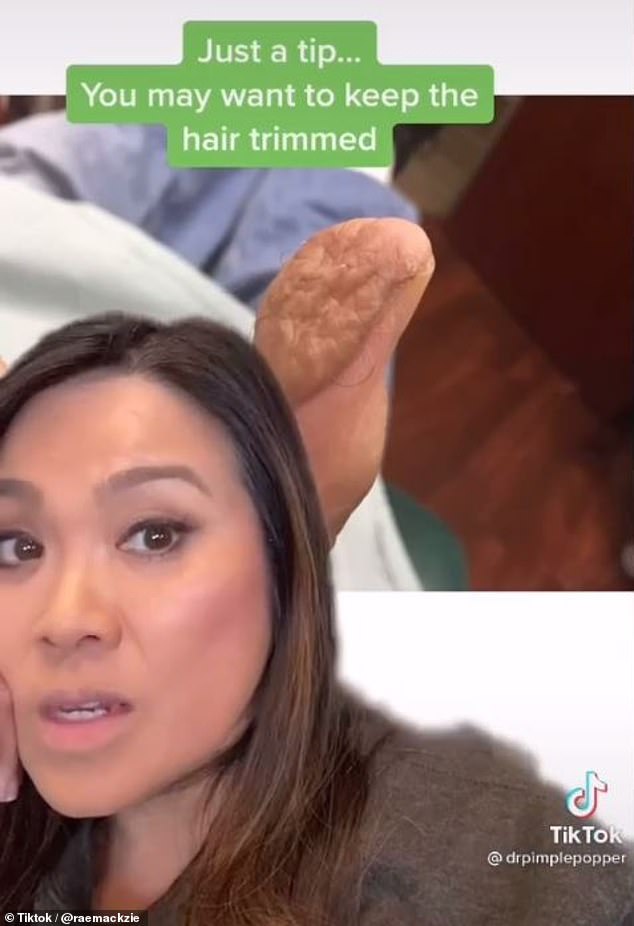 Details: Dr. Lee shared a video of a patient who had a graft on his thumb using skin from his scrotum, joking that he has ‘scrotal finger’

‘You’re not the only one with a pubic finger, or how you say “coochie finger”,’ the skin expert – whose real name is Dr. Sandra Lee – told Mackenzie, before sharing images of one of her patients who had a similar graft on this thumb and was left with a ‘scrotal finger’.

‘This person, this is one of my lovely patients who has a scrotal thumb,’ she revealed.

According to Dr. Lee, hand injuries are often repaired using skin from the genital area because it is known to be particularly malleable, and therefore won’t impair the patient’s range of movement, or growth in the years after the procedure.

‘It’s not uncommon to see genital tissue used as a graft to repair trauma that has occurred on the palmar surfaces of the hand,’ she said.

‘This tissue we know is more stretchy, more moveable, and we need that in this very hyper mobile area.’

Dr. Lee went on to explain that more serious grafts can involve the patient having to have their finger sewn to their groin in order to make sure that the skin graft won’t be rejected by the body.

‘This is often a staged surgical procedure, meaning your finger needs to be sewn to the groin area for three weeks for the graft to “take”,’ she said.

The TV star concluded her video by offering some advice to Mackenzie: ‘You may want to keep the hairs trimmed there or plucked. They are technically pubic hairs and also in the cold there is definite shrinkage.’