Woman, 32, who developed a rare facial spasm while pregnant that now happens several times a day and lasts up to five minutes reveals how it makes her feel ’embarrassed and unattractive’

A woman has told how her pregnancy three years ago marked the start of a traumatic condition – which she may have to treat for years to come.

While pregnant, Rhiannon Reid, 32, from Gloucester, who lives with husband Jamie, 32 and their sons Hugo, 3 and Rui, 1, began to suffer with hemifacial spasms – a rare facial spasm which runs along the side of her face and affects only approximately just 8 in 1,000,000 people in the UK.

‘It was very frightening at the start as I had to go for an MRI on my brain – thank God everything was clear, and it was then put down to spasm. It was a very scary time,’ she explained.

‘I have not been overly concerned about beauty and image until now this has started, as it has made me very anxious about my appearance and how it will effect the aging of my face. 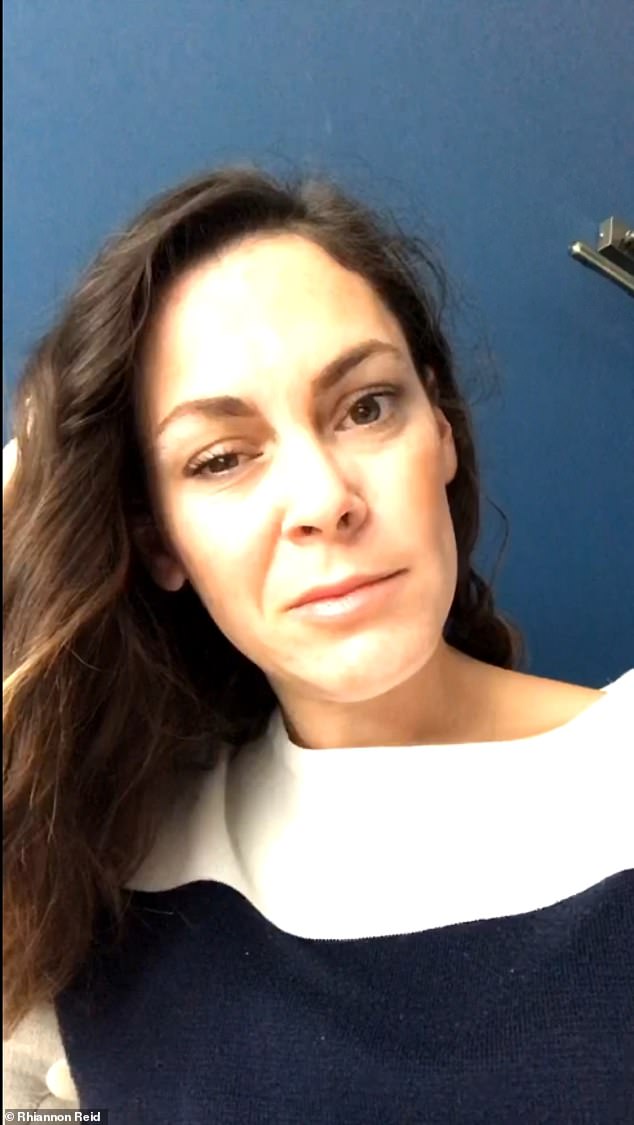 Rhiannon Reid, 32, from Gloucester, who lives with husband Jamie, 32 and their sons Hugo, 3 and Rui, 1, began to suffer with hemifacial spasms when she was pregnant three years ago 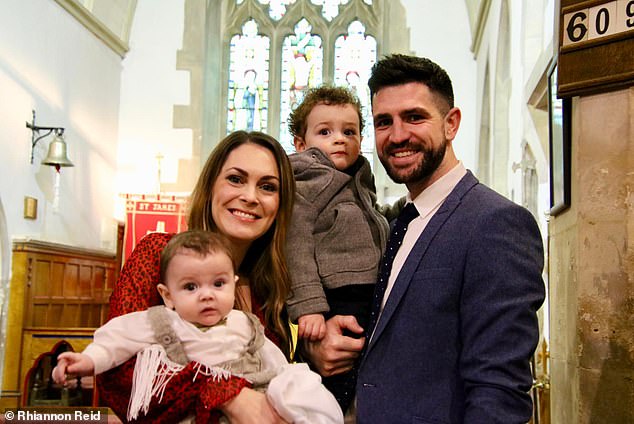 The mum-of-two suffers a rare facial spasm which ran along the side of her face and affects only approximately just 8 in 1,000,000 people. Pictured, with husband Jamie, 32 and their sons Hugo, 3 and Rui, 1

‘Also when it comes to appearance and movements on your face you cannot hide it away. So this has become quite a distraction for me, both mentally and physically.’

The mother-of-two says the spasm 100 per cent affects her vision and that at its worst she has to stop everything – she couldn’t change a nappy, or continue to cook or write, but rather now needs to take complete caution in all she does.

Rhiannon can suffer from the spasm several times a day, has no control over it and it can last up to five minutes each time.

‘Many people have experienced a slight twitch in their eye if they are very tired or stressed,’ she said. ‘The difference with me is that the whole of my eye shuts in spasm. I cannot control when it happens, or make it open again.

‘As time has gone on, the spasm has moved further down my face so the side of my lip and nose would also vibrate.

‘It’s like a really heightened version of a very tired twitch and is completely sporadic. In fact sometimes I don’t even realise it is happening – and someone else points it out.

WHAT IS A HEMIFACIAL SPASM?

Hemifacial spasm is a nervous system disorder in which the muscles on one side of your face twitch involuntarily.

Hemifacial spasm is most often caused by a blood vessel touching a facial nerve.

It can also be caused by a facial nerve injury or a tumor. Sometimes there’s no identifiable cause.

‘When it happens I just have to pull myself away from whatever I am doing.’

She added: ‘The worse times are when I go to bed and relax – as not doing anything I can feel it more.’

‘And when focusing on computer or very engaged say in a meeting at work. I can feel it going crazy.’

Rhiannon, who works as a marketing co-ordinator, says that her condition can be incredibly embarrassing in the workplace.

‘When I am really focused on work or my computer I can feel it going crazy,’ she explained. ‘But as it could happen at any point in the day I do warn people who don’t know me – I try to joke and say I am not winking at them!

‘I explain I have a spasm but sadly when it comes to my appearance, it is simply not something I can hide.’

‘Internal colleagues are now used to seeing the spasm but every time I feel it moving, I find myself apologising that it is happening “sorry guys just having a Popeye moment!”

Rhiannon went on to say she often has to stop driving as she does not feel safe.

‘It takes all of your concentration away,’ she explained. ‘So with my two boys in back on the motorway I just have to pull over and take a 10 minute break.’

Rhiannon says the best thing she can do when her left eye closes is to shut both eyes and let time pass.

‘It is 100% affecting my self confidence,’ she added. ‘There is no beating around the bush when my spasm hits, it makes me look hideous.’

‘I videoed myself once and sent it to some girlfriends, I remember looking back and crying worried about how unattractive it makes me look, does it affect how my husband looks at me?! 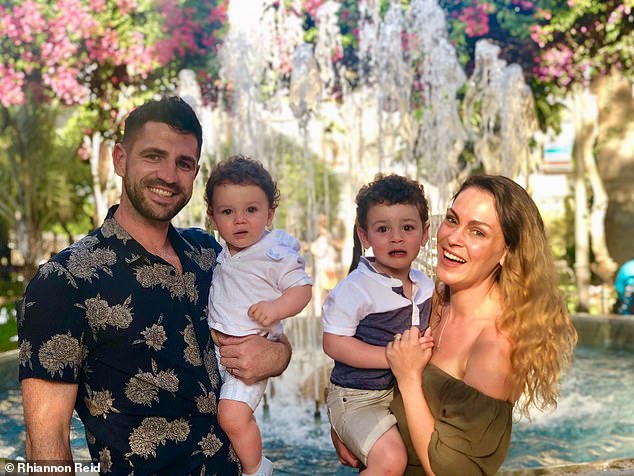 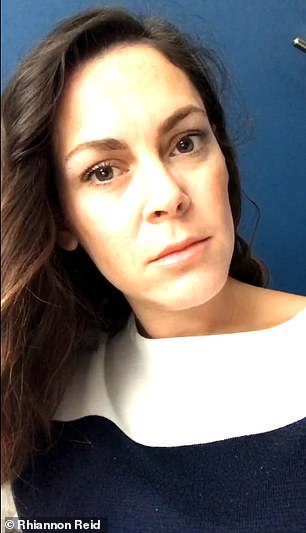 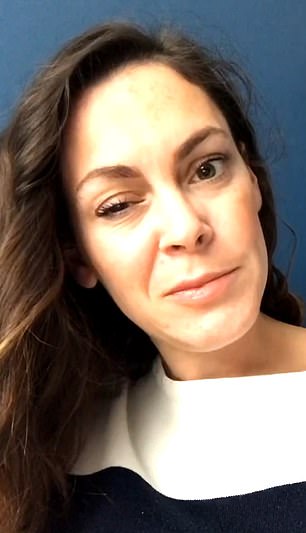 Rhiannon Reid, 32, from Gloucester, who lives with husband Jamie, 32 and their sons Hugo, 3 and Rui, 1, began to suffer with hemifacial spasms when she was pregnant three years ago (pictured left, before, and right, during)

‘It creates so much anxiety, unfortunately my mind goes into overdrive and leaves me thinking, is this just the start, can it worsen? Is this going to affect my appearance even more in the long term?!

She continued: ‘It also bothers me whenever photos are being taken or videos are being recorded with my family. My spasm can destroy the happy memories (in my mind) when looking back at pictures or footage.’

In terms of medical treatment, she is now having regular botulinum toxin injections to manage the spasm.

Over some months she and her medical team at specialist eye hospital group Optegra have worked out the location and frequency of injection to get levels exactly right.

He explained: ‘Rhiannon has a Hemifacial Spasm, an overactive facial nerve which causes twitching of one side of the face. 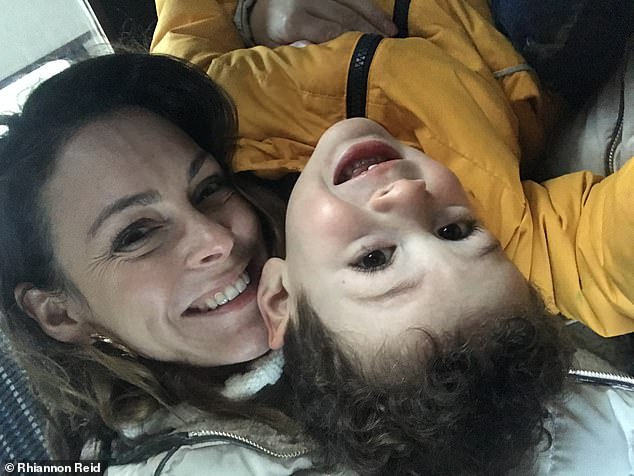 ‘It usually starts in the lower eyelid and spreads to encompass the whole side of the face. It is the nerve that is responsible for controlling the muscles of facial expression.’

In terms of treatment options, he added: ‘If an abnormal blood vessel can be identified, the pressure on the nerve can be relieved with a neurosurgical procedure.

As for the cause, Mr Saha explains that it can be connected with times of high stress and that it can sometimes be caused by abnormal blood vessels compressing this nerve but often no clear cause is identified.

Whilst Rhiannon’s case began during pregnancy, there is no clear connection between the two.

Mr Saha says there are poorly understood influences of hormonal changes in pregnancy that may well influence this condition and also indeed the opposite – i.e. paralysis of facial muscles which is called Bell’s Palsy.

Now, Rhiannon visits Optegra regularly for injections with the team she trusts and who have been very thorough to know the exact treatment she now needs in order that the twitch is now 90% managed, with just some symptoms when she works.