The 12 paragraphs in the Uluru Statement from the Heart fit neatly on the cover of Midnight Oil's new mini album, The Makarrata Project.

Only Midnight Oil, who travelled deep into Australia's outback prior to 1987's Diesel and Dust album, are savvy enough to take this opportunity. Albums commanding as much interest as The Makarrata Project are few and far between and the Oils have seized upon the "unfinished business in Australia", as Peter Garrett recently called it, to put the Uluru Statement front and centre. 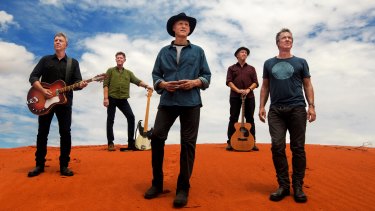 Midnight Oil’s new album The Makarrata Project will be released on October 30.Credit:ABC

A powerful reading of the statement, featuring former AFL footballer Adam Goodes, journalist and filmmaker Stan Grant, musician Troy Cassar-Daley, actress and singer Ursula Yovich and human rights advocate Pat Anderson is at the heart of the album. Surrounding it is Midnight Oil's own statement.

The band's first new music since 2002 album Capricornia, it leads off with the driving synth and drum groove of First Nation, reminiscent of their more experimental sounds on 1998's Redneck Wonderland. It doesn't really matter if it's 1978, '98 or now – when Garrett's voice kicks in there's simply no mistaking Midnight Oil. Jim Moginie could be pushing buttons on a synthesiser, playing piano or locked in a twin guitar attack with Martin Rotsey and it's still going to have the Oils' unmistakeable DNA at its core.

Featuring guest appearances from Jessica Mauboy plus rapper and Gumbaynggirr man Tasman Keith, First Nation bristles with barely-contained anger, Garrett asking the questions,"When we gonna start the conversation?" and "When we gonna say the word invasion?" 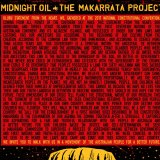 On the no-nonsense Gadigal Land, the first single released in August, there's a tough-as-nails Head Injuries-era feel. It comes with a healthy dose of the band's early punk rock energy, mixed in with a big, brassy splash of colour and guest vocalist Dan Sultan unleashing one of the best recorded howls in recent memory. Sultan also appears on Change the Date, alongside the late Geoffrey Gurrumul Yunupingu – but more about that song soon.

Indigenous voices, including Alice Skye as the sole vocalist on Terror Australia, and the Uluru Statement itself, are at the centre of this diverse collection of songs. In total, there are 16 different Indigenous voices across the album, including Mirning elder Bunna Lawrie who contributes a welcoming in his own language and elevates Gadigal Land to one of 2020's mightiest songs.

"We love rock music," Lawrie told The Age and the Sydney Morning Herald. "Music is healing to us. When we play we heal the land, we heal our people, we heal anyone who wants to get up and dance with us."

Change the Date features a previously unreleased vocal track called Lorrpu (white cockatoo), by Yolngu man Gurrumul, which sits alongside Garrett and Sultan's voices. This, perhaps better than any moment on the album, speaks to the sense of purpose Midnight Oil has towards Makarrata – a Yolngu concept that means peace after a dispute.

Desert Man, Desert Woman, with Frank Yamma, shifts the mood down a couple of gears, while Wind in My Head features singer, songwriter and old friend of the band Kev Carmody, plus Warumpi Band's Sammy Butcher.

Across seven tracks, it's a gathering of folks with a shared purpose.

Stunning desert scenes accompanied Midnight Oil in mid-1980s video clips for The Dead Heart and Beds Are Burning, when the band first began using their popularity to speak up for First Nations people. This richly collaborative album raises those voices, highlighting the need for the wider Australian public to join talks about justice and reconciliation, as Garrett sings in First Nation.

The Makarrata Project is available from October 30.