At the Sydney premiere of Netflix film The King last week, presenter Margaret Pomeranz urged potential viewers to see the movie in cinemas, suggesting its bloody swords-and-horses spectacle benefited from the big-screen experience.

It seemed an uncomfortable request considering Netflix's subscription-based business model. For the film's Australian director David Michod, caught between his artistic vision and the company line, the question was more complicated. 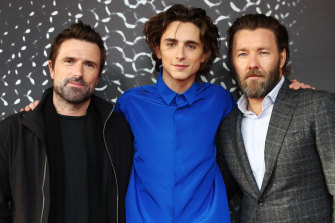 David Michod, Timothée Chalamet and Joel Edgerton at the Australian premiere of The King in Sydney on Thursday.Credit:AAP

"Yeah I want them to [watch the film in cinemas] if they want to," he said. "But I really like not feeling at the mercy of the box office.

"I actually love the way this one's getting released – that it's getting a theatrical release and if you want to seek it out you can. But we won't be sitting around waiting for the box office figures to roll in 'cause there's a larger strategy at play."

That strategy, of course, was for the streaming giant to gain and keep subscribers. The King, which opened in cinemas on Thursday, would also debut on Netflix on November 1. So if the box office was negligible, did Michod know what constituted a success? Did Netflix communicate what was expected of the film; a certain number of streams or clicks?

"No and that's what I love about working with Netflix," he said.

"It's never been presented to me like there are commercial benchmarks I need to hit. I mean they've managed to attract the best filmmakers in the world – Martin Scorsese's making movies for them now – and part of why that is, is because they're resourcing movies properly and they're just letting filmmakers do their thing."

Scorsese, whose The Irishman was due to open in Australian cinemas on November 7 before debuting on Netflix on November 27, had a similar response when questioned on his decision to make a deal with the streaming giant.

"There's no doubt that seeing a film with an audience is really important. There is a problem, though: we have to make the film," he said ahead of The Irishman's screening at the BFI London film festival on the weekend.

"We've run out of room in a sense; there was no room for us to make this picture for many reasons. [But] having the backing of a company that says that you will have no interference, you can make the picture as you want – the trade-off being it streams, with theatrical distribution prior to that. I figure that's a chance we take on this particular project." 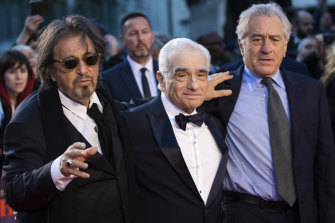 Martin Scorsese, centre, with stars Al Pacino, left, and Robert De Niro at the premiere of The Irishman in London on Sunday.Credit:Invision

Netflix – which was projected to spend about $US15 billion ($22 billion) on original content this year – has pushed the pedal on its feature-film goals following the Oscars success of its Roma, an Alfonso Cuarón-directed drama, last February.

Alongside The King and The Irishman, a batch of films acclaimed at recent festivals were due to hit the service in the coming months; including Noah Baumbach's Marriage Story (November 14 cinemas; December 6 Netflix) and Fernando Meirelles' The Two Popes (December 5 cinemas; December 20 Netflix).

The "unprecedented" situation appeared mutually beneficial to Netflix and filmmakers, said Bruce Isaacs, a senior lecturer in film studies at the University of Sydney.

Netflix understood it could branch out and change a key part of its audience demographic; moving away from mainstream pop culture into a sort of cineaste audience we think of with arthouse cinema.

"Originally this was all cast as Netflix making a move into a more esteemed form of cinema, branching out from TV. But David Fincher's Mindhunter changed the game a bit," said Dr Isaacs of The Social Network director's acclaimed series.

"That was an auteur at the highest level choosing to go to Netflix after being turned down by studios for the project. And from there, I think, Netflix understood it could branch out and change a key part of its audience demographic; moving away from mainstream pop culture into a sort of cineaste audience we think of with arthouse cinema."

"Firstly, with Netflix their algorithm is secret; they're protective over the way data is used to define what works and what doesn't in a commercial context so nobody quite knows exactly how that model works.

"And so for filmmakers they're not being beholden to a single figure at a box office moment – for example, opening weekend or even opening night. Those kinds of increasingly tight and mechanistic benchmarks of what a movie can do simply can't apply to the kinds of releases Netflix present; what they're striving for is longer term and repeat access. It's just a completely different model."

The Irishman's upcoming release would be a telling moment for Netflix's film goals, said Dr Isaacs.

"With Scorsese it's hard to know what's the difference between The Irishman making, say, $US300 million at the box office versus being the biggest Netflix title in its history to this point… I think in terms of reaching a pop culture demographic and in terms of financial success you've got to think Netflix is a serious competitor with the largest American film studios."