‘The doctor warned me I could die, but I told him “at least I’ll look good in my coffin’: Why this 80-year-old great-grandmother spent £10,000 – and risked her life for a face lift

It was only when, strip by strip, the bandages were peeled away that Toni Goldenberg finally knew for sure. Tentatively, she touched her neck. Then, as a mirror was held up to her newly exposed face, she gasped in delight. A miracle was staring back.

At the remarkable age of 80, the great grandmother had just undergone a three-and-a-half-hour facelift, knowing that she risked dangerous complications – or even death – under the surgeon’s knife.

Toni had spent years scrimping and saving from her meagre pension for the £10,000 operation, driven to fulfil a long-held dream. 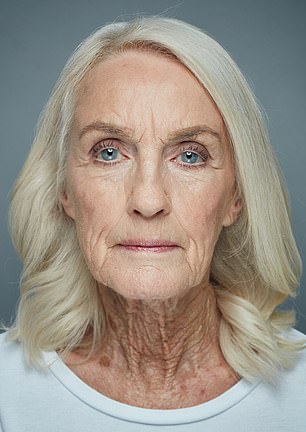 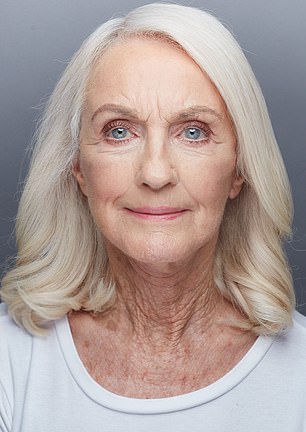 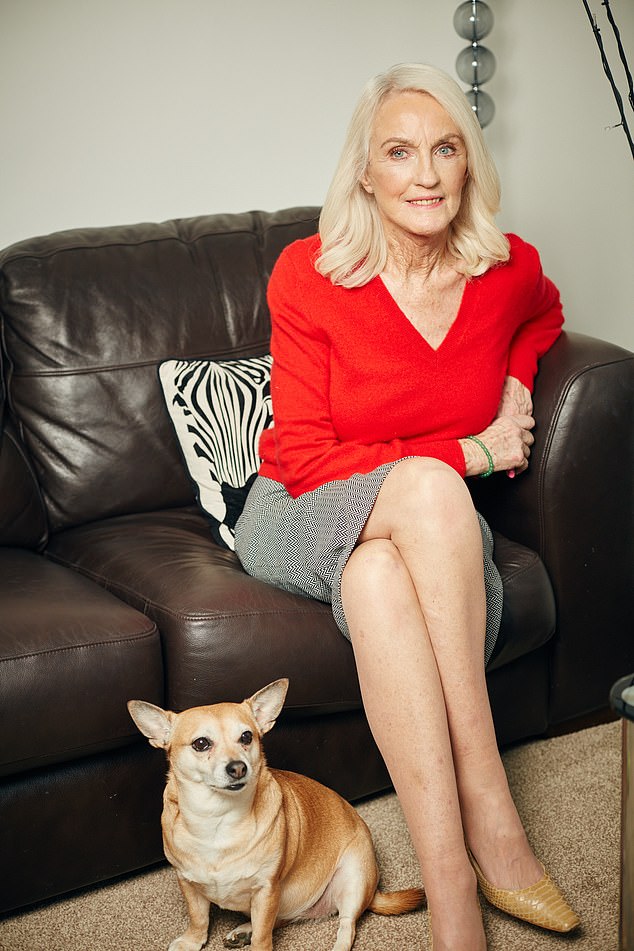 Toni had spent years scrimping and saving from her meagre pension for the £10,000 operation, driven to fulfil a long-held dream

And now, with her daughter at her side, she knew for certain that the loathed lines, wrinkles and crepe skin had finally been smoothed away. The biggest gamble of her life had paid off.

‘They told me there were risks, but I was determined,’ she explains today. ‘I said to the doctor, “If I die, I die.”

‘I didn’t like the way getting older made me look like a wizened hag. It didn’t match the way I felt inside.

‘Getting old is horrible. It creeps up on you so quickly. I have always felt young at heart, but for the past 40 years my face just didn’t match the body I’ve worked so hard to keep a size 10. And I’ve succeeded. But the face is something different.

‘The baggy crepe skin has gone. I used to avoid looking in the mirror, because it made me feel so awful. But since the operation, I’m happy and excited about the future. I think the surgery has taken ten years off me and each day I can feel my confidence growing. I’m a much better version of myself.’ 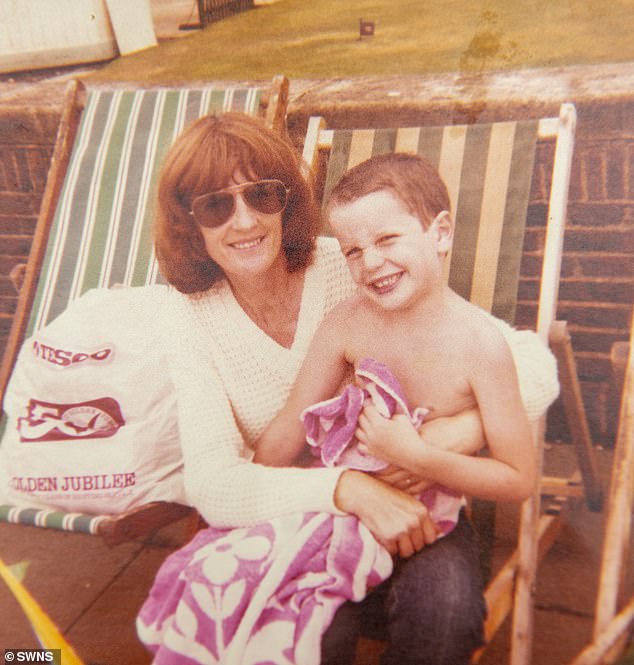 Toni Goldenberg in her 40s with her son Giles. She has been dreaming of cosmetic surgery for more than half a century 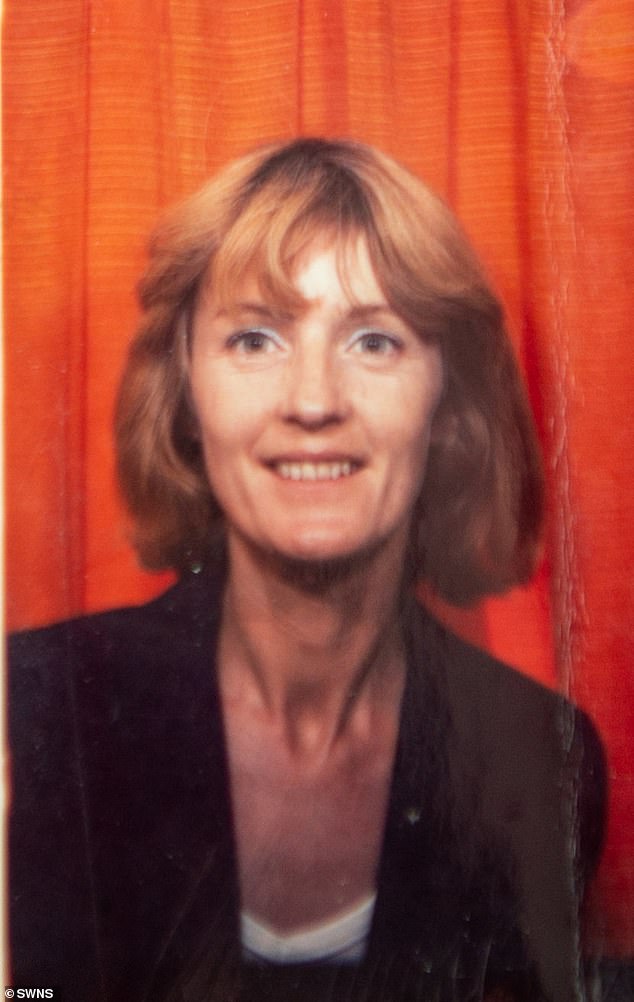 Millions of women will sympathise with Toni, especially those approaching middle age or beyond, but a facelift is a serious operation with many risks

It’s hard to believe this is the same woman I first met two weeks before her operation. Today, sitting in the tidy living room of her modest home in Wallington on the southern edge of London, I’m genuinely amazed at the transformation and tell her that, in fact, she looks 20 years younger.

Her face – now clearly much smoother – lights up in response. Compliments about her appearance, it seems, are a surprising experience.

‘Everyone says I look fantastic and I can’t get over how much better it’s already made me feel,’ Toni continues. ‘Friends have reacted really well and my family are stunned. One friend whom I’ve known for more than 50 years said that she’d do the same if she could afford it – and she’s 76.’

Millions of women will sympathise with Toni, especially those approaching middle age or beyond, but a facelift is a serious operation with many risks.

It involves making incisions behind the ears and up into the hair. Then the skin and underlying muscles are pulled up and back to tighten the jawline and the neck, while also lifting the eyes upwards.

There are potential complications including bleeding, blood clots and infection. And the risk of a general anaesthetic increases dramatically with age.

Cosmetic surgery and expensive West End clinics are a world away from Toni’s simple upbringing in rural southern Ireland. 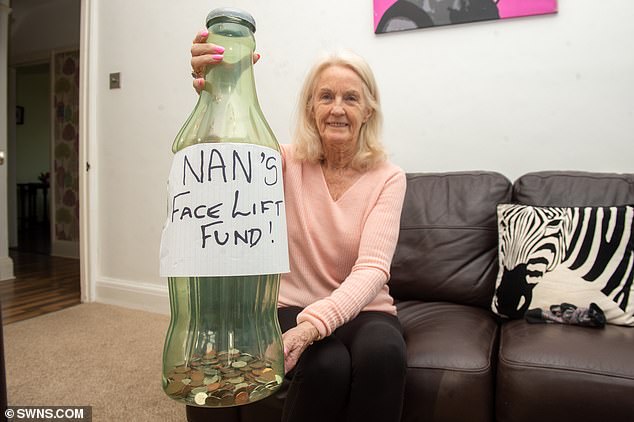 The great grandmother with a giant coca cola bottle in Wallington, Surrey, raising funds for her face lift 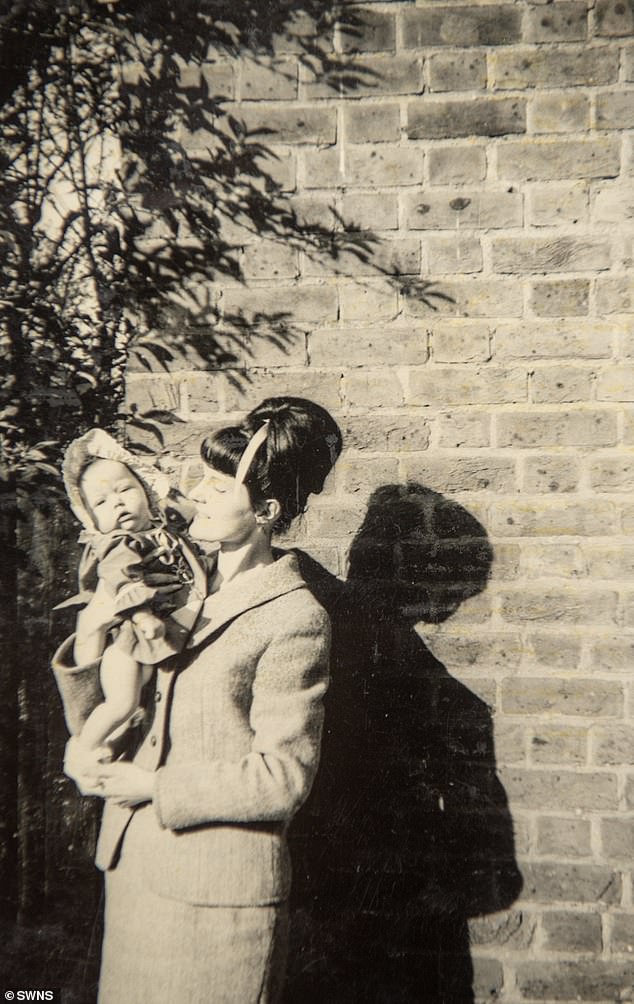 The grandmother, aged 27 in this image, is shown holding her three-month-old daughter Josie 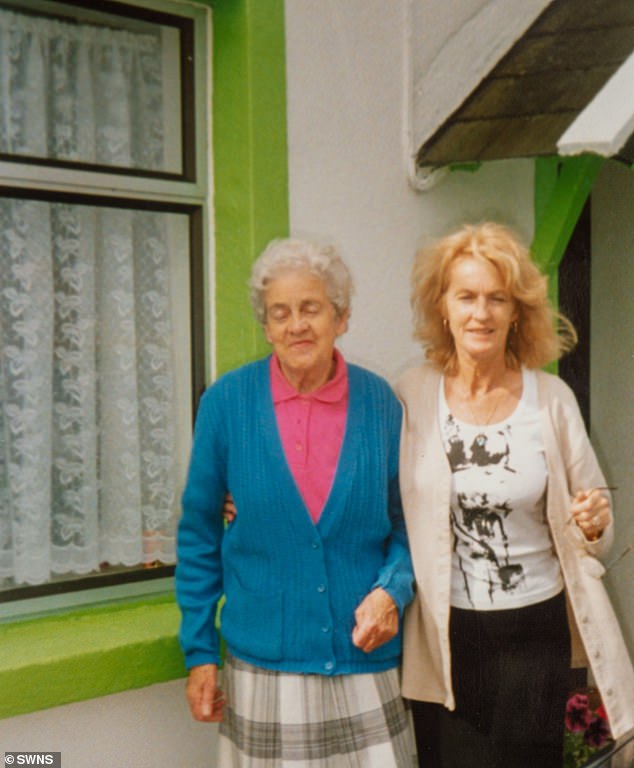 Toni Goldenberg in her 40s with her mother Ellen. She said her skin got worse every  year and she didn’t understand why, especially as her mother had good skin right into her 80s

She first started working at the age of 11, milking cows. Then at 14, she arrived in Wales to work as a nanny before going on to do silver service waitressing.

Marriage and children followed, but her husband left when she was in her 30s and she had the responsibility of bringing up daughter Josie, now 53, and son Giles, 42, by herself.

Toni had never been particularly concerned about her appearance until her mid-40s, when she began worrying that the skin on her face was getting more lined than girlfriends of a similar age.

‘It got worse every year and I didn’t understand why, because my mother had really good skin even into her 80s,’ she says. ‘I guess it’s just the luck of the draw, but it gradually ate away at my confidence.’

She works hard at her figure, maintaining a regime of regular yoga, long walks and visits to the gym. She even keeps a pair of dumbbells handy in her living room.

Indeed, Toni still shops in Zara and other high street stores normally associated with a younger generation and, when she looks in the mirror, she sees the same, slender size 10 figure she’s had since she was a teenager. Yet she was powerless to stop the lines and wrinkles spreading relentlessly across her face.

‘Then five years ago I decided it was time to do something for me and started the ‘‘Gran’s Facelift Fund”.’ 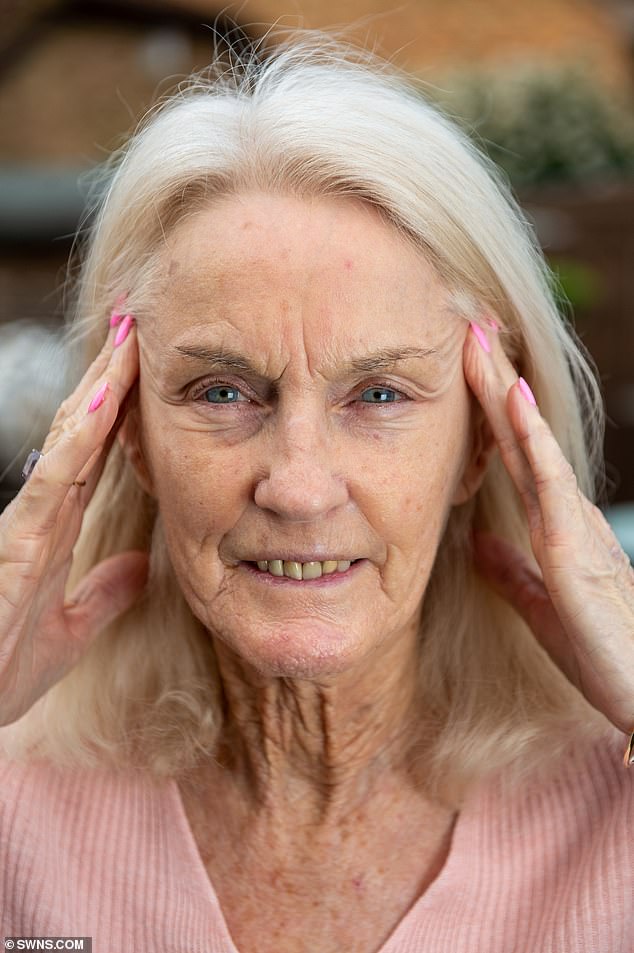 It was only when, strip by strip, the bandages were peeled away that Toni Goldenberg finally knew for sure

Family and friends helped by putting loose change into a giant Coca-Cola bottle she kept in her sitting room, but it would still take her five years to reach the £10,000 total, much of it saved from her £164-a-week state pension.

However drastic a decision it might have seemed, Toni’s children supported her.

‘Mum’s backed us with everything we wanted to do, so it was only right that we do the same for her,’ says Josie. ‘New technology and safer procedures mean that surgery is now accessible to everyone.

‘So why shouldn’t older people benefit if they can afford it?

‘Our only concern as a family was that it had to be done in this country by a reputable surgeon.’

After careful research, they chose The Harley Street Skin Clinic, where Josie and her daughter had already undergone chemical peels for acne.

Toni’s initial consultation was for two hours and the second about 90 minutes. The doctor, she says, was very straight and ‘didn’t beat about the bush’ when he warned that he could not perform miracles. Toni told him that she didn’t want a wind-tunnel effect, with her skin pulled back too tightly.

‘The doctor warned me there was a possibility that I could die, slip into a coma or become paralysed,’ she continues. ‘But I told him that at least I’d look good in my coffin.

Strong-willed as ever, she insisted he should finish the operation, even if she died!

‘Of course, I knew it was a risk, but that’s a one-in-a-million chance. And it’s not as if I have so many more years to live. What’s the point of life without taking some chances?’

The night before the operation, however, she admits to a churning feeling of apprehension.

‘I was scared but I was still determined to go through with it,’ she says. ‘I would never have changed my mind. I accepted that anything could happen during the operation. But I’m a great believer that you will go when your time is up and not before.’

She had written a will ‘just in case’ and made sure there was insurance to pay for a funeral.

In practice, there was little time to get nervous, however. ‘I was lying on the operating table, the anaesthetist said he was going to give me the drug and the next thing I knew I was awake and my head wrapped up like an accident victim,’ she recalls.

Toni was surprised to feel no pain when she awoke. ‘The surgeon said this would be the case and I didn’t believe him. I kept waiting for the pain to kick in but there’s been none,’ she confirms.

Once back home she had to sleep upright for at least four nights, with the aid of a special V-shaped pillow – and still does. 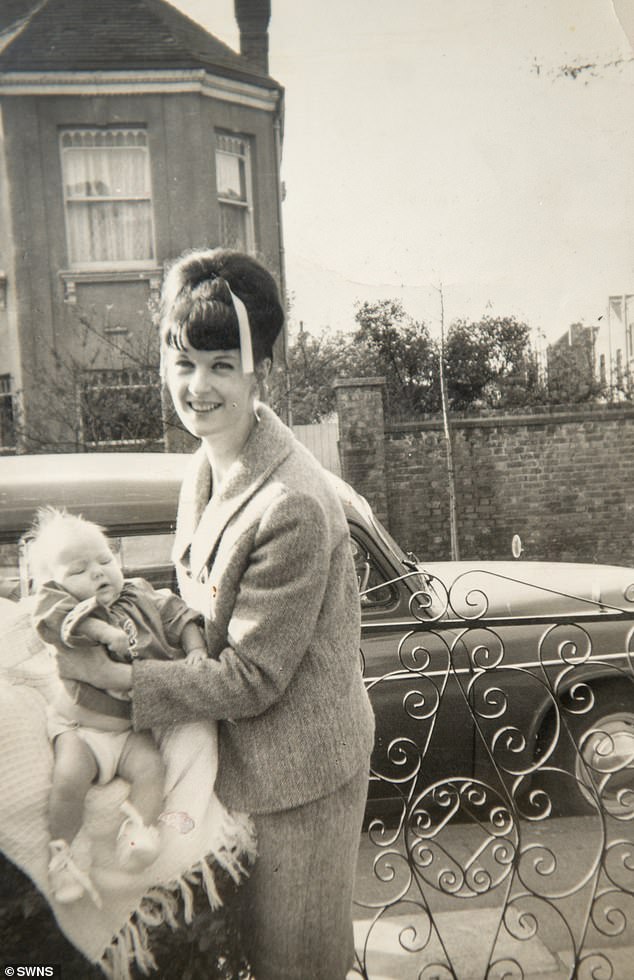 Toni Goldenberg, aged 27, at her house with her three month old daughter Josie

‘Apparently the longer you sleep upright, the better the result and I’m determined to do everything possible to get the best look that I can for my money,’ she explains.

The only real discomfort, she says, was the tightness of the bandages. Indeed, Toni was able to move about the house freely within 24 hours of her operation and she took her dog Tallulah for walks in the evenings, with a scarf wrapped over the bandages.

While still wearing the bandages, she celebrated her 80th birthday with a family party, eating cake and drinking champagne without any difficulties.

Yet she couldn’t be sure the gruelling operation had been a success until a week later, when the bandages around her face were removed by her surgeon, Mr Hagen Schumacher.

With her daughter and granddaughter by her side, Toni felt anxious butterflies as a mirror was held up.

But the result was all she had hoped for.

‘I could see the difference straight away,’ she beams. ‘Although my face was still swollen, I thought my skin looked lovely. The ugly jowls that made me appear constantly miserable had vanished. So had the deep lines around my mouth and some of the wrinkles on my turkey neck. I’m absolutely thrilled with the outcome. I feel that I look rested and fresh, instead of tired and cross. Some people might think I’m being vain, but the operation’s not about looking beautiful.

‘I had no illusions about that because I never thought that I was a beauty. I wasn’t trying to recapture my lost youth, either. I just wanted to feel better about myself.’

Mr Schumacher is surprised at how quickly her skin has improved, saying that it usually takes about four months to achieve such a strong level of recovery. ‘She is the oldest patient I’ve done a full facelift on and her progress has been remarkable,’ he says.

‘I was positively surprised after removing her bandages by how few bruises and how little swelling she had.’

And it will get even better as time goes by as it usually takes about a year to see the full effect.

He says: ‘Of course, it also helps that Toni was remarkably fit for her age and had no medical conditions.

‘Older people tend to have health issues that makes surgery so risky for them, but we did a full psychological and medical assessment before she was even considered for a face and necklift. She has truly been inspirational.’

There is still some numbness in her lower jaw, but Toni has been assured the feeling will return.

She accepts that such serious surgery is most definitely not for everyone but says it has given her a new lease of life, making her more willing to meet new people and try new things. She is certainly not prepared to slip quietly into her twilight years.

Would she have further work done? Her eyes, perhaps, or even breast implants?

She laughs. ‘I can understand why people become addicted to cosmetic procedures. My hands don’t match my face, for example. But, honestly, I’m done.’