It sometimes takes time for fan favorites on The Bachelorette to emerge. Think back to guys like Jason Tartick — the status of his hair prevented viewers from growing fond of him right away, but he became a fave by the end of the season. In the case of one Season 15 contestant, an early cast photo may have convinced fans to write him off, but his appearance in the season premiere has gotten them majorly interested. Who is Peter on The Bachelorette? The pilot flew right into my heart, and it looks like he’s cruising toward Hannah Brown’s, too.

Back in March, ABC released photos of 33 potential cast members for Hannah’s Bachelorette season. The pics were infamously unflattering, fueling some pretty harsh Facebook comments and tweets. Peter’s photo generated some of the kinder responses, with followers calling him a Chris Harrison lookalike and remarking that he seemed sweet. But compared to the feedback on other men, he wasn’t exactly stealing hearts. Given these opinions, it was almost as if Peter was the equivalent of the best friend in teen rom-coms who’s devoutly in love with the clueless main character.

If you skimmed through the men’s official photos once 30 contestants were confirmed, you noticed everyone’s glow-up, but Peter unexpectedly stole the show during May 13’s season premiere. First, he received an intro package, which is always a good sign that a contestant becomes a major part of the season. Peter discussed his family’s love of aviation, explaining that his dad was a pilot and his mom was a flight attendant. Following the more subtle arrival of pilot Chasen, Peter exited the limo in full pilot uniform, complete with hat and sunglasses. Um, take all of my roses, please. 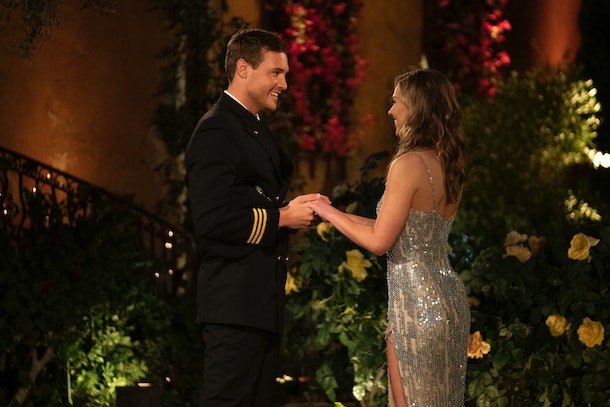 Peter gifted Hannah with a pair of wings to pin on herself, saying, "I’m just hopeful that at the end of this journey, you and I can fly away together." His smooth entrance won over Hannah, while the sight of him in uniform got the plain-clothed Chasen nervous. When in doubt, always goes for the uniform, gentlemen.

As the night continued, Peter shared his family history of aviation with Hannah, also earning praise from Demi and Katie in their surveillance van. Hannah opened up about always wanting to fly a plane, and the grin on her face had her friends convinced that Peter was a keeper. Does this mean Bachelor Nation can expect a helicopter ride this season?

Peter, 27, is from Westlake Village, California, and his ABC bio reads:

The bio also reveals that he once took a girl on a sunset flight to Santa Barbara for dinner and that he still lives at home. I don’t know much about a pilot’s typical schedule, but if you spend more time in the skies than you do on the ground, I don’t blame him for staying at home. However, as evident by the Bachelorette premiere, Peter’s certainly capable of smooth flying on his own.

Here’s hoping that the pilot flies toward fans’ high hopes for his success. Season 15 of The Bachelorette continues at 8 p.m. ET on Monday, May 20, on ABC.