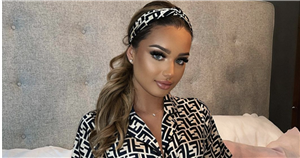 Love Island has left fans on the edge of their seats yet again, as they tease two newbies in the upcoming episode.

The stunning pair are seen walking into the villa in bikinis before the trailer for the next show cut out.

So, who is Lucinda Strafford and what's her plan for the Love Island villa? Let's take a look…

Who is Love Island's Lucinda Strafford?

Stunning Lucinda is 21 and she hails from Brighton.

Lucinda is the owner of an online fashion boutique, and she's racked up an impressive following on Instagram.

She has 43,000 followers on Instagram and she often posts stylish photos of herself modelling various outfits from her company The Luxe Range.

Lucinda's family own a car company named Strafford Self Drive, and the Love Island newbie took to Instagram to show off her dad's many impressive cars. The 21 year old's Instagram feed hints that she lives a very luxurious lifestyle, and she's often posting snaps from abroad.

The soon to be reality star also shares photos inside her chic home, which boasts lavish interiors throughout.

Discussing why she's signed up for Love Island, she penned: "I’m a relationship kind of girl. The timing is right and I want to have some fun."

Lucinda continued to say she "really fancies Brad," while adding: "Possibly Liam. But obviously I’m open to getting to know any of the other boys."

Discussing what she thinks of the other girls, Lucinda said: "Liberty’s a similar age to me, so I think I’ll probably get along with her, she seems funny. I like Kaz, she seems really bubbly. I can tell Faye can stand up for herself, but I also quite like that about her. So I don’t feel like we’ll rub against each other.

Lucinda's entrance comes after Chuggs was dumped from the hit show, after new bombshell Rachel Finni coupled up with Brad McLelland.

The 29 year old beauty chose Brad in a tense re-coupling which meant Chuggs was sent home.

Speaking about her looming decision, Rachel said: “This has not been easy in the slightest. I think you’re both amazing guys in every single way. I can’t fault either of you for absolutely anything.”

"I would like to couple up with this boy because I feel we have a very similar take on life we can talk about anything he had made me feel comfortable, sexy, he has made me feel f**ing great I am excited to see where things go."