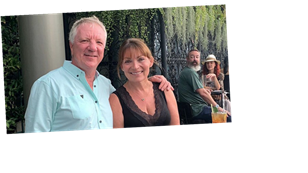 Lorraine Kelly, OBE, is a known face on television, having presented her daytime TV show, Lorraine, for 10 years and worked in broadcast journalism for just over 35.

The star has amassed quite the fortune as a result and owns two properties, a stylish London flat and a stunning Buckinghamshire home.

Lorraine, 61, began her successful career at a young age, and got her first gig in front of a camera whilst in her early 20s.

The mum-of-one, born in Glasgow, began working at a newspaper and later went on to become an on-screen reporter, making her TV debut in 1984.

Lorraine worked as a Scotland Correspondent for TV-am, and then landed the presenter role on Good Morning Britain alongside Mike Morris some six years later.

As well as this, she’s fronted a number of shows including Top of the Morning, Lorraine Live and Nine O’Clock Live. Lorraine is also mum to 25 year old daughter Rosie Kelly Smith, who she often shares snaps of, but who is the star married to?

Who is Lorraine Kelly’s husband?

Lorraine has been married to TV cameraman Steve Smith since 1992 and as well as sharing their daughter together, they are also parents to an adorable Border terrier named Angus.

Despite Lorraine, who was recently forced to apologise after Graham Bell swore on air, being a household name, we don’t see much of Steve who tends to stay out of the spotlight.

Last year, Lorraine shared a rare glimpse of husband Steve as they celebrated their 28th wedding anniversary together.

The sweet pair held up desserts with ‘Happy Anniversary’ written on them in chocolate.

Lorraine also shared an adorable throwback snap of their wedding day and she wrote alongside it: “So this happened 28 years ago! Happy anniversary to my husband Steve who makes me laugh and is always in my corner. #anniversary #love #happy.”

Their relationship mostly stays out of the public eye, but their daughter Rosie sometimes gives us a look inside Lorraine and Steve’s marriage.

Wishing them a happy anniversary last year, Rosie shared a throwback snap of Lorraine and Steve standing in a sunny location and she penned: “My faves, Happy Anniversary.”

Lorraine admitted she’d taken her wedding ring off amid the pandemic and said in response to a comment about having chapped hands: “Aye I hear you. Anyone else had to take off their wedding ring due to sore hands??

“Obviously we need to keep thoroughly washing them as often as possible and I'm actually using up that Xmas pressie hand cream I got given." Lorraine spoke to Express.co.uk in 2019 to reveal the secret behind how she’s made hers and Steve’s marriage survive the test of time.

"I think we make time to talk. We like each other, and he makes me laugh. We give each other space,” she said.

Adding: “We have our own interests as well as enjoying doing things together. That keeps us interested and interesting. We respect each other."