It’s 2am. I’m dozing when I hear a car engine fire up, followed by a terrible crunch and a tinkling of glass – then deathly silence. I instantly know what’s happened and feel a surge of rage. That evening, we’d had friends around for our annual end-of-year get-together. We hold it in our big front garden so neighbours can drop in, too. I’d gone to bed after the last guests had drifted home and left my partner outside drinking with a friend.

Several beers later, just as I was drifting off, he decided to clear up. The crunching sound was him moving the car to get access to the bins, and accidentally reversing his BMW, his brand-new pride and joy, into a post. I shouldn’t be so surprised. My partner likes to party. He’s the life and soul of every gathering, which I love, and always the last person standing, which I hate. Often, it’s me who has to drag him home when he’s outstayed his welcome. 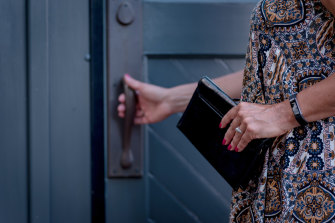 ‘When it comes to joint invitations, we agree to come home separately.’Credit:iStock

He always seems to out-drink his welcome, too. It’s not that he’s got an alcohol problem; we actually don’t go out very often as our two daughters are still young, and he doesn’t drink to excess when it’s just us at home. It’s more that he misreads social situations and gets carried away. This was fine when we first got together, but since having kids and acquiring responsibilities it’s become a real issue.

More than once he’s had too much to drink in front of my parents. We’ll be invited around to their place for a meal and, although he doesn’t roll around drunk, he’ll get tipsy enough to start slurring. Now, I like to let my hair down and have a good time as much as anyone, but on the right occasion. When it’s just a low-key dinner with family, it’s embarrassing and plain rude. It’s the same thing with school events: not the place or the time for that kind of behaviour.

Whenever I bring it up he gets angry and it blows up into an argument. We’ve had quite a few of late, which has only made me even more aware of how much he drinks. (Some nights I’ve caught myself counting.)

I know it sounds miserable, and I feel miserable just admitting it, but I also know that I’m not alone. I have close friends who feel the same about their partners.

One of them, who has a young child who gets up with the lark, grew so tired of wrangling over departure times with her husband, then having to haul him away, that one night she snapped. They were having dinner with a couple they’d known for years and, after trying to hint that they should make a move to go home, she lost her patience and left him to it.

He ended up drinking into the small hours with the husband and staying the night. Funnily enough, they haven’t been asked back.

Over the years, I’ve met loads of couples who also struggle with this. Some are so mismatched they’ve stopped going out together. Recently, my partner and I have fallen into this pattern, too. There was no big heart-to-heart discussion, it was just an unspoken agreement.

And it’s really taken the pressure off. When it comes to joint invitations, we often agree to come home separately. Our relationship is a lot happier because of it.

We enjoy each other’s company more, the arguments have stopped. And so, too, have the garden booze-ups … although, after pranging his prize BMW, that was actually his suggestion.

This article appears in Sunday Life magazine within the Sun-Herald and the Sunday Age on sale December 8.