The moment the 2020 presidential election results were finally projected on Saturday, at least two of the candidates were in the midst of getting some exercise.

President Trump was golfing at his Virginia country club when the news came in that his opponent Joe Biden was declared the 46th president of the United States.

Trump stayed on the course for hours, stopping to congratulate a bride as he left the course in Sterling, Va.

Meanwhile, Biden's running mate and now-vice-president-elect Kamala Harris was out for a jog with her husband, Doug Emhoff, near the Biden campaign headquarters in Wilmington, Del., Fox News' Peter Doocy reported on air. 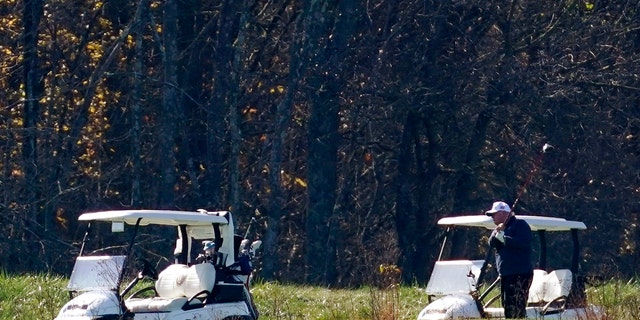 As soon as the news broke, Harris called president-elect Biden to congratulate him.

She posted a video of the call on Twitter.

"We did it. We did it, Joe," Harris said, laughing. "You're going to be the next president of the United States."

In the video, the first female vice president is wearing jogging clothes and holding a pair of earbud headphones.

Emhoff also posted about Biden's and Harris’ win on Twitter, showing a picture of himself and his wife hugging.

“So proud of you,” Emhoff wrote.