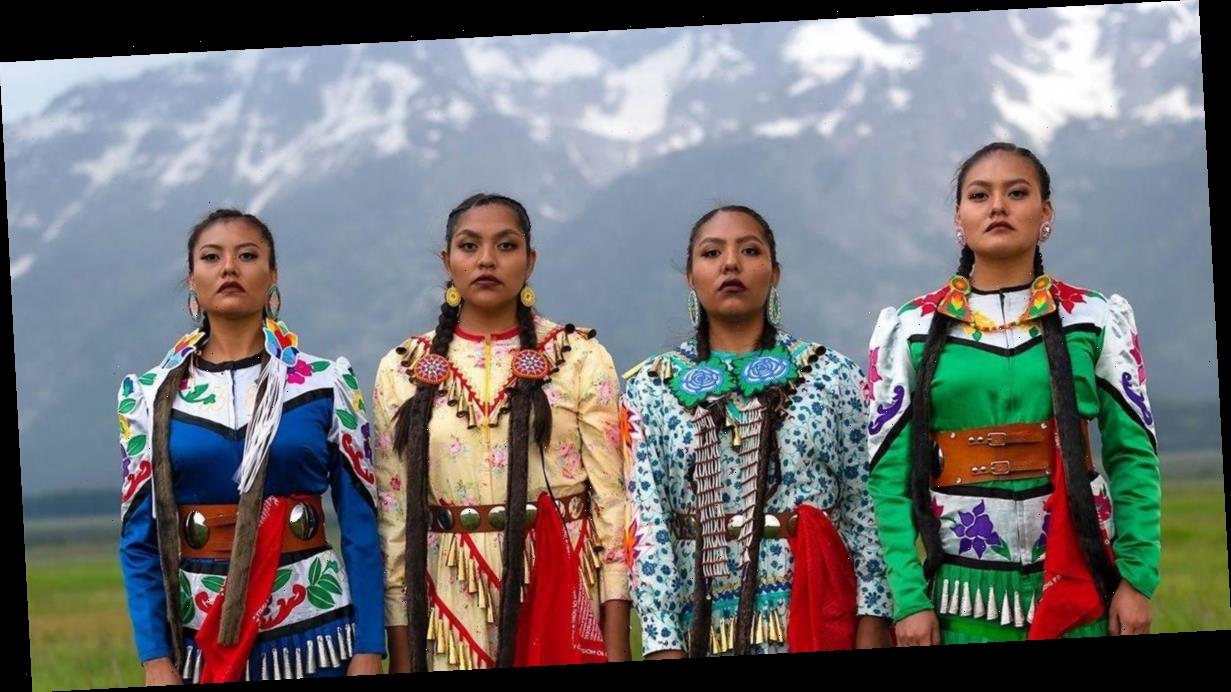 TikTok, the mobile application that quickly became a defining cultural aspect of 2020, is most known as a platform where dances and comedy videos go viral. But Native and Indigenous individuals are also using the app to challenge stereotypes about their cultures, and let the world know they are “not just relics of the past.”

Over the past few months, the hashtag #NativeTikTok has racked up more than 1.3 billion views. One popular creator is James Jones, a performer, artist and cultural educator from Alberta, Canada, who identifies as Cree. Jones, who is known as @notoriouscree to his 2.4 million TikTok followers, told CBS News his goal is to use the platform to show the world that Native and Indigenous individuals are “still here.”

“I think a lot of people, especially here in North America, are just being reminded that Indigenous people are still here, and we’re not just relics of the past,” Jones told CBS News. “That’s one of the really good things I like about TikTok is that you get to see a lot of Indigenous creators, artists … just in their everyday life. You get to see them doing everyday things.”

He said his account is dedicated to putting a “cultural spin” on trending content. In his first viral video, Jones dressed in traditional regalia and showcased hoop dancing to the song “Blinding Lights” by The Weeknd. The video, posted on April 1, has been viewed more than 2.4 million times, and Jones said he gained roughly 100,000 followers from that post alone.

In several videos, Jones explains the hoop dance is done to tell stories and “for those in need of healing.”

“We tell stories with our hoops using the teachings of Mother Earth,” the text reads on one video. “We’re all in this togeather (sic), and we’re only going to move forward by supporting and helping each other.”

23-year-old Erin Tapahe, known as @Tapahe on TikTok, said she uses her platform to show the similarities and contrast between her life as a Navajo woman from Arizona and the lives of non-Native or non-Indigenous TikTok users.

Along with teaching people phrases, counting and colors in the Navajo language, Tapahe said she’s using the platform to spread love amid the pandemic. COVID-19 has killed more than 431,000 people in the U.S., according to Johns Hopkins, and the virus is disproportionately impacting Native communities. Tapahe said some members of her family have died from the virus.

In hopes of helping others spiritually and emotionally heal from the stresses of the year, Tapahe has created videos about the Jingle dress and Jingle dance. The dress, which has metal cones woven into the fabric to make a rain-like noise when worn for the Jingle dance, is said to have healing powers.

As the story goes, during the Spanish influenza in the early 1900s, a medicine man from the Ojibewea tribe had a granddaughter who fell ill. He had dreams of four women wearing and performing in the Jingle dresses and he felt a message from spirits that if he were to create the dress for her granddaughter, she would heal. It worked, and his granddaughter was soon healthy and able to dance.

Tapahe said she hopes the story of the dress will help others get through a time of heightened stress.

“[I wanted] to promote a voice of healing,” Tapahe said. “This is just 10 seconds, just a slight glimpse of something happy, something positive, because so many of us are going through very unique challenges that we would have never been able to have planned ahead of time.”

While Native and Indigenous creators are sharing many aspects of their culture on TikTok, not all cultural traditions can be shared on social media, multiple creators told CBS News.

“I want to tell our stories from an Indigenous perspective, and I want to show the beauty of our culture,” Jones said. “But I don’t want to share too much where I’m giving away parts of my culture that shouldn’t be put on TikTok or social media. … I try not to share anything [traditions] that’s too spiritual or too sacred.”

Jones didn’t specify the traditions he was referring to, but said that refraining from posting some elements of his culture is done out of respect for elders who ask that certain things not be put on social media.

“There is some things that shouldn’t be put on the camera,” Jones said. “Not everything needs to be for TikTok.”

Many Native and Indigenous communities preserve their culture through storytelling, and the stories are often told by elders, who are leaders in the community.

In Tapahe’s community, for example, traditional dances are often taught in-person by elders. The learning is considered a sacred experience, as the person seeking to learn is expected to approach learning with “an open heart and open soul.”

“But something like counting to 10, or the colors, or the significance of the jingle dress is different than sharing more personal things,” she said, adding that #NativeTikTok is “just the tip of the iceberg” when it comes to what Native and Indigenous cultures entail.

Despite the content just being “the tip of the iceberg,” thousands of Native and Indigenous TikTok users have commented on #NativeTikTok videos to share how they’ve helped them feel more connected to and proud of their cultures.

For 17-year-old Theland Kicknosway, who is Cree and Pottawatomie and based in Ottawa, Canada, TikTok is a way to help foster a sense of pride in Native identity.

Much of the content Kicknosway, otherwise known as @the_land, produces focuses on the tradition of dancing, regalia and hair braiding, which he says is a “symbol of strength and wisdom” and a reflection of Indigenous identity.

Kicknosway told viewers he is proud of his identity and ancestry, despite having been teased and bullied about his long hair. He encouraged others, particularly boys and men, to be proud as well.

“To Indigenous people, our hair is everything… Whenever we braid our hair, we think good thoughts, and we give thanks to our body, mind and spirit. That’s what the three strands are for,” Kicknosway says in one video. “…Not even a generation ago, my family was forced to cut their hair in residential schools. … I wear these braids to show people that I’m proud of who I am.”

While many Native and Indigenous men speak about the empowerment of wearing their hair in braids, many Native women on TikTok have shared videos set to songs that incorporate a spoken word version of the poem “Brown Eyes” by Nadia McGhee, which celebrates their eyes.

“Her eyes are blue. Yours are brown. Hers represent the ocean. Yours represent the ground,” the poem says. “You’ve always hated your eyes and wished that they were blue. But your eyes have a tint of gold so rare it must not be true.”

Tapahe told CBS News it’s both empowering and inspiring to see other Native and Indigenous people being proud of who they are. When she was in middle and high school, she said she had a hard time finding her identity and badly wanted to “fit in” and “be accepted.”

At one time, she decided to look up “Native American” in a search engine. The outcome, she said, was “baffling,” as the top results were links about polygamy, crimes and drugs.

As she and other TikTok creators explained to CBS News, “Native” and “Indigenous” are not terms for a monolithic people, and they are more than the stereotypes that have long defined them.

There are 574 federally-recognized Native and Indigenous groups in the U.S. alone, according to the National Congress for American Indians. In Canada, there are more than 630 First Nation communities, according to the Canadian government.

“There’s a big misconception of Native people, and I think a lot of times, [what] someone has learned about Native people is from high school history books,” Tapahe said. “[TikTok’s] changed the narrative of how people see us.”

As the project Reclaiming Native Truth reports, the lack of knowledge and understanding about the millions of people who identify as Native or Indigenous stems from “faulty history lessons, media reports and rumors.”

“Non-Natives often hold positive and negative stereotypes together: Native peoples living in poverty and rich from casinos; resilient and addicted to drugs and alcohol; the noble warrior and savage warrior,” reads a 2018 report by Reclaiming Native Truth. “These assumptions and contradictions are alive and well thanks to sports teams and consumer products that continue to use derogatory Native American–themed mascots, which some people defend as ‘honoring’ Native Americans (they don’t). Schools teach biased and revisionist history, while news media report only on disparities and do not use Native reporters to tell stories of strength. The list goes on and on.”

22-year-old Haatepah Clearbear, otherwise known as @desertndn, told CBS News that the positive representation he sees on TikTok would have given him a greater sense of pride in his heritage had he been exposed to it growing up.

Clearbear and his twin brother were adopted by their non-Indigenous fathers when they were just one year old, and grew up in a California town where, Clearbear says, there wasn’t a lot of Native or Indigenous representation. It wasn’t until they were 18 they discovered they are Kumiai and Chichimeca-Guamare, groups that are Indigenous to Mexico.

“When I was young, I was ashamed of who I was. I didn’t like what I saw … Being raised with people who don’t look like you, it’s like you kind of think of yourself as an alien,” he said. “… But then somewhere along the way, you learn to embrace those differences, and you start to reclaim who you are.”

Now, Clearbear is an established model who has been featured in Vogue, Nike and other elite brands. With more than half a million followers on TikTok, and thousands more on Instagram, Clearbear is also using his platform to raise awareness about his culture and modern Native and Indigenous issues — neither of which are adequately taught in the U.S, activists say.

“We’re not doing the generic dancing around the fire, holding scalps in our hands. We’re not the stereotype,” Clearbear said. “We’re peaceful people.”

“This whole kind of movement of Native Tiktok, what’s interesting is that it says, Native and Indigenous people, we’re not afraid to take up space,” Kicknosway told CBS News. “… That is so amazing to see. Just having our voices heard, and, you know, sharing our messages, sharing stuff about our braids, or seeing the different things regarding many different issues and epidemics, like [the] missing and murdered … it’s so crazy to think that all you need is an internet supply, to post videos, and this source can go to millions of people all across the world.”