The day the end of World War II was declared, hundreds of thousands of ecstatic people crammed into Melbourne CBD.

Of the mass party on August 15, 1945, a report in The Age said there had been ‘‘nothing like it in sheer exultation’’ seen before in this city.

They sang It’s a Long Way To Tipperary, over and over again.

But the article also noted the presence of sorrow, anxiety and grief on the day dubbed VP Day, for Victory in the Pacific.

It said that if you could read every face in the crowd, they would tell "stories of six years of war".

Jean Smith was one of those faces, and 75 years later, she recalls being both happy the war was over, and deeply sad.

Her husband, Les Wilkin, had been shot dead, age 21, by German soldiers in the Middle East in 1941, just five months after he married Jean at Melbourne’s Collins Street Baptist church. 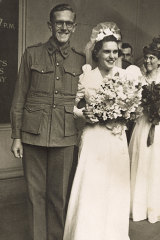 It’s her 100th birthday on Saturday, and Jean remembers Les fondly. "I was in love with young Les when I was a kid. We had a lot of fun together, happy times. I’m very proud of having known young Les Clifton Wilkin."

Another cause to be sombre on VP Day, 1945, was that Jean and her sister, Betty, were in town to ask their minister at Collins Street Baptist to help find Betty’s missing husband, Murray Hudson.

Sergeant Hudson had been a prisoner of the Japanese, first at Changi Prison in Singapore and then on the infamous Burma railway. But happily, he did come home.

Mrs Smith herself is a World War II veteran. After Les died, she joined the Australian Women’s Army Service (AWAS), and served in the top-secret chemical warfare unit.

Based in Queensland, she took shorthand notes of experiments of the effects of mustard gas and other chemicals.

In 1949, back in Melbourne, she married war veteran Bert Smith. While they had two healthy daughters, they suffered three miscarriages and a stillbirth, and Mrs Smith later also lost part of a thumb to melanoma.

She wondered whether the chemical exposures played a part but doesn’t regret her service. It was her contribution to the war effort. "It was very important and very interesting," she said. "I’m very proud to have been a member of that service."

Mrs Smith, is still an RSL member. Her father, Fred Cawood, served in World War I, saw his friend shot dead and suffered nightmares for the rest of his life.

Mrs Smith says it’s important we mark the 75th anniversary of VP Day on Saturday, to remind us of war's impact. "Let’s hope to God it never happens again," she said.

On Mrs Smith’s 100th birthday, on Saturday, only one of her daughters, Jenny Freestone, is allowed in at her aged care home, Abbey Gardens, in Warragul.

Her other daughter, Joanne, was unable to come under current COVID-19 restrictions.

Earlier this month, however, Mrs Smith went to Jenny’s nearby house to meet her first great-grandson Guim. ‘‘It was wonderful. It was very exciting,’’ Mrs Smith said. ‘‘I was very happy to see this beautiful baby. Isn’t he beautiful?’’

And the National Trust and Open House Melbourne will launch the website WWII at Home profiling 18 of Victoria’s significant WWII sites and veterans’ stories.