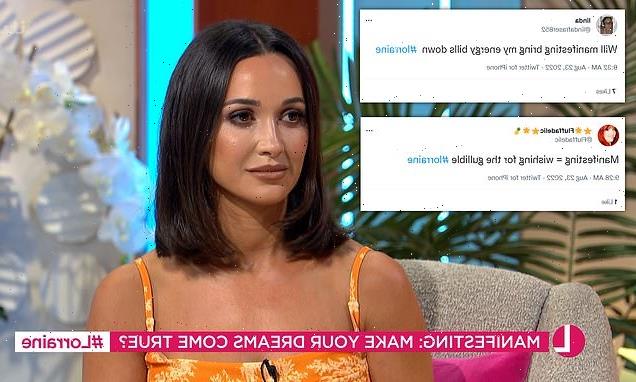 ‘Can it reduce my energy bill?’ Lorraine viewers mock life coach who claims ‘manifesting’ positive outcomes can help people through difficult times – branding it a ‘load of b******s’

Viewers of Lorraine have blasted the concept of manifesting as ‘b******s’ after a life coach and ‘queen of manifesting’ said it changed her life.

Roxie Nafousie, author of the bestselling book ‘Manifesting: 7 Steps to Living Your Best Life’, appeared on the ITV show to talk to Christine Lampard about the process.

Her book sets out seven tips on how you can ‘use the power of your mind to change and create the reality you experience’.

She told Christine: ‘For me this is a self-development practice.’

Roxie explained that when we use phrases such as ‘I can’t’, the subconscious mind makes that belief a reality.

Instead, she suggested changing the mindset to saying ‘I know I can do it’, which can make your subconscious ‘align’ with that belief.

One of Roxie’s seven steps is a ‘vision board’ which is writing down ‘everything you would like to attract into your life’. 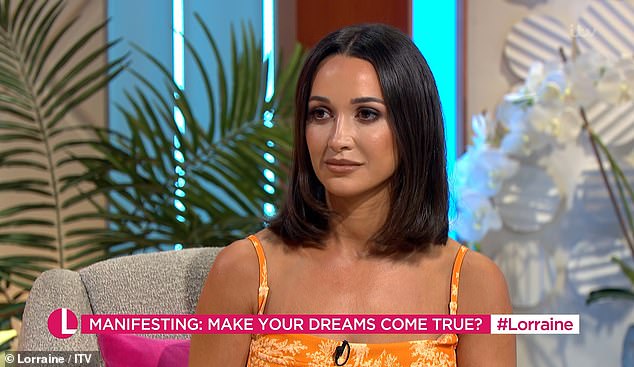 Roxie Nafousie, a life coach who wrote Manifesting: 7 Steps to Living Your Best Life, insists that pthe process of manifesting has changed her life

She said: ‘Manifesting asks you not to be realistic. It asks you to dream as big as possible.’

While she added ‘it’s not going to happen overnight’ Roxie said it is possible to make positive things happen for yourself if you practice manifesting.

However, viewers were not convinced by the practice, despite the fact stars like Lady Gaga and Oprah Winfrey swear by it.

One person on Twitter sarcastically commented: ‘Will manifesting bring my energy bills down.’

Another dismissed the practice of manifesting as ‘absolute b*******’.

They said: ‘Manifesting is just a trendy buzzword for success. Belief alone won’t get you where you want.’

One more person said: ‘I have watched some s*** on this show over the years but this ‘manifesting’ segment really takes the biscuit!’

Addressing people who are struggling with the cost of living crisis, Roxie said she believed ‘from the bottom of [her] heart’ that manifesting can help anyone, regardless of their situation.

Referring to her own struggles, Roxie said she had ‘never really known what it was like to be happy’ and was having a difficult time during her twenties.

After listening to a podcast about manifesting and practicing the process, Roxie said she received a message on a dating app from the man called Wade – who became the father of her son, Wolf.

Despite insisting the process had changed her life, viewers remained unconvinced by Roxie’s tips.

After one person suggested she would not get a job which ‘required a PhD in astrophysics’ simply by manifesting, another responded: ‘Well obviously! You need to make a giant vision board first’.