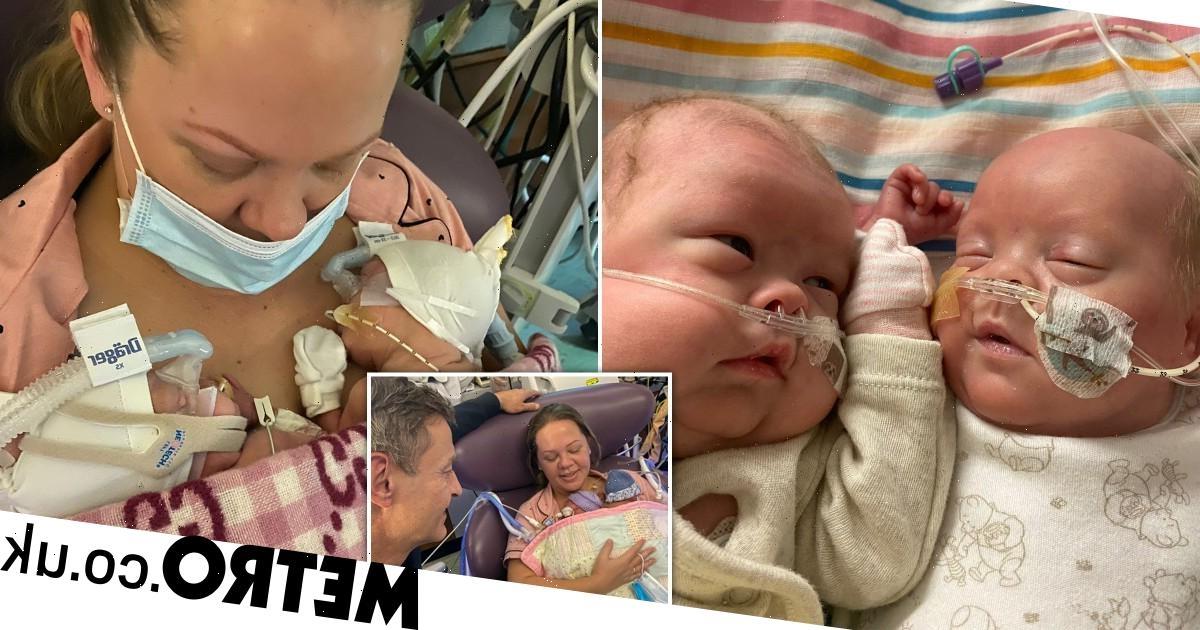 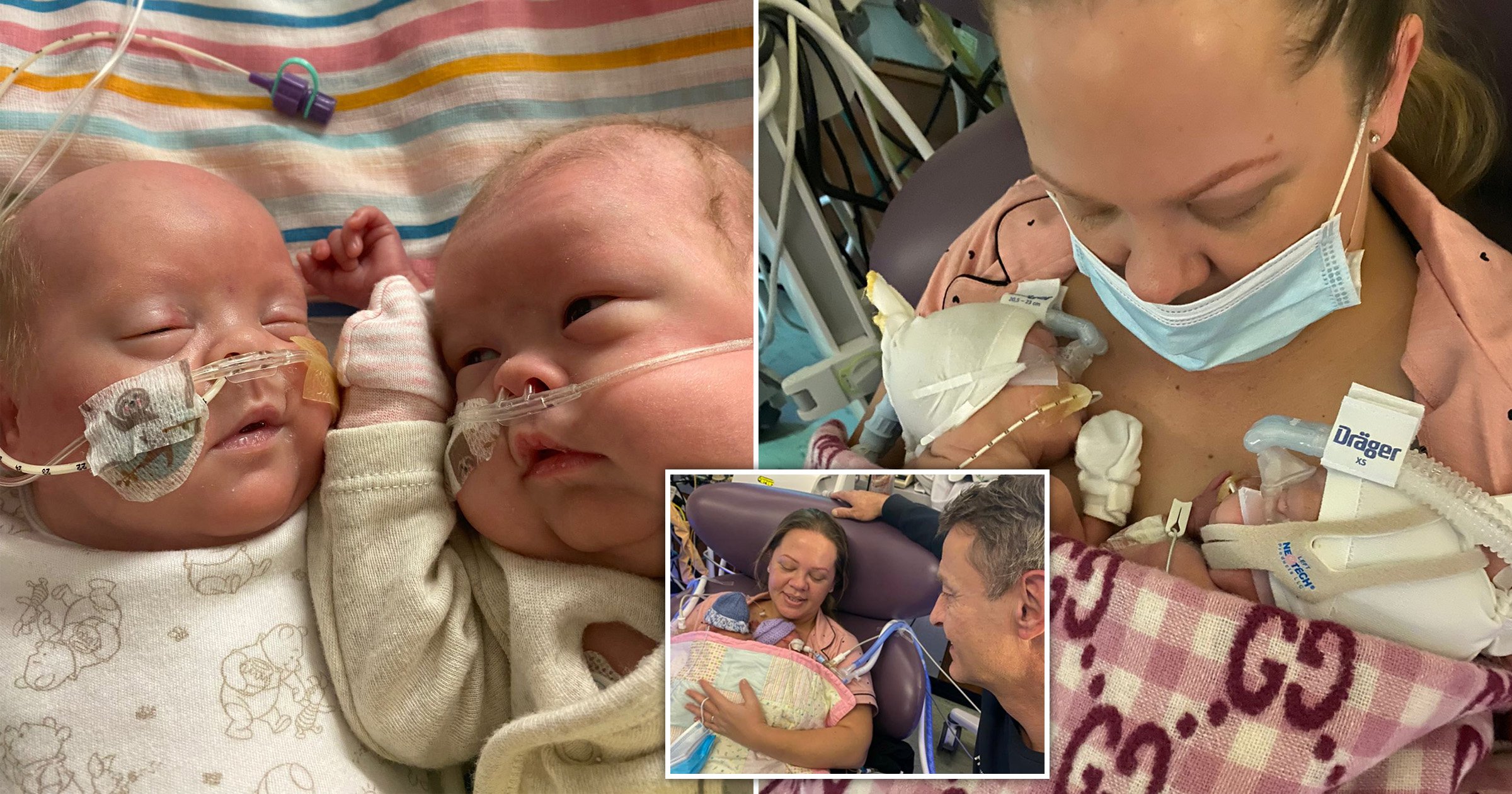 Little Harley and Harry Crane were given a 0% chance of survival when they were born at just 22 weeks and five days.

The miracle babies have gone on to beat the odds and, after spending five months in the newborn intensive care unit, at Queens Medical Hospital in Nottingham, they’re both home at last.

Mum Jade Crane, who lives in Derby with her husband Steve, said: ‘I’m so proud of my babies – they’re little fighters.

‘They’re doing absolutely amazing. They’re doing all the things that we were told they wouldn’t do – they’re crying, they’re surviving.

‘The doctors were saying the babies wouldn’t survive at this gestation. I was still two weeks away from what the UK classes as viable and the babies were given a 0% chance of survival.

‘It was only because I was at a teaching hospital and that the babies were born with signs of life that they chose to intervene medically.

‘We’ve waited 140 days for this. It’s really emotional. Sad to leave the team but happy to be going home.’

Steve, 52, added: ‘It’s been such a long time and although it’s been a really, really treacherous journey, 140 days ago we didn’t think we’d be here.

‘It’s just so affirmative to see them together and to be walking out that door.

‘The absolutely stunning doctors, nurses and surgeons have all been part of the making of this moment. It’s hard to say goodbye to them, but I hope I never see them again.’

The couple’s journey to parenthood was difficult before the twins arrived, with Jade, 39, suffering an ectopic pregnancy before they decided to start IVF in 2010.

After three heartbreaking miscarriages on IVF, Jade learned that she had an overactive immune system which meant her body would reject the pregnancies.

The couple moved from a fertility clinic in Nottingham to one on Harley Street in London – believed to be one of the best in the world. There, she was prescribed different types of medication in a bid to combat her immune system problems.

‘Steve and I have been together for 14 years,’ said Jade, ‘and 11 of those have been spent doing IVF.

‘On our eighth cycle of IVF, we had two embryos transferred which both worked, and we ended up with boy and girl twins.

‘I couldn’t let myself believe it, I was so fearful of a miscarriage or something going wrong. I literally didn’t do anything during the pregnancy as a result.

‘I was still in disbelief when we got to 20 weeks, and I hadn’t even hit my third trimester when I went into labour, so we hadn’t bought anything.

‘We had painted the nursery and revamped furniture, but we hadn’t bought cots or thrown baby showers or anything.

‘The few bits of clothes that I did buy made me think that I better keep the tags on just in case – you just don’t want to let yourself believe.’

The former mental health nurse and addiction counsellor took herself to get checked at Queens Medical Hospital in Nottingham on October 26 after leaking fluid at home for several days when she was 22 weeks along.

An internal examination revealed that Jade was experiencing a premature rupture the fetal membranes, and she was devastated to be told that she would lose her twins.

She said: ‘The doctor was so shocked – she told me she could see the membrane bulging, so the sac of water was basically showing.

‘It was so scary. I knew I was 22 weeks, but I didn’t know about the viability thing. They told me they were going to admit me but that I was probably having a miscarriage.

‘The doctor kept saying it was a miscarriage, but I said it couldn’t be because I could feel the babies moving.

‘I knew they were OK but was being told they wouldn’t survive at this gestation.’

Women can legally terminate a pregnancy up to 24 weeks, and doctors are not required to medically intervene with babies born prior to this time, so the twins being born at 22 weeks didn’t stand them in good stead for survival.

Jade had decided to go to Queens Medical Hospital in Nottingham for her scans due since that facility had a more extensive NICU than her local hospital in Derby, and she wanted closer monitoring owing to her fertility history.

Fortunately, it’s also a teaching hospital and doctors intervene with babies born 23 weeks and later in an effort to learn more about premature births.

Jade said: ‘I was 30 hours away from what they would class as viable and my babies were given a 0% chance of survival.

‘Labour happened really quickly. I was denied pain medication and monitoring during labour as I wasn’t viable, which was awful, really.

‘It was only because the babies were born with signs of life that they chose to intervene medically. They were alive, moving around, and they cried. Their little cries sounded like a tiny kitten.

‘I remember saying that I couldn’t hear Harley cry and one of the nurses said I wouldn’t because she was far too early, but then I heard this little cry.

‘Harry did the same when he was born an hour later, still in his sac. In Japan, it is seen as being lucky if you have a baby born in their sac, so I held onto that luck.’

‘I remember getting wheeled round to NICU and the first thing I asked was if they were still here because I didn’t know if they would be, but they were and still are – 79 days in now,’ said Jade.

The twins have had many surgeries in their short lives to combat the health problems they’ve faced as a result of their premature birth, including chronic lung disease.

Harley had to have a stoma bag fitted, which has since been removed, and Harry needed injections in his eyes to help prevent premature blindness. They were also both diagnosed with a serious gastrointestinal problem called necrotizing enterocolitis, which can be fatal.

As a result of their health issues, Jade was told to prepare to say goodbye.

‘We were told to get the family in and have a christening,’ she recalled. ‘I kept referring to the christening as “the funeral”. It was just awful.’

Even though the odds were stacked against them, both of the twins are now able to go home at last, with Harley joining her brother at home on Monday.

Jade said: ‘We’ve waited 140 days for this. It’s really emotional. Sad to leave the team but happy to be going home.

‘After they were born, I was Googling twins who survive at 22 weeks and trying to find any that have to give me hope.

‘I found a set of twins in America who had survived – they’re four now. I’ve connected with their mum on Instagram, and she guided me through the first few days of being in the unit and what to ask for.

‘I’m really lucky that I went to Queens instead of Derby. If I’d gone to Derby Hospital, I wouldn’t have come home with any babies, and that’s where the ambulance would have taken me because of the catchment area – it’s a postcode lottery.

‘They’ll go down in medical history – I’m pretty sure they’ll be having on of the wards named after them because everyone is just amazed by them.’