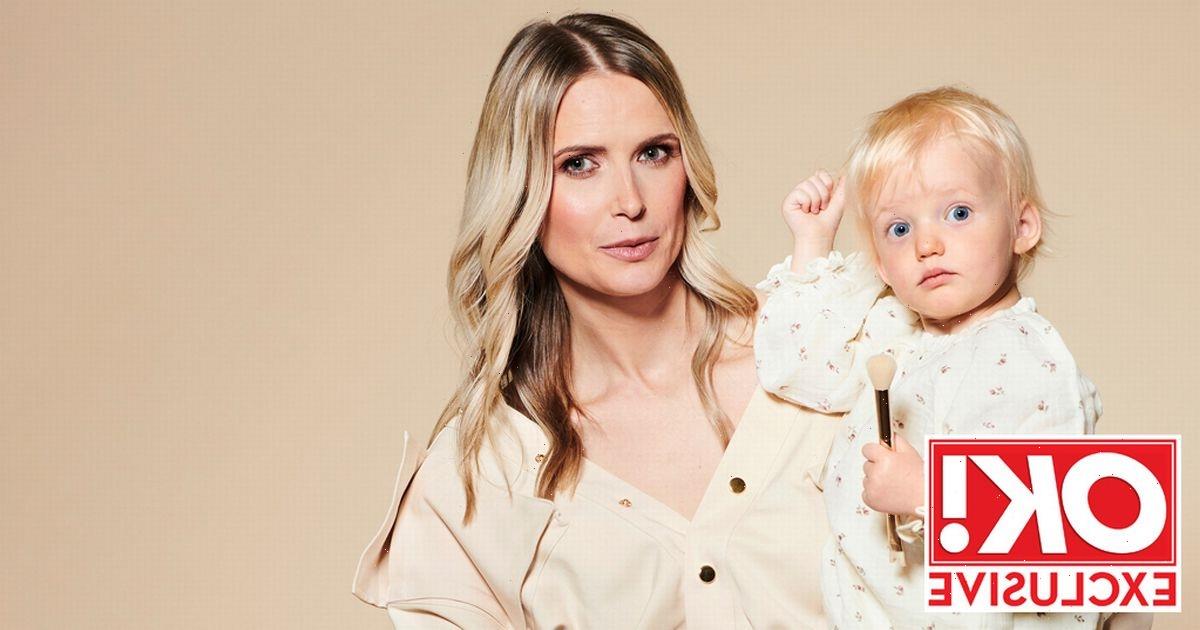 To an outsider, TV presenter Jo Wilson, 37, seems to have a charmed life. The beautiful blonde has a dream job at Sky Sports, is proud mamma to Mabel, nearly two, and she lives in a chocolate box pretty Cotswolds cottage with her loving partner Dan, 42.

But no one is exempt from getting cancer. And Jo – who’s presented Sky Sports since 2015 – was diagnosed with stage 3 cervical cancer earlier this summer.

Heartbreakingly, Jo’s main fears about the killer disease aren’t for herself – but for her daughter, who turns two this month.

And Jo’s darkest times since discovering she has cancer, have been her fears for leaving Mabel motherless.

“Every time I looked at Mabel I’d be in absolute pieces. I don’t have a fear of dying, more a fear of leaving her, and not seeing her grow up. Mabel is very cuddly at the moment. She flies across the kitchen into my arms, chattering away.

“She’s so funny and she’s an amazing distraction. You need motivation to get through this and she will get me through. She keeps me positive and in the present. For her, I have to be there and carry on.”

Jo’s IT consultant partner of six years, Dan, has been an incredible support to her.

“There was a lot of hugging and a lot of crying,” says Jo. “Dan went into practical mode going to the health shop buying cherry tablets and turmeric and he’s been feeding me daily berry smoothies for the antioxidants.”

Jo, who had always prided herself on being fit and healthy, is now undergoing six weeks of cancer treatment.

She had always been vigilant about attending her smear tests, but Jo was pregnant with her daughter Mabel when she was invited to attend. Pregnant women are not advised to have smear tests, so the presenter put the letter away.

Then, after Mabel arrived in September 2020, Jo assumed her extreme fatigue, heavy periods and niggle that something wasn’t ‘quite right’ was all part and parcel of first time motherhood.

“My periods were irregular, close together and heavy. I thought that was normal for a new mum, along with the tiredness. I started googling prolapses, wondering if I needed a tweak down there. In my mind, it was 100% just some hangover from birth. “I was worried about having a smear after Mabel’s traumatic birth. I ended up with forceps and we both caught sepsis. I just didn’t want to be prodded in that area.

After a baby, you’re recovering from exhaustion. Self care is non-existent!”

“The gynaecologist said, “This doesn’t feel normal to me. I think there’s a possibility it could be cancer.”

“I felt like I’d been punched in the stomach. I wasn’t expecting that. I’ve always been sporty, eaten well and taken care of my health. But it’s a disease that’s out of your control.

"I started crying. “Am I going to die and leave Mabel without a mum?” That was my first thought – when you hear “cancer” that’s what you think. Just a week earlier I’d bought Dame Deborah James’s Rebellious Hope T-shirt. And here I was being diagnosed myself. It felt surreal.

“You’re desperately hoping there’s a chance it might not be cancer.”

Jo was booked in for further investigations and by mid July it was confirmed that unfortunately it had spread to her lymph nodes, which bumped it up to stage three.

“The consultant explained I was quite lucky it had only gone to two of mine. Stage four is when it gets very tricky in terms of being able to cure it.

“There were dark moments. I said to the doctor, ‘Am I going to die?’

“‘You’re not going to die,’ he reassured me. ‘It’s very treatable, and it’s very curable.’ I try to hold onto that, but there are no guarantees. The percentages are still a bit ropey. There’s something like a 70% success rate for this treatment. So I’ll take that.

“But you do still think there’s a 30% chance it won’t work. I try to believe everything else is in my favour, my age and I am fit. I must try to hang on to the positives. A friend sent a card saying, “One day at a time,” which sits on my windowsill to remind myself”.

“On 1 August I lay in the radiotherapy machine for the first time and cried thinking, ‘This is my reality for the next few weeks.’

“I feel wiped out, at any time I could get under a blanket – and sometimes I do. I’ve lost a stone, you lose your appetite.

“The lack of control can be difficult, because the treatment will either work or it won’t. I’m trying to live in the present. I’m a positive person, which helps.”

Despite her natural shyness, Jo is opening up about her experiences with the killer disease.

“I’m a very private person so this was a huge decision for me to speak publicly, and I’m way out of my comfort zone. But if I can make just one woman book her smear test or go for a check-up after having a baby then it’s worth speaking out.”

When it comes to the future, Jo is determined to remain upbeat with Dan by her side.

“We are not planning for me not to be here in any way,” she insists.

“I’m very much at the start of a journey that will affect my whole life and I’m still processing it. There will be challenges – the post-treatment recovery and waiting for more scans. Also, side effects like being plunged into menopause aged 38 and being infertile. That’s a lot to deal with, but I will, as and when I have to. This is the biggest challenge of my life so far but I’m not about to shy away from it.”

This September is Gynaecological Cancer Awareness Month 2022. Jo’s Trust is the UK’s leading cervical cancer charity. For more information about cervical cancer see the website, there is also a helpline 0808 802 8000.