On the eve of the Second World War, journalist Nancy Campbell finds herself in a battle for the truth. She is reporting from Warsaw in Poland on the shadow of conflict which has been cast across Europe and hoping that her press credentials won't be revoked in retaliation.

"In America right now [that] is very relevant," says actress Helen Hunt, who plays Nancy in the new war drama World on Fire. "I'm interested and very moved by this idea that your calling is to bear witness. Before we could all bear witness on our mobile phones it was people like Nancy that we relied upon so that the truth isn't massaged or flipped," she says. 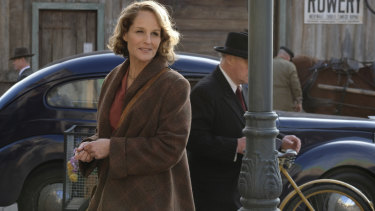 Helen Hunt as Nancy Campbell in World on Fire.Credit:ITV Studios

World on Fire is the story of World War II but not through the prism of the battlefield. Rather, it begins by taking a snapshot of interconnected lives on the eve of war: Nancy Campbell in Berlin, translator Harry (Jonah Hauer-King) working at the British embassy in Warsaw, Harry's mother Robina (Lesley Manville) and his girlfriend's father Douglas (Sean Bean) in Manchester and Nancy's nephew, medic Webster (Brian J. Smith), in Paris.

The series initially came about after a conversation between the writer Peter Bowker and producer Damien Timmer in which they discussed the impact the 1970s documentary series The World at War, produced between 1973 and 1974 and narrated by Sir Laurence Olivier, had on them. That series was considered a landmark in British television, the most expensive documentary project ever undertaken at the time.

Though World on Fire is vast in its scope, Bowker chose to write each of its disparate story elements as intimately as he could. "My approach was to make it feel intimate and be about people first and foremost rather than the big events," Bowker says. "In the first episode I am trying to set up that we do good things for bad reasons and bad things for good reasons. There is always a muddy ambiguity. And at the heart of the piece is people's attitudes during war, which are not always what you might imagine." 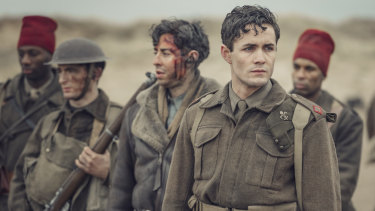 Jonah Hauer-King as Harry Chase in World on Fire.Credit:ITV Studios

The show's research came from three key sources: Professor Richard Overy, the head of history at Exeter University, who assisted with the project, a full-time researcher compiling material for the production and visits to London's Imperial War Museum, which holds a vast archive of material, both official and personal. "I thought I knew a bit about the war but it turns out I knew nothing at all," Bowker says.

Bowker spent many days poring over archival material but was at pains to ensure the narrative didn't come across to the audience as overly academic. He discovered, while examining documents and personal papers kept at the Imperial War Museum, how mundane people's war diaries were. "[Life] remained the same, falling in love, getting pregnant, somebody dying, somebody getting drunk," he says. "I found a diary written by a young Polish woman who, during the Siege of Warsaw, wrote about finding good coffee in her first paragraph.

"There was a diary by a British ambulance driver who was driving to Dunkirk to help British troops trapped there and he wrote, when we got to Dunkirk there was nowhere to park," Bowker adds. "What a great complaint towards the French. My scale as a writer is usually small so it was nice to think that I could also write a drama about Word War II focusing on ordinary people and the to's and fro's of family arguments. It's rather wonderful."

Bowker felt that he could humanise the story by focusing on people who were not war room decision makers, but whose daily lives were profoundly impacted by those who were. "These were a generation of people who would never have left their home towns but suddenly found themselves abroad with their lives on hold for five years or more," he says. "[It is] told from a multinational perspective; I wanted to write a drama where we invested in a Polish family, a French family, just as much as we emotionally invested in a British one." 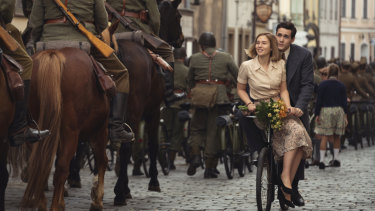 Jonah Hauer-King as Harry Chase and Zofia Wichłacz as Kasia Tomaszeski in World on Fire.Credit:ITV Studios

The show also boldly tackles a variety of circumstances, particularly for Webster who is in Paris with his male partner, an African-American jazz musician. "I deliberately set out to tell stories that weren’t traditional war stories," Bowker says. "I wanted to write about what it was like to be gay in Paris, when you’d escaped to Paris to celebrate your sexuality and then the Nazis invaded, to be an ordinary apolitical German family, who just hoped Nazism might be a passing phase.

"Pre-war Paris became a haven, especially for black American jazz musicians and for gay men … The bohemian scene in Paris was deeply attractive and people flocked to it for its liberal, slightly more open values compared with the rest of Europe," Bowker says. "Then the Nazis rolled in. What do you do? Do you stay and resist or do you run for your life? Drama is all about creating complications for the character and I’ve not seen that story told before."

Despite the fact the archetypal war correspondent of the era was male, Bowker was surprised by how many female war correspondents there were during World War II. From those threads, he created Nancy. 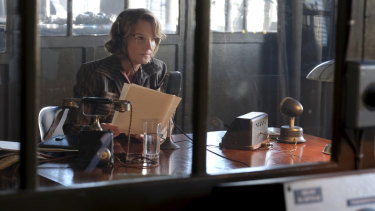 "I wanted to write about a woman who had experienced a severe trauma in her past and as a result had built a shell of wit and one-liners around her," he says. "But she also has a purpose, which is to guide us through the story and because she is a journalist, she can go anywhere."

Bowker says Nancy understands "that the power she has is completely dependent on being indulged, either by a political master, a censor or by her boss at home. The power she has, she has to earn, but is only granted to her by men."

Exploring the diversity within the story was important Bowker adds, because "at the heart of Nazism is a belief in racial superiority [and] this war was won by a multi-racial international alliance. It wasn't just won by white men and it wasn't just won, however much we like to believe it, by plucky Britain."