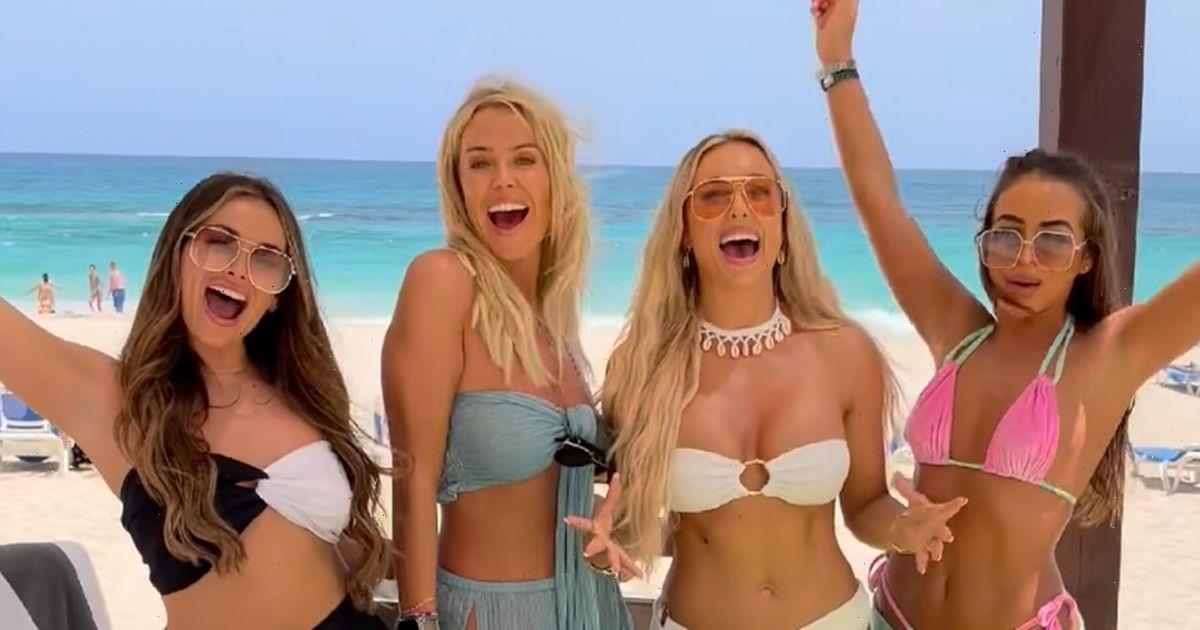 The Only Way Is Essex's new series had an explosive launch after the cast's turbulent trip to the Dominican Republic.

The reality stars headed to the five-star Hard Rock Hotel in Punta Cana to film scenes for the ITVBe show's newest series, with the hotel costing up to an eye-watering £2,000 a night.

But there were plenty of controversial moments during their time abroad, from cast members pulling out and feuds, to the group being kicked off their flight home.

With the start of the cast's holiday being shown in the opening episode last weekend, it's only fair to recap what happened on their trip and what we can possibly expect to see in the new series.

Chloe, Demi, and Frankie Sims were all notably absent from the TOWIE trip to the Dominican Republic, with reports that the three sisters had "disagreements" regarding the newcomers joining the show.

An insider told The Sun at the time: "Not everyone's happy about the new arrivals. It's ruffled a few feathers behind the scenes. There's been some big disagreements off-camera that resulted in the sisters deciding to pull out of going on the trip two days before they were meant to fly out.

"Every year the three sisters are top of the list of the returning cast. They're the biggest characters who bring the sex appeal, glamour and good storylines. Everyone's talking behind the scenes about why they're missing."

There are three new Essex-based stars that have joined the new series of TOWIE, with Love Island's Elma Pazar, Jordan Brook, and Junaid Ahmed all starring in the newest series.

Pete Wicks pulled out of filming

Long-standing cast member Pete Wicks dropped out of the Dominican Republic holiday back in June after the death of his nan Doreen, according to co-star and ex-girlfriend Ella Rae Wise.

The reality star was going to be jetting out on holiday with the rest of the cast initially, but opted to take time off work to spend time with his family following the loss.

"I messaged him and wished him my love," Ella told The Sun. "I think he is doing ok."

Confirming that Pete couldn't have travelled over to the Dominican Republic given the timing, Ella added: "It would have been hard for him to be here."

Pete was reportedly very close to his nan, with the reality TV star having her name tattooed on his hand.

The first episode of the show saw an intense showdown happen between Ella and Amber Turner in the Dominican Republic, all surrounding Ella's claims that Dan Edgar touched her inappropriately during a night out in Essex.

At the end of the series' opening episode, the two women are seen rowing with one another as Amber, 29, says: "We all know it's a lie."

Dani Imbert, 21, and Ella laugh at this as Amber says: "She's so shocked because she knows it's true."

Ella, Amber, and Dan have since took to social media ahead of this week's episode, with Amber calling it a "pathetic lie" and that the "defamatory allegations are categorically FALSE".

Dan wrote: "The person this has come from was taken out of filming this week for making false allegations in the press which have now been retracted."

The reality star then said the ordeal has been escalated to a legal matter as he continued: "I can't say too much on this matter as it is being dealt with legally," before urging viewers to be mindful when watching the show.

Rejecting both Amber and Dan's posts, Ella has also taken to her own social media, where she insisted she is not a liar before explaining exactly what she meant with her claims that Dan touched her inappropriately.

"I'm not going to be painted out to be a liar because that's one thing I'm not. What happened with Dan was a simple hand hold & hands on my waist which I personally wouldn't be happy about if it were my boyfriend," she told her 253,000 followers.

Either way, it's going to be an explosive spat between the two of them.

Arguably one of the biggest stories from their time away, the cast were controversially thrown off their flight home to the UK after allegedly refusing to wear masks and vaping on-board the plane.

Show newbie Pia Grace Smith took to Instagram at the time to reveal that she and "half the cast" were stuck in Madrid after they were thrown off the plane.

Taking to her stories, she said: "24 hours later, we're still travelling, we got chucked off the flight because we didn't wear masks, it was like half the cast that got chucked off.

The group were making a connecting flight back to the UK in the Spanish capital when it was revealed that the group would not be allowed to board the next plane, with sources telling The Sun that they were spoken to by police for their behaviour.

The source said: “Fumes were visible above their seats. They were asked to stop but refused. It was appalling behaviour. Absolutely idiotic.”

An Air Europa spokeswoman confirmed an incident occurred on the flight in a statement that read: "There was an incident on the flight. Following protocol, several passengers were asked to leave the plane for refusing to wear the mandatory masks and one of them for smoking inside the aircraft.

"While leaving the plane, they were accompanied by other passengers without further incident."

Meanwhile, Spain's Civil Guard confirmed they were called to the flight after the captain reported a group of four men and five women after a disturbance on the plane – with the group reportedly fined for their behaviour.

They were later accompanied by police to another flight bound for the UK that night.

Yazmin was also seriously injured in the crash, which made viewers uneasy knowing that she was just weeks away from the incredibly traumatic incident.

Taking to Twitter, one person said: "Feel a bit uneasy watching Yaz knowing weeks after this was filmed she nearly died."

A second wrote: "The producers should have advised Yaz not to take part in this season and to rest. This just seems a bit much."

"Awh I just know lockie would of been so worried about yaz after her accident seeing how friendly they are," another said, reference her ex-boyfriend James Lock.