For anyone who has watched the Tour de France since SBS turned it into one of the great annual events on Australian television, there have been more iconic moments than there are riders in the peloton every year.

Lance Armstrong, for example, taking a juddery accidental detour across a mountainside on the way to yet another win before being stripped of his seven titles for doping. Cadel Evans edging in front –second by nervous second – on the way to a historic Australian victory in 2011; a panicky Chris Froome ditching his bike to run up the mountain in 2016; and Australian sprinter Caleb Ewan's primal scream after winning his first Tour stage last year. 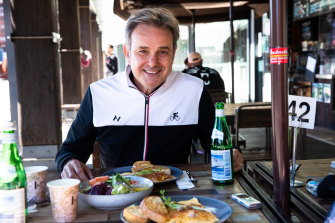 Then there are all the sweeping shots of grand chateaux, ancient aqueducts, picturesque villages, galloping horses, fields of sunflowers, snow-kissed alps, dancing children and giant bikes made from hay bales.

Mike Tomalaris has been there for all of them: the passionate and genial host of the broadcaster's coverage. A football journalist co-opted from the European Championships to report on the Tour's growing Australian presence in 1996, he is covering his 25th race – a very different one – this year.

"I really did think I'd be only there for one year," he says. "But when the Aussies started to arrive [to race], the viewing numbers started to increase. Then I knew we were on to a winner." 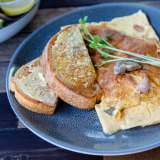 Finding somewhere to have lunch with Tomalaris is easy. He stops off sometimes on Saturday morning rides from the southern suburbs at BarCycle, a Walsh Bay cafe and bike shop and owned by former professional rider Alberto Talone.

Choosing what to eat is just as easy: from a bike-race themed menu that includes Italian Giro, Spanish Vuelta and Tour Down Under breakfasts, it's two Tour de France omelettes, two mineral waters and a green salad to share. Healthy and on topic.

Tomalaris, the patron of the Sydney University Velo Club and a regular charity event rider, talks about the great race with all the impetus of Peter Sagan hurtling down a mountain road. He reckons half the television audience watch for the racing; the rest for the cultural experience.

"First and foremost, it's the pushing of pedals," he says. "And these guys have to back up every day for three weeks. There's no other sporting event that runs for that time.

"But it's also the scenery, it's history, it's cuisine. It's got so many layers, the Tour."

Tomalaris admits he knew little about cycling for his first Tours and he would come back home to Australian viewers – also new to the sport – asking such basic questions as "why does the bunch stay together?" and "what is it with the jerseys?".

Now the viewing audience – at least those not watching just to plan their next European holiday – are largely familiar with such terms as domestique, flamme rouge, chapeau and all the rest. Some set up their bike trainers in front of a screen and cycle along with the peloton.

When the food arrives, Tomalaris notes the omelette neatly matches the maillot jaune – the famous yellow jersey – then quickly gets back to how the Tour has changed since his first job was to Australianise the British coverage.

Armstrong helped popularise the event ("Sure he was a bad boy, sure he was a bully, sure he was a cheat and a liar, but [before that was revealed] Australians could relate to him as an English-speaking non-European"); the Tour's first language has changed from French to English ("A Frenchman hasn't won since '85"); and then, remarkably, a former mountain biker from the Northern Territory won the race.

Tomalaris says he still gets chills thinking about Evans' win.

'The Tour throws up something new every day … I don't suspect it'll be any different this year.'

"Australians have achieved so much success in the world of sport with the likes of Jack Brabham, Don Bradman, Dawn Fraser and all our Olympic champions in the ensuing years but what Cadel did really was the last frontier for an Australian sportsman," he says. "It was such an incredible moment."

Tomalaris remembers executives from the country's three commercial networks all calling the SBS managing director the next morning to offer congratulations and asking, just in passing, when the contract to broadcast the Tour ran out.

The current answer – in case they are still interested – is 2023, with negotiations under way to extend for another five years.

This year's race, 21 stages over 3470 kilometres from Nice to Paris, will be a different experience.

No Gabriel Gate's Taste Le Tour – a TV showcase of recipes from each region – for a start.

"He used to go over in May, record 21 segments, turn them around very quickly, fly back, produce them, present them and it was a hard challenge as he got older so he decided to give it away," Tomalaris says.

The broadcast's new French chef is celebrated restaurateur Guillaume Brahimi who will focus on classic cuisine.

Former winners Froome and Geraint Thomas and champion sprinter Mark Cavendish are all missing too – dropped from their teams for lack of form during a COVID-19-disrupted season.

With riders staying in a "bubble", crowds watching the race are expected to be well down and, in another change in response to calls of sexism, Tour organisers have ditched the tradition of two podium hostesses for one man and one woman. 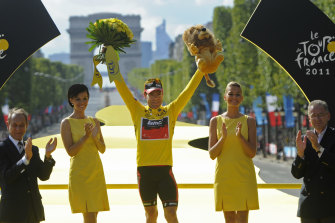 Off screen, the biggest change is that COVID has stopped the SBS team going to France. While Tomalaris has a Greek family heritage – his parents arrived from Romania in 1950 – he reckons he feels more French after 24 consecutive annual visits. But they have not exactly been relaxing visits.

"We only get about six hours sleep when we're covering the Tour over there because we're following the riders – not literally but we're at the finish line every day and it's an event that moves," Tomalaris says.

"I return the car to the Charles de Gaulle Airport every year. I throw the keys at the attendant and say, 'There you go, you can have it.' He looks at the speedo and says, 'Monsieur Tomalaris, it says 7000 kilometres. This is not possible in 28 days.' 'Believe me, buddy, it is'."

Instead, Tomalaris and three-time green jersey winner Robbie McEwan will be broadcasting from the Sydney studio while commentators Matthew Keenan, David McKenzie and newcomer Bridie O'Donnell – a former professional cyclist, medical doctor and women's sport advocate – will be in a Melbourne studio.

The race has been delayed by two months but virus cases have spiked again in France, with more than 3000 daily cases last weekend.

"The Tour will start but will it finish?" Tomalaris says. "All it may take is one positive result and riders will drop out left, right and centre. They don't want to be infected. That's my biggest fear. We've put so much money and effort and taxpayer's budget into this, it would be a travesty if it doesn't finish." 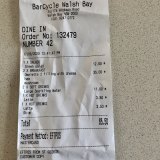 The bill for the lunch. Credit:Bar Cycle

"I'll be surprised if he doesn't win more than five in his life," Tomalaris says. "He won his first Tour as a 22-year-old with a lot in reserve."

There are also high hopes for Ewan, the Australian who won three stages last year.

"Caleb is the best sprinter in the world," Tomalaris says. "He won stages in his first year. Robbie, it took him three years before he won his first stage in 1999. I'd like to think he'll win more than one or two this year."

Does he believe that better drug-testing has rooted out the drug cheats? That a "positive" is more likely to be for coronavirus than doping this year?

"There might be some cyclists that are still taking doping products – I can't be sure – but my theory is that when the big races come around … it's not necessarily those at the front of the peloton who are taking them," Tomalaris says. "I really believe it's those at the back who are trying to keep up. All they're really interested in is extending their contracts and putting food on the table for their families."

What is he hoping for in terms of TV moments?

"The Tour throws up something new every day," he says. "If it's not a crash, it's controversy. Last year it was the landslide. I don't suspect it'll be any different this year. It's chess on wheels, it's a love story, it's a tragedy, it's beautiful, it's got everything. There's nothing quite like it in world sport."

As I pay the bill – after Talone has tried to wave it away – he and Tomalaris start chatting as cyclists do: about Belgium's next Eddy Merckx, whether Australian Richie Porte has a chance, what bikes are selling. You get the impression Monsieur Tomalaris could talk all afternoon about cycling.

The Tour de France screens on SBS from August 29 to September 20.