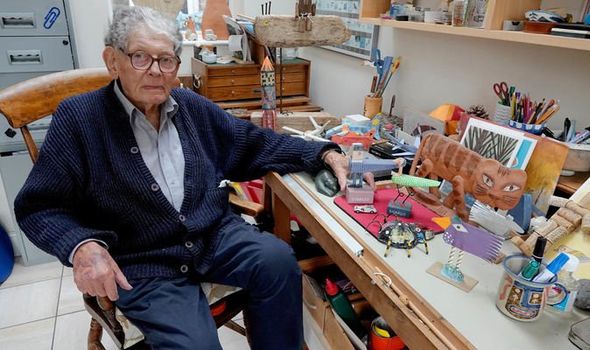 Dangling in the bay window are a collection of his handmade gems: an angel, a witch on a broom, a tree silhouette with birds in its branches, a pair of wooden seals and a medley of star-bound rockets. While on the lounge table are three little penguins standing regimentally straight. Yet with the flick of a finger, they can be made to “walk” in unison by moving the cleverly designed split base. In a flash of hands belying his 94 years, the doyen of designers swoops up one of his favourites, a blue wooden aeroplane.

“This is my special peace aeroplane,” explains Tom, as he glides it through the air before pressing a button that cleverly releases a miniature bomb tucked under its belly. “Don’t worry,” he chuckles. “It’s a peace bomb and, when it lands, it releases a special mist which makes everyone happy and sensible and stops them being at war.”

Every inch of shelf space in Tom’s Cambridge living room workshop is taken up with his gloriosuly multi-coloured collection of handmade animals, mostly birds, made from papier-mache and old wire coat hangers.

Given his pedigree as one of Britain’s most famous designers, responsible for scores of famous products, especially toys, it’s no surprise. And you can’t fault his infectious, positive message for children that the world should be a fantastic and mysterious place.

That Tom rose to the level of a leading designer, capable of turning his hands to anything, is quite remarkable considering his chaotic early years.

Born Thomas Joseph Derrick Paul Kohn into a wealthy Viennese family in March 1926, he spent his formative years in Brno, an industrial city some 120 miles from Prague in what was then part of Czechoslovakia. 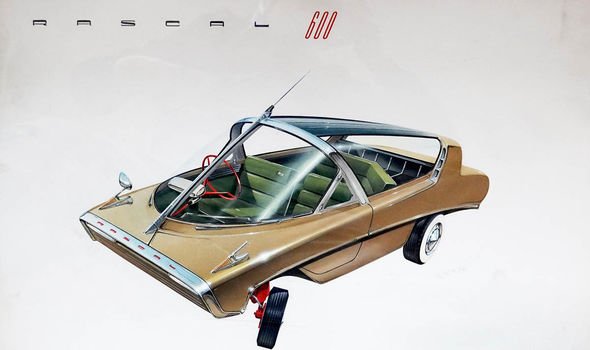 His father Pavel, who was of Jewish heritage, had inherited wealth through a family-run bricks and cement works, and married a Christian, Margaret, the daughter of a well-known portrait painter Arthur von Ferraris. But their lives were turned upside down when the Nazis invaded Czechoslovakia.

For three years the family moved around Europe, eventually arriving in Bristol as refugees in the summer of 1942 when Tom was 16.

In 1945, he studied aircraft engineering at Loughborough, designing a car, which he called the Vimp, in his spare time. Working for Ford and British white goods’ companies gave him an all-round design education.

Pride of place in his living room is arguably his most successful design – a gleaming red Raleigh Chopper bike.

With its unique dragster-influenced design, the Chopper became a cultural icon in the Seventies and Eighties and a bestselling bike for the Raleigh Bicycle Company of Nottingham which had commissioned Tom to come up with a striking new design for youngsters.

The story of the Chopper’s rise to fame and fortune – at least 1.3 million of the bikes were sold – is beautifully told in Tom’s entertaining memoir, Toymaker, which is published tomorrow.

Raleigh came to him in 1966 while he was at the helm of the Letchworth-based Ogle Design company. Inspired by the design of classic American motorcycles, a US firm had come up with a model called the Sting-Ray, which had ape-bar handlebars, a banana-shaped long seat and a long curvy frame.

Fascinated with racing cars as a child, Tom, had already envisioned a vacuum cleaner for Electrolux with larger wheels at the back, giving the impression of power from the rear.

He took that idea further with the Chopper. “This was a project for which the big back wheel could be not just a flourish but the beginning of a conceptual core around which everything else could be built,” he explains in his book. 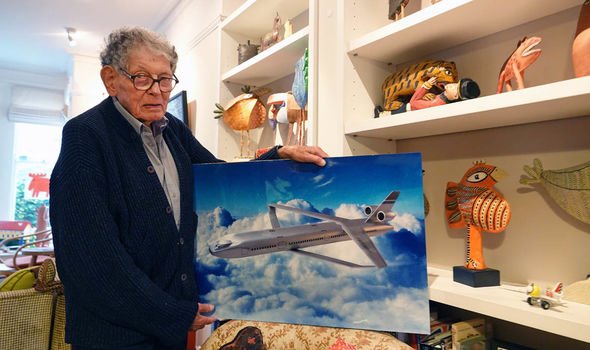 Astonishingly, Raleigh rejected the early design because of the production cost of having two different-sized wheels, but Tom stuck to his guns and won the argument.

He included some design gimmicks he knew kids would love.

“Beneath the seat there were springs – which didn’t actually do anything – and on the rear wheel there was what was like a disc brake, which similarly, was purely decorative,” he chuckles.

“We also raised the mudguards right off the wheels, to imply there was racing suspension and that it needed that kind of clearance to cope with it. Again, this was pure fantasy, but children loved it.

“With a kickstand that allowed you to park it as if it were a motorcycle, it looked and felt like a proper, dangerous, noisy, high performance adult machine. I knew it was a winner.”

His daughter Josephine, 53, sitting astride the bike, says: “Dad deserves full credit for this amazing bike.

“For us four children, growing up was fantastic, because he would bring a lot of the designs home for us to play with and we would see him sketching out new ideas all the time.” 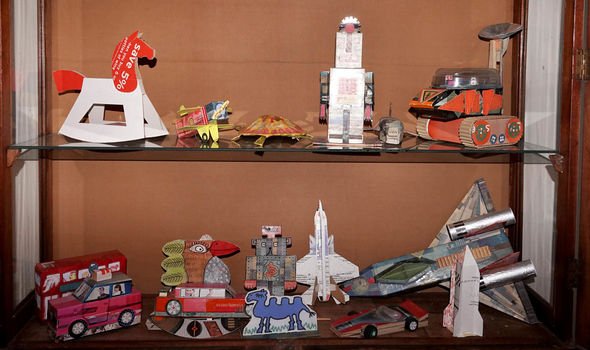 To some extent, the Chopper – well-preserved examples of which can today sell for hundreds of pounds to collectors – embodied youth culture of the time while also turning around Raleigh’s fortunes.

But when the bike firm’s then technical director Alan Oakley later claimed he was the brains behind the Chopper, it irked Tom no end. He admits: “It did get up my nose when Mr Oakley claimed the credit, so all I am doing is setting out the complete story as it unfolded.”

Tom – who also came up with the Marble Run game, the Bond Bug car and an award-winning washing machine among scores of other successful designs – puts his imagination to work every day to build his simple but effective creations.

In the Aladdin’s cave that passes for his living room, there is a beautiful designer mirror, which looks as if it’s just been delivered from Harrods.

“Oh, I just knocked that together with some bits of wood I came across,” he smiles. “It didn’t take very long.”

In the kitchen, hanging from the ceiling is a papier-mache pig with wings attached and a cord to pull to make them flap up and down. “See… pigs can fly,” laughs Tom. 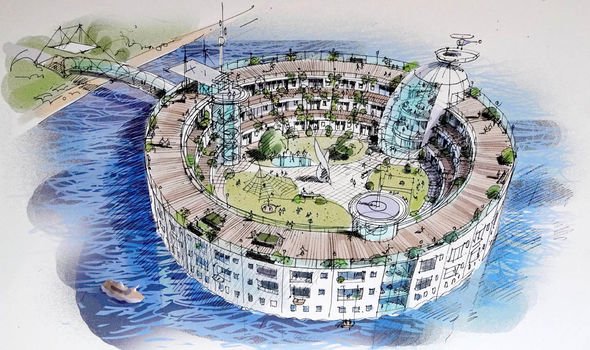 His huge archive of designs are held in storage by London’s Victoria and Albert Museum because they led to so many products which we take for granted.

While at Hotpoint he came up with the idea for a top-loading washing machine, and for the radio firm Bush his easy-to-carry radio was a surefire hit.

Car enthusiasts will remember his two great motoring achievements – the Scimitar GTE, a sporty saloon model, and the Bond Bug, a futuristic two seater, three-wheeled micro-car, both for Tamworth-based Reliant.

“I loved the Bond Bug because it was a little Ferrari for 16 year olds,” says Tom.

“Commercially it was a failure [only a few thousand were made] but every owner loved their Bond Bug. For me that achievement was greater than the Chopper.”

Tom and his late wife Nicole had four children – Nicolas, Josephine, Max and Eugenie – and says the youngsters were a great source of inspiration.

He came up with the idea of a baby walker to aid one child learning to walk and it took off globally. 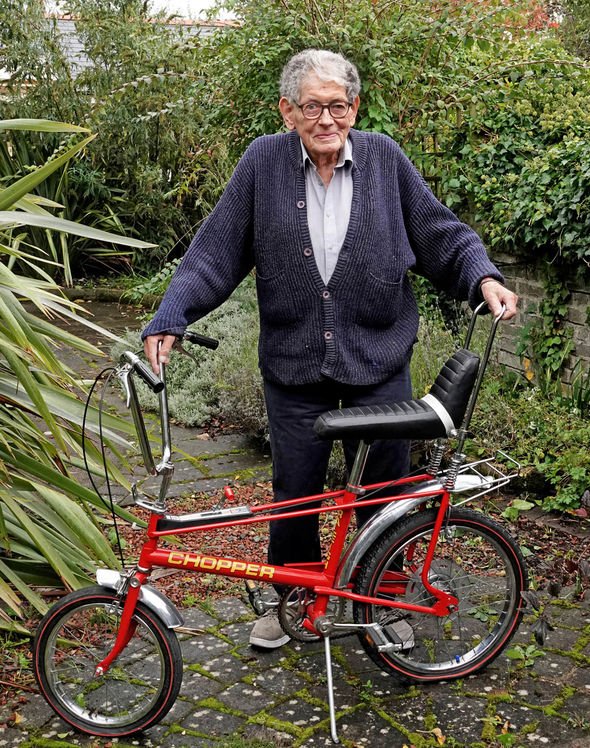 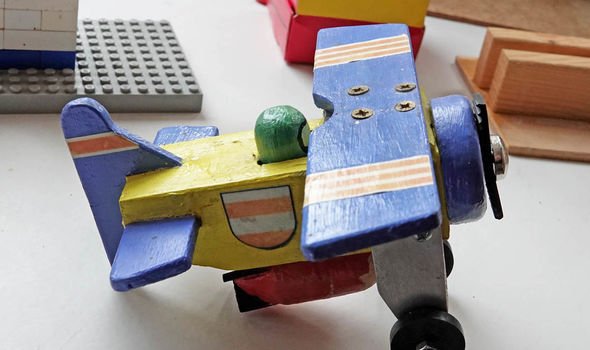 When he noticed their love of marbles, he designed the Marble Run game which would become a global bestseller to this day. He now has seven grandchildren to keep his creative mind occupied.

Unveiling a picture of his vision for air travel in the future, he says: “There’s a completely new wing configuration and a wide horizontal fuselage to make flying more spacious and comfortable. I would love to see that idea come to fruition one day.”

And then there’s his plan for a circular floating city, a kind of Noah’s Ark, which might be needed sooner than people think.

In the meantime, Tom’s more than happy pottering about at home with his creations and, when asked which of his inventions is his favourite, inevitably answers: “My next one.”

Toymaker: My Journey From War to Wonder by Tom Karen (Blink, £18.99) is published tomorrow. For free UK delivery, call Express Bookshop on 01872 562310 or order online at www.expressbookshop.co.uk