After working through the pandemic at Sydney’s Royal North Shore Hospital, Phoebe Steyn is counting the days until she flies to Bali for seven days of yoga, massages and flopping by a pool.

The mum-of-three is among a growing number of Australians planning – or at least salivating over the thought of – a solo holiday to shake off stresses of lockdown and enjoy some much needed “me time”. 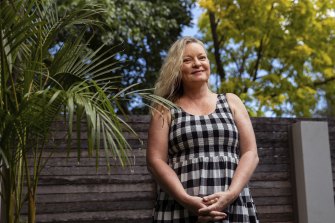 Mother-of-three Phoebe Steyn, from Sydney’s Petersham, is planning a solo trip to the beachside town of Canggu, Bali in May. Credit:Dominic Lorrimer

During the first 12 months of the pandemic, Steyn was working in administration in the hospital’s emergency department, which she describes as long hours and “just really exhausting work”.

For the past year, she’s been working on staffing the hospital – another extremely challenging gig during COVID-19.

“Mentally, I think everyone’s just ready for a break really,” says the 49-year-old.

She says she’ll leave her husband, their 17-year-old twins and younger son, 11, to “fend for themselves” while she enjoys a retreat at Escape Haven in the beachside town of Canggu in May.

Aside from massages, visiting temples and a little bit of homewares shopping, Steyn says she quite likes the idea of not having to talk to people all day.

“I’ll just sit and stare at the scenery all day, I love it,” she says.

Psychologist and mindset coach Sarah Godfrey says in her 20-year career, she’s never seen people as worn out as they have been in the past three months.

“I’ve never seen fatigue across all people, all ages, people who are just run down to nothing.”

However even a short solo break – even to a hotel room in the city – can help recharge the batteries, she says.

Godfrey says it doesn’t even have to be about exploring. “You can sit and look over the city, order your meal in and just have some time just to think.”

She says that might give a busy working parent, for example, time to connect back with who they were before they took on so many different roles during the pandemic.

While it’s clear that all of us could benefit from a break, working mums have definitely felt the added pressures during the pandemic.

A report released by Deloitte this year, which surveyed 5000 working women globally, found that 77 per cent of women had taken on more responsibility at work during the pandemic.

At the same time, 66 per cent still said they had the greatest responsibility for household tasks.

Taking some time out is a healthy strategy, says Godfrey.

“I think to be a better mum, better partner, better friend, colleague, all those things – you do need to take some time out to check in mentally how are you, and physically how are you? And then what are you planning for yourself for the following year?”

“I suppose [people] just need to be brave enough to turn around to their families and say ‘I’m out – I just need to go and rest’.”

For Victorian Amy Kinder, getting away for short breaks whenever COVID-19 restrictions permitted has helped her happiness levels during the pandemic.

Just as COVID was starting, she’d started a Facebook page called Mum’s Gone Again to document her solo adventures and encourage others to follow suit.

“I was a low-income, single mother of three, and just trying to survive and keep my own tank full, so that was what my motivation was and I was able to obviously show my kids how to do it,” says the Bendigo mum.

When the pandemic arrived, Kinder was wondering how she’d follow through on her plan. Fortunately she was able to sneak away for short trips in-between lockdowns, when her daughters were with their dad.

“I just started to explore Victoria – I would take off and just do 24 hours. So even if I was just cash-poor and time-poor, 24 hours still opened up a window of opportunity to go and do something,” she says.

The social worker sometimes sleeps for free in her seven-seater car, or rents accommodation for the night.

“I’ve travelled a fair chunk of Victoria – you know Echuca, Yarrawonga, Halls Gap, Horsham. The mountains or the beaches basically are my main go-to’s,” she says.

Her solo breaks, which she interspersed with family holidays when time and funds allow, have helped her deal with pandemic stresses, including the grind of working from home.

Kinder says there’s something “completely empowering” about going away by yourself. On past adventures she’s sometimes hiked, enjoyed a three-course meal, and taken a helicopter ride over the 12 Apostles.

And her advice for other parents thinking of planning a quick solo adventure?

“It only takes 24 hours and you can go somewhere, fill your tank, watch a sunrise, watch a sunset, hike a mountain, walk on a beach and be home again and the kids won’t even have had time to miss you.”