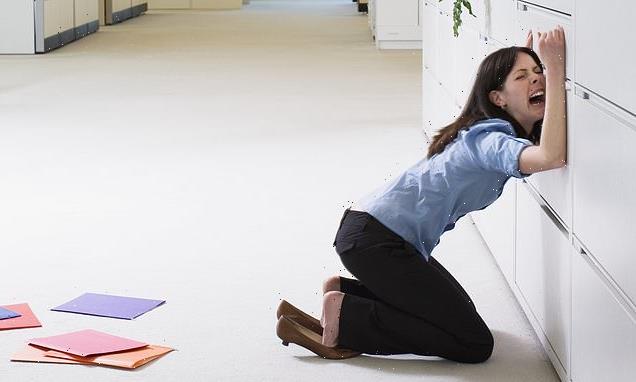 Throwing their toys out of the pram! People share the times adults acted like children – from a husband who threw a tantrum over mowing the lawn to an uncle who sulked over the ‘wrong’ Christmas present

We can all fly off the handle from time to time, but some people are worse than others at keeping their tempers in check.

People across the UK have taken to Mumsnet to share the most humiliating public tantrums they have witnessed in adults – and some have admitted to their own meltdowns.

The toe-curling stories include an uncle sulking over his Christmas present to a woman taking her daughter to Superdrug only for her to have an almighty meltdown.

Posting on the British parenting forum, one woman said that she had seen a woman in her 40s loudly berate a man working in a shop about a product she wanted not being in stock.

She said: ‘She then started to jump up and down on the spot stamping her feet like a toddler and then sat cross-legged on the floor in the middle of the aisle, arms folded, bottom lip pouted out.’ 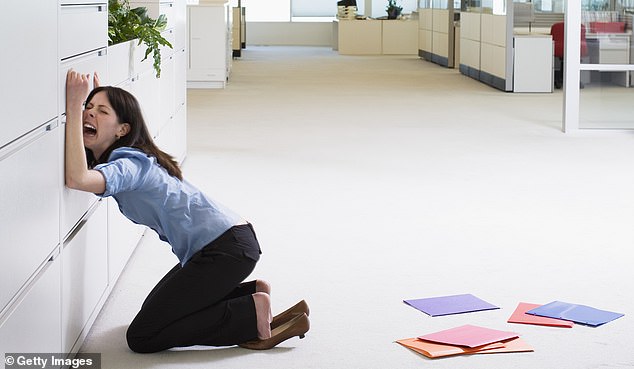 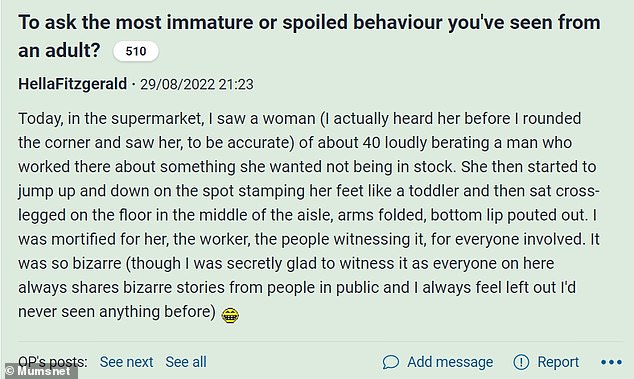 Writing on British parenting forum, this woman revealed that she had witness a lady in her 40s having a huge temper tantrum in a supermarket when the product she wanted wasn’t in stock

She asked people to share their stories of the most immature or spoiled behaviour they’d seen from an adult.

The woman added she was mortified for everyone there but ‘was secretly glad to witness it.’

Users were quick to reveal their most immature and embarrassing stories.

One woman revealed that her ex-boyfriend had a superiority complex and hugely embarrassed himself in front of the neighbours when he couldn’t park in the space outside of her house, because she was letting a guest use it.

She said: ‘[He] would arrive last and be outraged that he did not have one of the private spaces, so rather than park in the public one, he parked in my neighbour’s wide driveway, without asking.’ 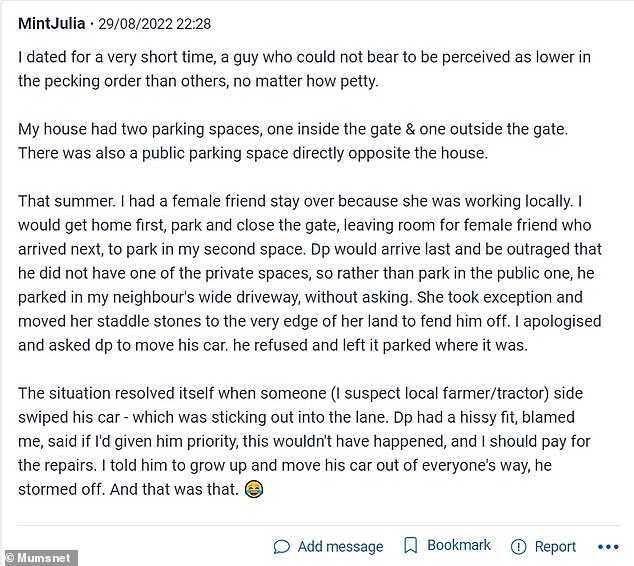 One woman revealed that her ex-boyfriend had a superiority complex and hugely embarrassed himself in front of the neighbours when he couldn’t park in the space outside of her house, because she was letting a guest use it

The neighbour was not impressed and moved staddle stones in her drive to fend him off, however the user explained how the situation resolved itself.

‘When someone (I suspect a local farmer/tractor) side swiped his car – which was sticking out into the lane [he] had a hissy fit, blamed me, said if I’d given him priority this wouldn’t have happened, and I should pay for the repairs.

‘I told him to grow up and move his car our of everyone’s way, he stormed off. And that was that.’ 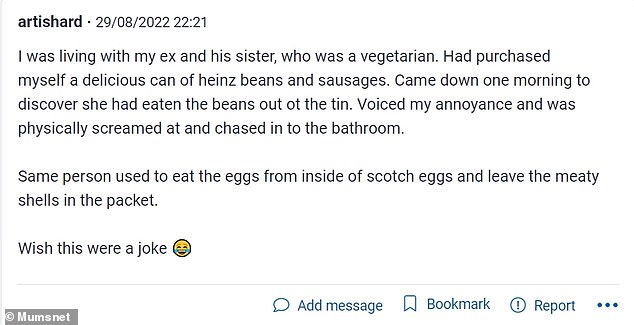 Someone else commented: ‘I know someone who only has photos of herself in her home. She has entire collages of photos, all of just her.

‘Also photo frames with multiple pics, all her. And even a digital photo frame that only has pics of her.

‘She will go on holiday with other people then only pick the pics of herself to display. Not a single pic of anyone else in her house.

‘So weird and the kind of thing a teenager would do!’

Another user said: ‘I was living with my ex and his sister, who was a vegetarian. Had purchased myself a delicious can of Heinz beans and sausages.

‘Came down one morning to discover she had eaten the beans out of the tin. Voiced my annoyance and was physically screamed at and chased in to the bathroom.

‘Same person used to eat the eggs from inside of scotch eggs and leave the meaty shells in the packet.

‘Wish this were a joke.’ 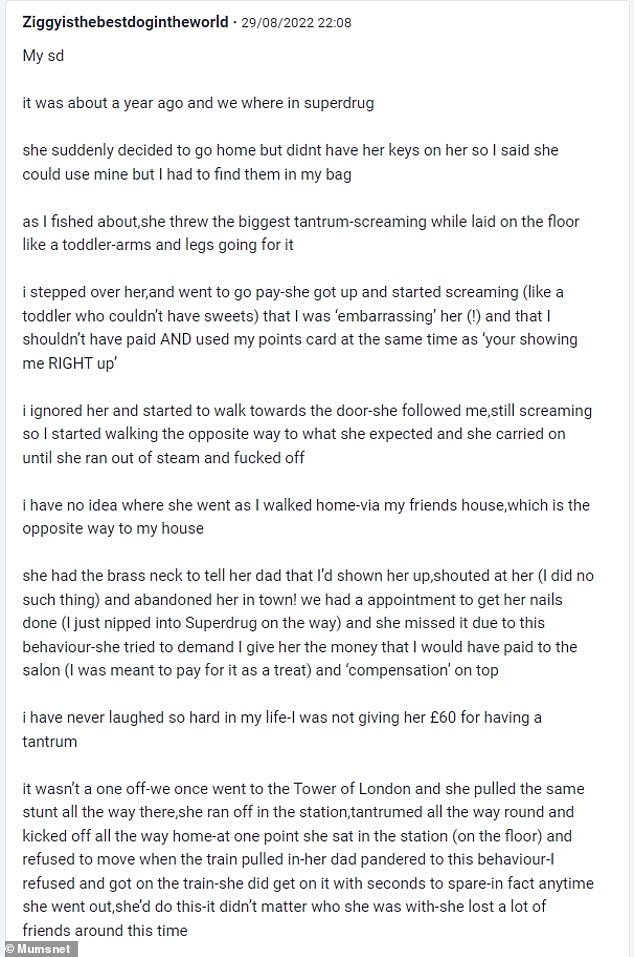 One woman have an extremely uncomfortable shopping trip with her step daughter. She doesn’t reveal the girl’s age but we can presume was too old to lay on the floor screaming like a toddler

Someone revealed how they met an immature man on the London Underground who tried his luck to get an available seat.

They said: ‘As I got onto a Tube carriage at one end, a very well dressed bloke got on the other end and sprinted down the carriage towards me to nab the last seat, landing on the cushion and turned to give me a superior grin.

‘I’d not been living in London long and kind of looked at him, mouth agape. The bloke sat next to him gave a slow hand clap and said to him “despite what you might think, it’s not musical chairs mate”.’ 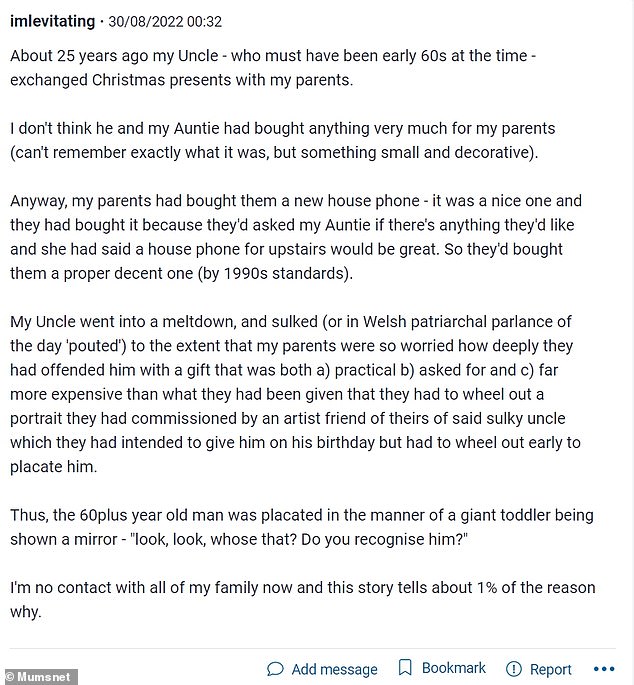 Elsewhere one woman shares an uncomfortable Christmas morning her parents had with her uncle and auntie, 25 years ago when her uncle sulked over his Christmas present to the point at which he got an early Birthday present

Elsewhere one woman shared an uncomfortable Christmas morning her parents had with her uncle and auntie, 25 years ago.

Her uncle sulked at the present her parents had given him and his wife, even though it was the exactly what they had requested – a house phone.

She said: ‘My Uncle went into a meltdown, and sulked (or in Welsh patriarchal parlance of the day ‘pouted’) to the extent that my parents were so worried how deeply they had offended him with a gift that was both a) practical b) asked for and c) far more expensive than what they had been given.’

She added her parents felt so awkward they had to give him another present – a portrait of him they had commissioned and planned to give him on his birthday – to pacify him. 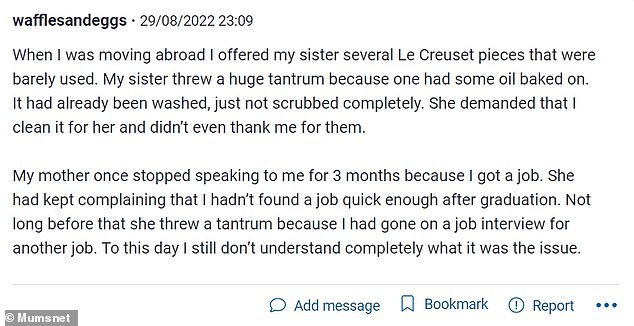 One woman reveals how her sister threw a tantrum over several Le Creuset pieces she gifted her because there was a bit of oil baked onto one. She was that out of control she couldn’t even say thank you