The Arrowverse 2018 crossover, "Elseworlds," is introducing not only an hilarious body-swap situation, but some new characters from the DC universe. Featured in the Arrow episode of the event, Mar Novu is inspired by "The Monitor" in DC comics, in which he’s also called Dax Novu. He is the son (sort of, the Monitor just subdivided himself, it’s a whole thing) of the original Monitor, who doesn’t have a name — which could mean Arrow is setting up Mar to be Dax’s father. However, as there is more information about Dax Novu’s history and role in the comic book ‘verse, let’s assume for the time being that the CW just changed the name.

Is Novu a villain? Kind of. His first job, as a Monitor, was to study the Multiverse, map it, and learn everything he could. There’s also a Dark Monitor, called Mandrakk, who’s kind of like a space vampire and tries to eat the Multiverse. In some comics, there is a Monitor and an Anti-Monitor; you can guess which one is the bad guy. There are a lot of different directions that Elsewords could take with Mar. One of them, according to this clip, is definitely bad:

But don’t let the high collar and cape fool you: there’s a distinct possibility that this character comes to Ollie, Kara, and Barry for help, rather than to hurt them.. Additionally, Arrow, The Flash, and Supergirl do love a villainous origin story. Maybe the crossover event strays him from one path and starts him down another. Maybe there’s two of them! One can only hope he hasn’t turned dark yet, because in the comics the Monitor has the power to shatter universes with horrifying ease, and that didn’t work out well when, over in the Marvel universe, a character went up against the Avengers with the same kind of ability.

The episode descriptions for the Elseworlds crossover don’t give any specifics about Mar Novu and/or what he’s up to. However, the image below shows him in Gotham (or in a parking lot where someone visiting from Gotham parked) and Jeremy Davies’ character John Deegan — who is based on John Dee, aka Doctor Destiny, from the comics. He’s also got a big book. What’s that? A map of the multiverse, perhaps? Some vessel for power? 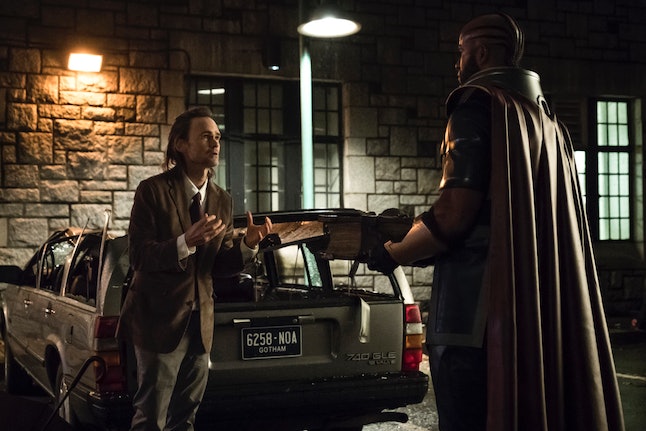 In an interview with Hidden Remote, Garrett additionally describes the character as "a weapons dealer to superheroes" and teased that "the Monitor did give the book to someone else, which allowed him to cause this chaos in reality and all that stuff." Could that be Deegan? They aren’t a team in the comics, so this could get interesting.

Unlike Mr. Freeze and Batwoman, who will also appear in the crossover, these are not Gotham or Arkham-specific characters. It’s possible that they are setting up a conflict for later and just teasing their villainous turns. Mar might be a "good" Monitor at this point in the story, like a hall monitor, overseeing the Multiverse and tracking what the different heroes on each Earth are doing to protect it. With so many options for the comics to choose from, it’s hard to know what will happen next.