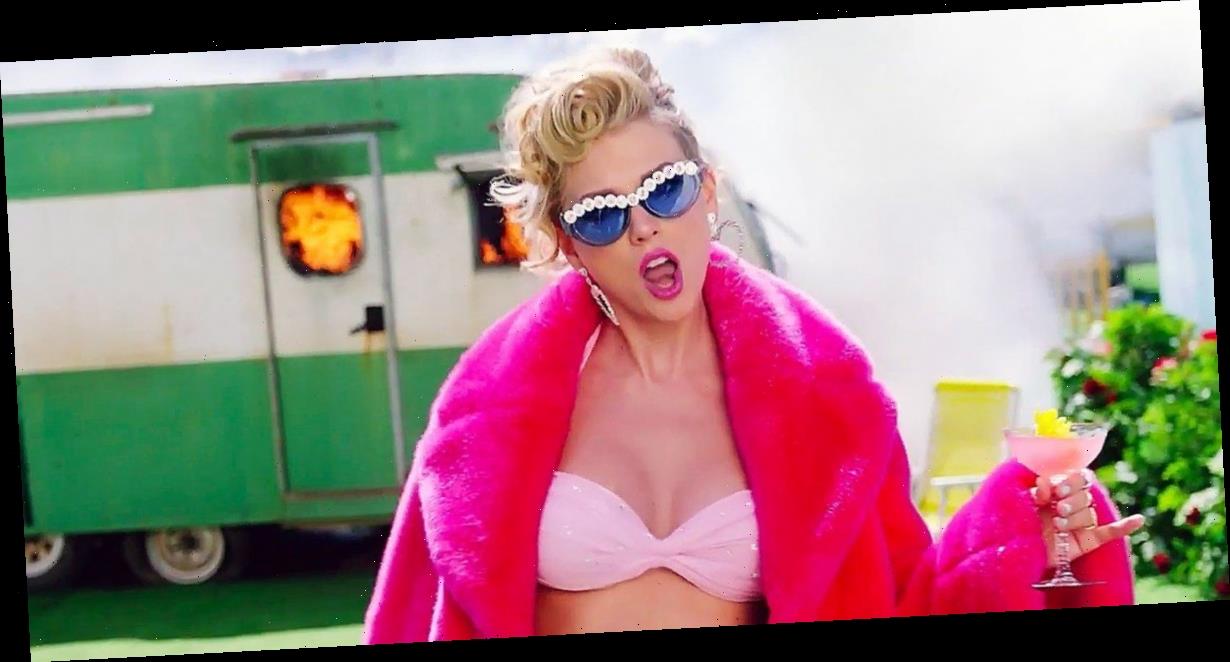 Loving and accepting yourself is easier said than done, no matter who you are or what you’re going through. Thankfully, for members of the LGBTQ+ community, there are a lot of people (including some of our favorite musical artists) who have been there before and want to offer their support through their music.

Here are the best LGBTQ+-inspired songs from the recent past that help spread the idea of love and acceptance of all people, no matter who they are or who they love, and some with lyrical tips for being an ally.

Fans of Kacey’s music already know she’s never cared much about what other people think, and in “Follow Your Arrow,” she encourages other people do the same. With lyrics like “Make lots of noise / Kiss lots of boys / Or kiss lots of girls / If that’s something you’re into” and “Say what you feel / Love who you love / ’Cause you just get so many trips ’round the sun,” she uses this song to tell her fans to live for themselves.

“You Need to Calm Down,” by Taylor Swift

One of the earliest singles from her Lover album, this song and music video (which included cameos from many members of the LGBTQ+ community, including the cast of Queer Eye) is a celebration of shutting down the haters who try to judge what other people are doing. “You are somebody that we don’t know / But you’re comin’ at my friends like a missile / Why are you mad? / When you could be GLAAD?” Taylor sings.

In this song, Macklemore raps about a time he questioned his own sexuality while addressing the fact that being gay doesn’t make anyone lesser than someone who is straight. In the chorus, Mary sings lines from her song “She Keeps Me Warm” about the love she has for another woman and how she’s unwilling to change who she is to make other people more comfortable.

“Born This Way,” by Lady Gaga

This song is probably one of the biggest LGBTQ+ anthems of the past decade—and for good reason. Not only has Gaga become a gay icon herself, but this song is all about celebrating who you are because it’s who you were born to be—no matter what.

In “Girls Like Girls,” Hayley—who is openly gay and has been called “Lesbian Jesus” by fans—sings, “Girls like girls like boys do, nothing new.” Has anything ever been more true? In the end, it really is that simple.

“Raise Your Glass,” by Pink

So much of Pink’s music is about self-acceptance, and this song is no different. In the chorus, she sings, “So raise your glass if you are wrong / In all the right ways,” and it’s all about being yourself.

This is another song that’s all about loving yourself for who you are. While Kesha doesn’t address the LGBTQ+ community directly, this song has definitely become an anthem anyway because it’s all about being who you are and making no apologies for it.

“Girls/Girls/Boys,” by Panic! at the Disco

Taking inspiration from her sister’s coming out story, Lauper has no fears about speaking out for the LGBTQ+ community. In fact, this song about being true to yourself became such an anthem, she decided to co-found True Colors United, a non-profit organization whose focus is to end homelessness for LGBTQ+ kids. #amazing

Well, Troye clearly wasn’t afraid to let the world know his preferred sexual position. This 2018 title track from his sophomore album is not only a great bop, but after hearing it, you’ll definitely want this to make the rounds at your next (virtual) Pride party.

“Make Me Feel,” by Janelle Monáe

Coming out as pansexual in 2018, Monáe proudly embraces her queer identity with this hit. Not only does it give the listener some truly funky vibes (after all, Prince did work on the tune with her), but she also made the point to feature on-again-off-again GF Tessa Thompson as her love interest in the vid.

“Strangers,” by Halsey and Lauren Jauregui

What happens when you get two proud bisexuals in the music studio? Fire, that’s what. This 2018 anthem is not afraid to tell the demise of what used to be a sexually desirable romance. I mean, if the lyrics “We’re not lovers, we’re just strangers / With the same damn hunger / To be touched, to be loved, to feel anything at all” don’t strike a chord, then what exactly does?

“Cool for the Summer,” by Demi Lovato

Well, Demi is never one to hide how proud she is of her queer identity, and this 2015 bop is just that. Telling the tale of a budding same-sex romance, Demi brings all the sexy and confidence to the perfect summer anthem.

“Take Me or Leave Me,” by Idina Menzel and Fredi Walker

Um, as if this isn’t the most iconic Broadway duet in the last 25 years. Taken from the groundbreaking 1996 musical Rent, these powerhouse voices (and believe me… you’ll be blown away) detail their pride for their truest identities—queerness and all.

“I Want to Break Free,” by Queen

Aside from the band completely dressing up in drag throughout the iconic music video (can someone please get me all the costumes ASAP?), how could someone not include this on their Pride lists? I mean, the song is about letting all inhibitions go an being true to yourself.

“This Is Me,” by Keala Settle

If you haven’t seen The Greatest Showman, stop reading this list and park yourself on the couch to watch it. Sure, the movie might take some liberty at the creation of one of the most recognizable circuses worldwide, but it’s the music which demands to be praised. I mean, with Keala Settle’s powerful voice belting out words of empowerment, how can anyone not feel the need to live life as their truest selves?

“Dancing On My Own,” by Robyn

It’s pretty easy to see why this track has become so resonant within the queer community. With an iconic video, a pretty powerful repeated lyric, and great beats, it’s the perfect anthem to sashay away with at your next Pride event.

Somehow Christina figured out exactly what we all needed to hear and crafted it into what is arguably one of the prettiest songs to ever exist. The message about loving ourselves, imperfections and all, has become a staple in the LGBTQ+ community and continues to be a source of strength for those who need just a little boost in queer faith.

Want more playlists and curated music news? Yeah. We know you do. You can find all of our music coverage here.