Fitness coach, 26, shares eye-opening snaps of her body taken just ‘seconds apart’ to prove how easy it is to create ‘toned’ physiques in pictures

A fitness coach has blasted unattainable beauty standards by sharing two bikini photos taken ‘seconds apart’ that look exactly like before and after shots of long-term weight loss.

Anjuli Mack on Saturday shared two mirror selfies taken in the bathroom of her Auckland home on New Zealand’s North Island with her 153,000 Instagram followers.

In the first, the 26-year-old’s bikini-clad body appears bloated with her stomach bulging outwards. In the second, her torso looks taut and toned with visible abs and a slightly protruding rib cage.

Ms Mack claims the dramatic difference is caused by her ‘puffing out then sucking in’ her stomach, and says the photos – which were taken ‘seconds apart’ – should serve as a warning to young women to take what they see online with a grain of salt. 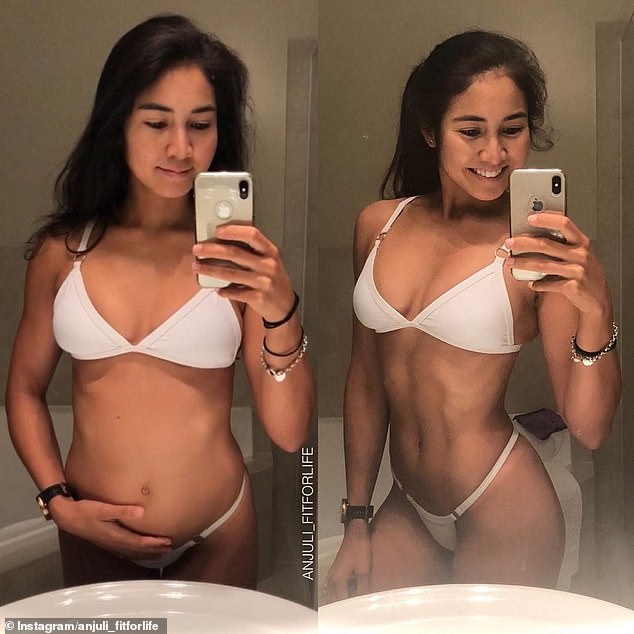 A cautionary tale: Fitness coach Anjuli Mack looks dramatically different in these two photos taken ‘seconds apart’, only because she’s puffing out (left) and sucking in (right) her stomach

‘This is not a before and after,’ she wrote in the caption, before slamming weight loss supplement manufacturers for promoting unrealistic aesthetic ideals.

‘Although it wouldn’t surprise me if fad diet, keto detoxes and random overseas supplement companies use [these photos] to promote their own agenda. It happens all the time,’ Ms Mack added.

‘Companies prey on people desperate for a quick fix, but in reality this is just puffing out and then sucking in.’

Sharing advice she said she wishes she had known at the start of her fitness journey in 2014, Ms Mack urged people to focus on getting into a calorie deficit – which involves eating less calories than your body requires for maintenance, leading to weight loss.

Carbohydrates are not the enemy, she warned, adding that everything from bread to pasta can be enjoyed in moderation provided it’s structured into your calorie count.

Ms Mack reminded young people to that ‘social media and magazines are not real life’, but rather curated snapshots tailored to draw engagement.

She also told followers to avoid fad diets and juice detoxes which are notoriously dangerous and are unsustainable, leading to rapid weight gain after a short period of loss. 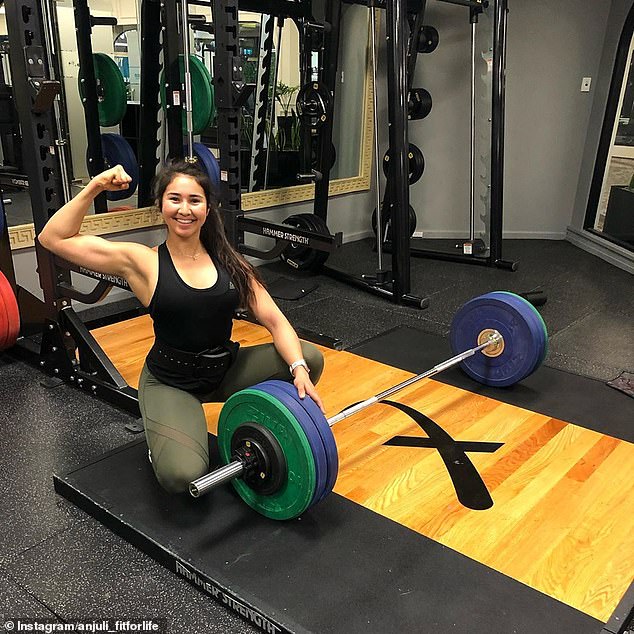 Ms Mack (pictured in the gym) reminded young people to that ‘social media and magazines are not real life’, but rather curated snapshots tailored to draw engagement 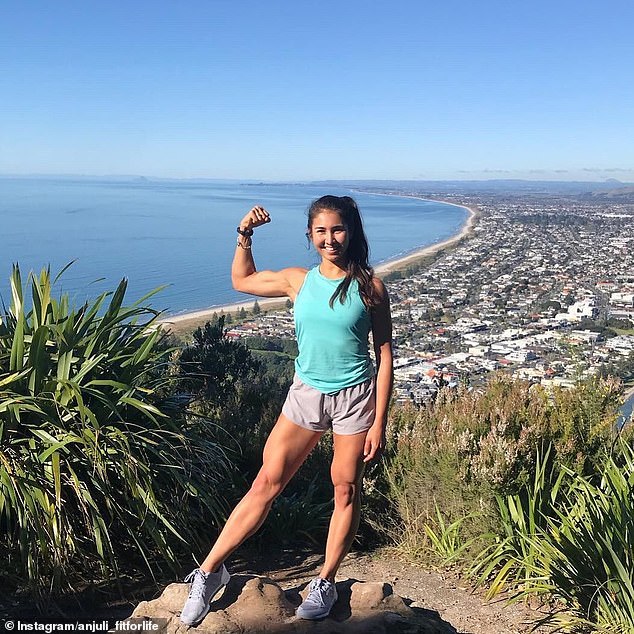 Ms Mack urged people to focus on getting into a calorie deficit – which involves eating less calories than your body requires for maintenance, leading to weight loss

But above all, Ms Mack asked people to be kind to themselves.

‘Years from now you won’t care about the occasional night you ‘fell off your diet’ with friends or the holiday with family where you felt bad for eating at the breakfast buffet,’ she said.

‘You want to remember the life time [of] memories made with loved ones.’

The fitness coach previously spoke to Daily Mail Australia about how she overcame a difficult relationship with her own appearance.

Anjuli Mack’s day on a plate 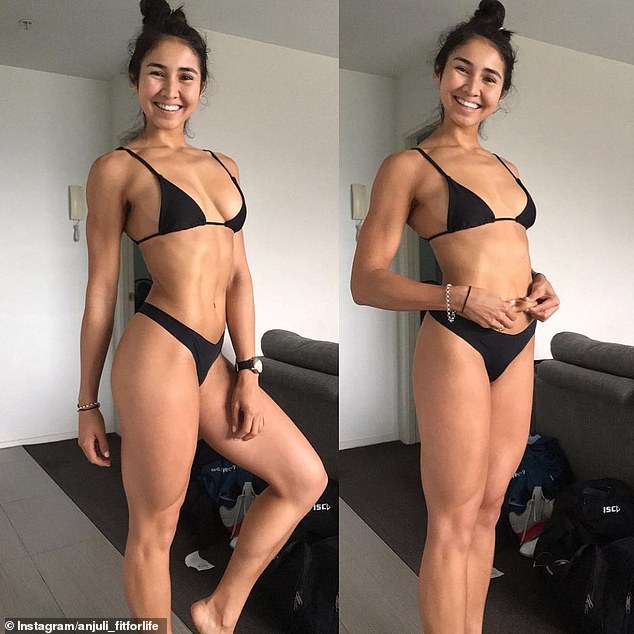 ‘Years from now you won’t care about the occasional night you ‘fell off your diet’ with friends or the holiday with family where you felt bad for eating at the breakfast buffet,’ Ms Mack says

She said she tried a string of fads including keto, a low-carb high-fat diet that forces the body to burn fat instead of carbohydrates, but nothing was sustainable and her weight constantly fluctuated.

‘I ended up developing a really unhealthy relationship with food and exercise as I was trying so many different things that weren’t working,’ Ms Mack said in 2019.

Educating herself about strength and nutrition led Ms Mack to realise there are no quick fixes.

Her diet is now balanced between lean proteins, ‘good’ carbs like rice and linseed bread along with plenty of fresh fruit and vegetables.

The video allegedly shows her opening fire at her ex’s fleeing fiancée, before pistol whipping her ex. A Mississippi councilwoman...