Between way too many rounds of butter beer, wand shopping ’til you drop, and the chance to see Hogwarts lit up in all its glory, there are a ton of things to do at Universal’s Wizarding World of Harry Potter. And while Universal Studios is always bringing new rides, shows, and attractions to the park, their latest and greatest roller coaster looks seriously unreal. That’s right, and if you haven’t already read up on The Wizarding World Of Harry Potter’s Hagrid Motorbike ride, it sounds like an enchanting new coaster that’s guaranteed to get any muggle excited. It pretty much goes without saying that my broomstick is all revved up and ready to go.

After far too much anticipation, Universal Orlando Resort in Orlando, Florida has finally revealed the name and opening date for the newest Wizarding World of Harry Potter ride, at long last. The new ride is called Hagrid’s Magical Creatures Motorbike Adventure, according to a Feb. 21 post on Universal Orlando Resort’s website. It’s set to open at the Florida theme park on June 13, 2019, just a few short months away. Luckily, it’s centrally located right in the middle of Hogsmeade, which — in case you aren’t well versed in The Wizarding World — can be found on Universal’s Islands of Adventure. According to Paste Magazine, it’s actually right where the Dragon Challenge Coaster used to be, right next to the Flight of the Hippogriff Ride.

The ride itself sounds like a bloody awesome adventure, if you ask me. Upon boarding Hagrid’s Magical Creatures Motorbike Adventure, according to the website, guests will actually be able to fly through the sky on Hagrid’s motorbike. After a few moments in the air, the ride will plunge down in front of an enchanting array magical creatures. Will Fluffy, the three-headed dog, be there? Maybe Fox the Phoenix? Honestly, I’m just really hoping that Buckbeak will make an appearance… that hippogriff will always hold a super special place in my heart. Take a look at the sketch, below — it should give you an idea of what to expect. 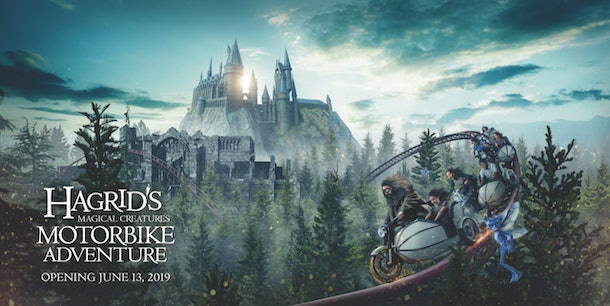 Wow, that looks wicked intense. TBH, I’m in the middle of booking my trip as we speak.

Once you’ve finished soaring through the sky alongside my favorite half-giant, definitely make a point to check out the wide selection of nibbles at Wizarding World of Harry Potter — everything is incredibly Instagrammable, and honestly, it’s a magical experience for any foodie. With options like chocolate frogs and cauldron cake, and sips like frozen butterbeer and pumpkin juice, there’s no doubt in my mind you’ll want to try it all.

There are so many things to do once you get to the Wizarding World of Harry Potter, but coasting with Hagrid on his Magical Motorbike sounds like something you definitely won’t want to miss. With the chance to see so many glorious creatures and the thrill of the ride, I know you’ll have a great time. Just make sure to eat afterwards, not beforehand — puking at the theme park is a total muggle move.