It’s been a long wait since the fall of 2017, but the trailer for the new season of Stranger Things finally arrived this week, along with the first promotional images from the new season. School’s out for summer just before the gang head to Hawkins High School for ninth grade, while the older set of cast members are either graduating or rising seniors this year. Everyone is growing up and these Stranger Things Season 3 promo pics are as much a snapshot of the awkward puberty phase as they are clues to the new season.

Seriously, the first thing about these images that got me is how much everyone has grown in the last 18 months since Season 2. Mike (Finn Wolfhard) is especially hard hit, as is Will Byers (Noah Schnapp), who is finally not the shortest in the group anymore. Also, the girls’ styles are just so on point with the rainbow sleeves, the top scrunchie ponytail, and Nancy’s perm, which looks like she stole the hair off the head of Jennifer Grey in Dirty Dancing.

However, once fans get past the growth spurts and the outfits, the story these images suggest that things are not going well in Hawkins this summer.

Here are the promotional images:

What’s Happening At the Hospital? 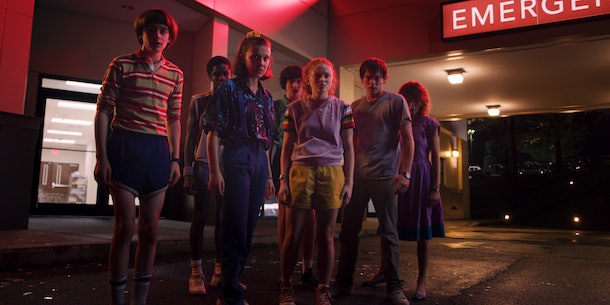 What is everyone looking at? Is it Dustin? I can’t say for sure, but he’s the one missing from the lineup.

This is worrisome because the trailer clearly shows the new Demogorgon coming out of the floor in an institutional hallway, one that looks suspiciously like what’s through those doors on the left. Maybe they’re looking at its dead body? 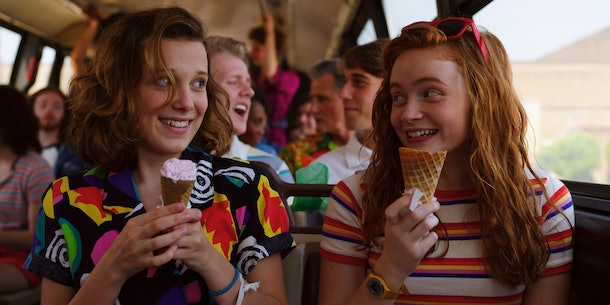 One of the big complaints from fans last year was how Eleven straight up dissed Max in a jealous snit over Mike, which was not just nonsensical, but the kind of cliche men write about girls rather than see through their eyes. It looks like the Duffers took that to heart. 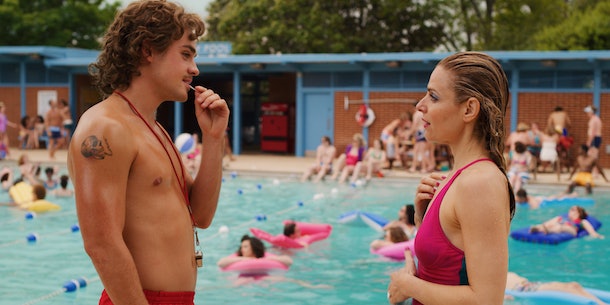 Poor Dacre Montgomery still stuck with that (very on point for 1985) hair. I look forward to his Baywatch-style pool moves, while failing to see the danger coming from the Upside Down. 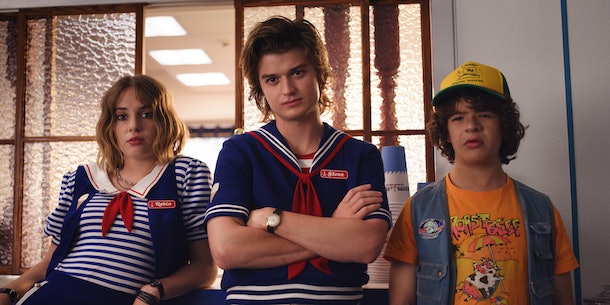 Maya Hawkes’ "alterna girl" character Robin will be part of the Dustin-Steve team up this year. I look forward to her introducing the two of them to Siouxsie and the Banshees and a little unknown group called R.E.M., while they introduce her to the uses of a spiked baseball bat.

The Jopper Romance Is Still On The Table 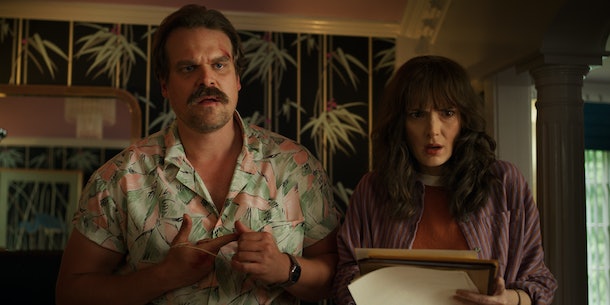 The solid polo shirts are gone, Chief Hopper favors printed button-down Hawaiian style shirts now. (Both he and Eleven are into prints. Wonder who is responsible for that trend?) Joyce, thankfully, is still Joyce, just with a better haircut.

Dustin Has A Surprise 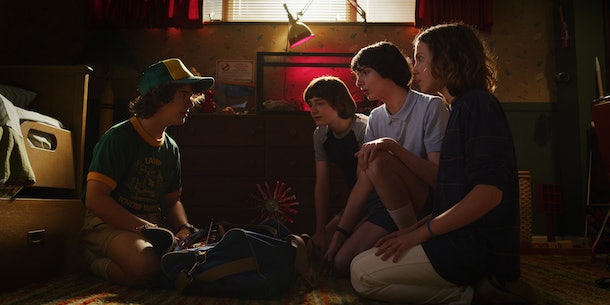 Looking at his shirt, Dustin is just back from "Camp Know Where" and he’s brought a whole lot of electronic goodies back with him. These will be great for the next time his robots start walking by themselves, and it’s not Eleven who is doing it. 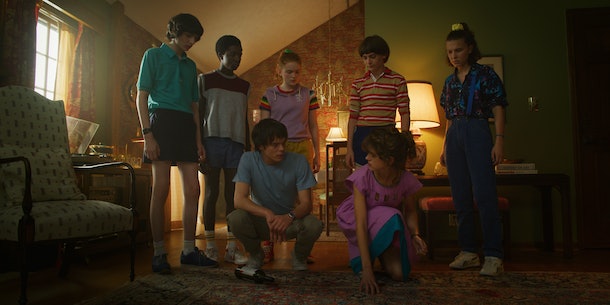 This is the second shot of the group sans Dustin, in the same outfits as the Emergency Room photo above. Dustin could be off at the Ice Cream parlor with Steve, but I for one am worried about his well being until proven otherwise.