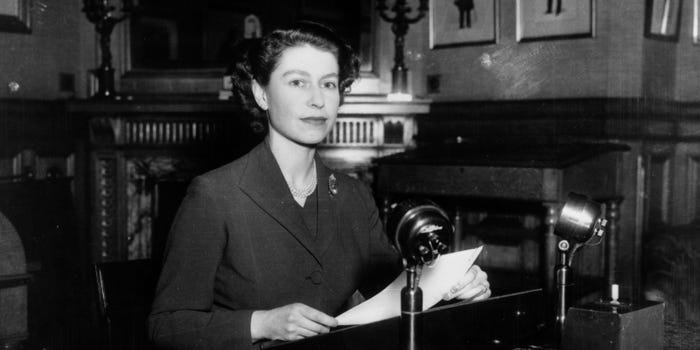 Since 1952, the voice of Queen Elizabeth II has filled the homes of many on Christmas Day as she gives her annual address to the UK.

This year, the 94-year-old royal's Christmas message will be available not only on the BBC, YouTube, and the royal family's official social media accounts — but also via Amazon's virtual assistant, Alexa.

Amazon Echo owners around the world who have the language on their product set to English can tune in to the Queen's address on December 25 at 10 a.m. ET (3 p.m. GMT) by saying: "Alexa, play the Queen's Christmas Day message," according to The Guardian.

According to a statement from Amazon Alexa Europe, the hope is that the Queen's speech being made available via Amazon Echo products will lift spirits and reach new audiences.

"After a challenging year, millions of people from across the Commonwealth will be eagerly awaiting Her Majesty the Queen's message on Christmas Day," Eric King, director of Amazon Alexa Europe, said in a statement. "By creating this world-first innovation, just as we did in 2012 with the release of the Queen's Christmas speech on Kindle, we hope that even more people will be able to enjoy the uplifting words of Her Majesty."

The annual Christmas Day broadcast was started by the Queen's grandfather, King George V, in 1932. The Queen adopted the tradition by giving her first end-of-year speech in 1952 and has addressed the nation every year on Christmas Day with only one exception — in 1969, when a documentary, "Royal Family," aired on TV in place of her address.

In 1957, the Queen gave her first televised Christmas address, which she filmed from her Sandringham Estate.

It's rare that the Queen addresses the nation in formal broadcasts beyond her Christmas Day speech. However, this year, the monarch gave two rare broadcasts.

In April, the Queen gave a historic televised address about the coronavirus pandemic, where she thanked first responders and people staying home amid the pandemic. The same month, she also gave an address in light of Easter, and it was reportedly her first broadcast for the religious holiday.

Christmas for the royal family typically involves ceremonies and celebrations at the Queen's Sandringham estate, but this year, festivities will look different due to the coronavirus pandemic. In fact, it's the first time since 1988 that the Queen will spend the holiday away from Sandringham.

This year, the Queen and Prince Philip will remain at Windsor for Christmas, where they have been isolating since March, a Buckingham Palace spokesperson confirmed to Insider in a statement earlier in December.

"Having considered all the appropriate advice, The Queen and The Duke of Edinburgh have decided that this year they will spend Christmas quietly in Windsor," the palace spokesperson said.

Representatives for Buckingham Palace did not immediately respond to Insider's request for comment.