Lighting the Menorah outside the Tree of Life Synagogue in Pittsburgh took on special significance this year. Just weeks ago, a gunman spewing anti-Semitic comments killed 11 people and injured six others.

Leaders of the three congregations that all worshipped in the Synagogue say they are touched by the makeshift memorial that has sprung up. But the building is still closed, and Rabbi Jeffrey Meyers is not sure when it will reopen.

Correspondent Rita Braver asked, “It’s not just when to come back, it’s how to come back?”

“Precisely,” replied Rabbi Meyers. “And I’m mindful that there may be people who can’t come back.

“And that hurts. Not only are lives taken away, but faith has been taken away.” 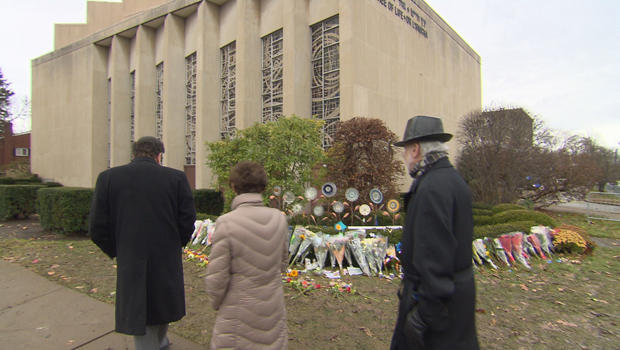 A memorial outside the Tree of Life synagogue in Pittsburgh, where a man armed with an AR-15 rifle and three handguns opened fire in October, killing 11 and wounding six.

For now, services are being held at a neighboring synagogue. And Rabbi Meyers, who witnessed the attack and was able to lead several congregants to safety, is taking it one step at a time.

“I don’t think there’s anything that can mentally prepare a human being to go through what I’ve gone through,” he said.

And for many Jews around the country, what happened in Pittsburgh was a bitter reminder that anti-Semitism is on the upswing.

Both the Anti-Defamation League and the FBI (which calculate statistics differently) have documented an increase in incidents targeting Jews. 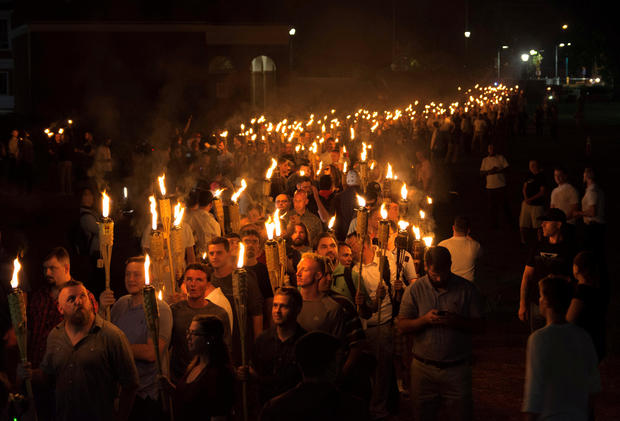 White nationalist demonstrators shout anti-Semitic chants (“Jews will not replace us!”) during a march in Charlottesville, Va., in August 2017, hours before a counter-demonstrator was killed by a far-right protester driving his car into a crowd.

“Anti-Semitism has been rightfully called the longest hatred,” said Deborah Lipstadt, professor of Holocaust studies at Emory University. “I would find its roots in the New Testament, in the story of the death of Jesus.”

That story, which has been much debated and disputed, has been interpreted to say that Jews were complicit in the crucifixion. But Lipstadt says whatever happened then should not be an issue now: 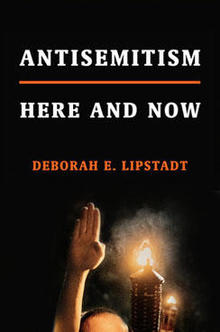 Along with this, there has been a stereotyping of Jews.  “The stereotypes are money, a fixation with money [and] power, that they have smarts in a malicious kind of way, conniving,” Lipstadt said.

Braver spoke with Lipstadt at Shearith Israel synagogue in New York, the oldest congregation in the country, founded by Jews of Spanish and Portuguese descent.

They took a chance and they came here. But from Colonial times on, Jews faced discrimination – barred from some jobs, housing, schools and clubs.

Still, many Jews have succeeded in this country in every sector, and felt safe. Take Jonathan Weisman, deputy editor of The New York Times’ Washington Bureau. Like many American Jews (Braver included), he never really worried about Anti-Semitism. 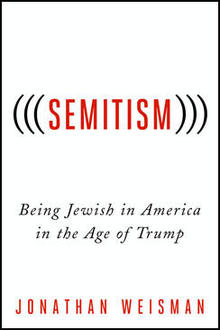 He described himself at one point as being “lulled into complacency.”

“Absolutely,” he said. “I would have never thought that anti-Semitism would be a dominant issue in my life, or a really prevalent issue in American society.”

But that was before the day in 2016 that he tweeted out a short excerpt from a Washington Post piece by writer Robert Kagan that was critical of Donald Trump’s campaign, titled “This is how fascism comes to America.”

“And I got this reply back from somebody calling themselves CyberTrump,” he said. “And CyberTrump just said, ‘Hello, (( Weisman )).’ But Weisman was in these parentheses. I kind of intuited, ‘Weisman’s a Jewish-sounding name. I wonder if this is anti-Semitic.'”

His hunch was correct.  As Weisman notes in his recent book, “(((Semitism))),” those parentheses were a signal to an online mob, and soon he was bombarded with thousands of nasty messages

Many came from people claiming to be Donald Trump supporters. 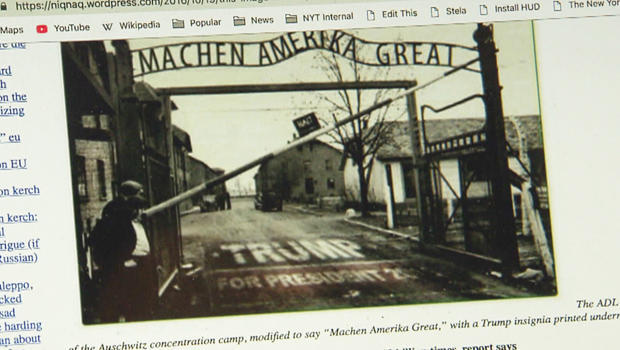 A Photoshopped image of the entrance to a Nazi death camp, posted online by a supporter of presidential candidate Donald Trump.

Braver asked, “There is, as you know still, a lot of debate about whether the president has in any way deliberately encouraged anti-Semitism. Where do you come out on that?”

“I know he has Jewish grandchildren. So, do I believe that he is an overt anti-Semite?” Weisman said. “It’s hard to believe that.  What I do know is, he has had an exceptionally hard time pushing away the anti-Semites and the racists and the white nationalists who have clamored around his movement.”

But others argue President Trump shouldn’t be blamed for any of it.

“I think that it’s also not just partisanship, but also laziness, that it’s easy to peg it on Donald Trump,” said Jewish-American journalist Bethany Mandel. She was also targeted after criticizing candidate Trump, and became so fearful she actually bought a gun. She showed Braver the bullets.

But she disputes the idea that President Trump is *winking* at anti-Semitic followers:

In fact, the alleged Pittsburgh gunman was not a Trump supporter – and the President did condemn the shootings. “This evil, anti-Semitic attack is an assault on all of us,” he said at a campaign rally in Illinois in October.

Said Deborah Lipstadt, “This goes beyond Jews. It starts with Jews, but it doesn’t end with Jews. These are people who hate difference. And that’s a danger. It’s bigger than one group.”

And everyone Braver interviewed agrees that the best way to combat anti-Semitism is to speak out against all forms of bigotry.

But for many Jews, like Rabbi Jeffrey Myers, life will never feel the same.

Braver asked, “What is the new reality as far as you’re concerned?”

“Well, I have 11 beautiful people who are no longer alive. And that’s gonna be with me for the rest of my life,” he replied.

And Lipstadt fears for the future: