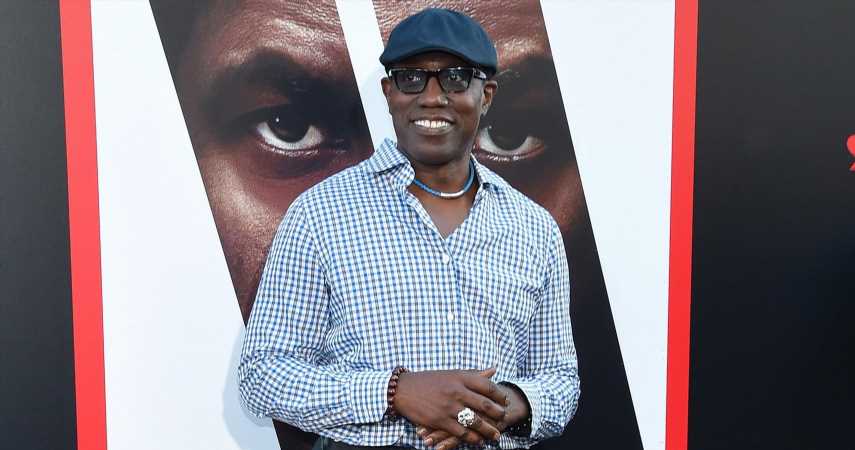 It would be fair to say that the role of vampires, such as Dracula, was that of the antagonist until Wesley Snipes made popular the half-human/half-vampire hybrid, Blade in 1998. Born in Orlando, Florida in 1962, Snipes displayed an interest in the performing arts from an early age, attending the High School of Performing Arts in New York City. At 23, he was discovered by an agent in competition and shortly after made his film debut in Goldie Hawn’s 1986 sports comedy, Wildcats. From there, he has starred in numerous movies, chief of which are New Jack City, Passenger 57, Undisputed, and most recently, Coming To America 2 alongside Arsenio Hall and Eddie Murphy. With a net worth of $10 million, here are 10 of the highest-grossing films starring Wesley Snipes.

Among some of Hollywood’s finest martial artists, such as Jason Statham, Jean Claude Van Damme, and Michael Jai White, you will find Wesley Snipes, who has incorporated many of his own fighting combinations in his movies. In 2014, he shared the stage with a few of these same martial arts actors in The Expendables 3. The movie is the trilogy of a three-part franchise and in this series, Barney Ross (Sylvester Stallone), Lee Christmas (Jason Statham), and Gunner Jensen (Dolph Lundgren) face a former co-founder of The Expendables team who was thought dead – Conrad Stonebanks (Mel Gibson), who is now an arms dealer. Stonebanks swears revenge on The Expendables, and in order to counter his death wish, they must recruit a team of younger, faster, and more technologically sound mercenaries. Snipes is also introduced as one of the original Expendables, Doctor Death. The film grossed $217 million at the worldwide box office.

Still in his prime in 1993, one of the highlights movies of Snipes’ career was his role as the psychopathic criminal Simon Phoenix in Demolition Man. Along the lines of a science fiction action film, he plays the antagonist, opposite from the film’s protagonist, LAPD Sergeant John Spartan, played by Sylvester Stallone. Both the cop and the criminal are convicted and cryogenically frozen in the fictional California Cryo Penitentiary. When Phoenix is thawed in 2032 for a parole hearing, he takes the opportunity to escape police custody. He is now a highly sophisticated and dangerous criminal in a utopian society where not even police resort to violence to detain criminals. In order to capture Phoenix, Zachary Lamb (Bill Cobbs) suggests thawing Sergeant John Spartan, as he is best equipped to re-capture Phoenix. Other casts in the movie include Sandra Bullock and Rob Schneider. In total, the film grossed a cool $159 million at the box office.

Another one of Wesley Snipes’ most successful and memorable projects was the Blade trilogy. Based on the Marvel Comic character, Blade 2 follows the half-man half-vampire hybrid who rescues his mentor and partner, Whistler (Kris Kristofferson) who is thought dead after being bitten by a vampire. However, Blade heals him and he is introduced to Scud (Norman Reedus), his new technician in Whistler’s absence. After the spread of a highly-infectious pandemic that turns the vampire race into “Reapers” and quickly transforms humans, Blade must reluctantly work with The Bloodpack, a vampire group once trained to kill him. The Reapers is headed by Jared Nomak (Luke Goss), who turned out to be the son of Eli Damaskinos, the leader of The Bloodpack. It is then revealed that Damaskinos attempted to create a superior breed of vampires, resulting in Nomak. Riddled with betrayal and revenge, Blade 2 grossed $154.3 million at the box office.

Released in 2004 as the last of the Blade Trilogy films, Blade Trinity continues to follow the story of the Daywalker vampire hybrid, Blade (Wesley Snipes). In this movie series, a group of vampire archeologists uncovers an ancient tomb in the Syrian Desert belonging to Dracula, or Drake (Dominic Purcell), the original vampire. Simultaneously, Whitler is killed in an FBI raid, and Blade is framed and arrested for the death of a human familiar. Hannibal King (Ryan Reynold) and Abigail Whistler (Jessica Biel) rescue him from their clutches. Blade realizes that Abigail is the daughter of the now-deceased Whistler, and she followed his path to fight against the vampires. Danica Talos (Parker Posey) has resurrected Drake with the intent of using his powers to cure the vampires of their weaknesses, making them an even greater threat. Blade, Hannibal King, and Abigail must now deactivate the human-blood harvesting plants and stop the vampires’ plan to grow stronger from Drake’s powers. The trilogy was a commercial success, grossing $131.3 million worldwide.

The original Blade film of 1998 reveals Blade’s backstory and why he chose the less-trodden path of a vampire hunter, being part-vampire himself. The film explains how Blade’s mother, Vanessa Brooks (Sanaa Lathan) was attacked and bitten by a vampire when she is pregnant with Blade. He survives the pregnancy, but his mother contracts an infection and dies. After thirty years, the child becomes Blade, a vampire hunter seeking the heads of those who bit his mother and, by default, cursed him with supernatural vampire powers. His prime target is Deacon Frost (Stephen Dorff), who has infected a hematologist named Karen Jenson (N’Bushe Wright) with a bite. However, Blade takes her to be cured by Whistler. Frost is seeking Blade’s blood to summon an evil vampire god named La Magra. Later in the movie, Blade learns that his mother is still alive and has willingly become a vampire. He then proceeds to kill her, along with Frost’s faction of vampires. As the first film of the franchise, Blade grossed the least with $131.2 million.

In 1992, Snipes showed a more humorous side of his acting acumen in the sports comedy film, White Men Can’t Jump. The movie remains a classic to this day, as it touches on controversial topics such as racial stereotypes and interracial relationships. It follows Billy Hoyle (Woody Harrelson), a former college basketball player who is assumed as inept on the basketball court because he is white. He uses this to his advantage and makes his living by hustling streetballers, while his wife, Gloria Clemente (Rosie Perez), studies incessantly to be on the Jeopardy! show and win the grand prize. However, they are being chased by mobsters for failure to pay a gambling debt. Billy meets Sidney Deane (Wesley Snipes) and they begin a business partnership where they hustle ballers together. The film saw both actors still in their prime and grossed $90.7 million at the box office.

Although a legitimate action star, Snipes isn’t above a good romantic flick. In fact, he’s been in quite a few, beginning with Spike Lee’s Jungle Fever in 1991, as well as Disappearing Acts starring Sanaa Lathan in 2000, and One Night Stand starring Robert Downey Jr. and Ming-Na Wen. In the 1995 romance film, Waiting To Exhale adapted from a 1992 novel by Terry McMillan, four girlfriends, namely Savannah (Whitney Houston), Bernadine (Angela Basset), Robin (Lela Rochon), and Gloria (Loretta Devine) comfort each other with their friendship as some look for love and experience heartbreak from current relationships. Savannah is in love with a married man named Kenneth Dawkins (Dennis Haysbert); Bernadine’s husband; John (Michael Beach) leaves divorces her for a white woman he works with; Robin has trouble finding a lover, and Gloria finds love in a new neighbor, Marvin King (Gregory Hines). Wesley Snipes plays James Wheeler, a civil rights attorney who shared a brief intimate moment with Bernadine. Full of drama yet supported by a stellar cast, the film grossed $81.4 million at the box office.

When two foster brothers, John Robinson (Wesley Snipes) and Charlie Robinson (Woody Harrelson), patrol the New York City subway as transit cops, they learn from the obnoxious transit captain Donald Patterson (Robert Blake) after chasing two muggers into a subway tunnel that under no circumstances must the money train stop, even if other trains en route are stopped. Charlie owes $15,000 in gambling debts to a mobster named Mr. Brown (Scott Sowers), who promises he will have to pay with his life if the money doesn’t show. John rescues him and promises to pay up. Then Gracie Santiago (Jennifer Lopez) is introduced to the team and is almost burned alive while undercover by a serial killer known as Torch (Chris Cooper). Charlie has feelings for Gracie, but she instead falls for John. Charlie, frustrated with every area of his life, and the fact that he lost the $15,000 John gave him to pay off the mobster, decides to rob the money train on New Years’ Eve as it would be carrying up to $4 million. John tries to convince him to flee. They narrowly escape Captain Patterson, but Charlie still manages to snatch a bag with $500,000. The film was harshly critiqued but grossed $77.2 million.

In one of the most unlikely pairings of his career, Snipes co-starred with Sean Connery in the 1993 buddy cop crime thriller, Rising Sun. The film was based on a novel written by screenwriter and author, Michael Crichton., with the same name. The movie surrounds the lives of Los Angeles police detectives Captain John Connor and Lt. Webster Smith, who are called up to investigate the murder of Cheryl Lynn (Tatjana Patitz). They suspect her boyfriend, Eddie Sakamura (Cary-Hiroyuki Tagawa). But then film expert Jingo Asakuma (Tia Carrere) discovers that the footage was manipulated to implicate Sakamura. The rabbit trail goes even deeper when the footage reveals that Senator John Morton (Ray Wise) had sexual encounters with Cheryl, and performed erotic asphyxiation on her, but she didn’t die. After the Senator left, someone else came and killed her. An American lawyer named Bob Richmond (Kevin Anderson) reveals himself as the true killer. However, it is believed that Richmond may have taken the fall to protect someone more prominent. The film received mixed reviews but ultimately grossed $63.09 million against a $40 million budget.

Throughout the entirety of his career, Wesley Snipes has experienced both the highs and lows that come with celebrity life. As part of his resume, he can boast of working with some of Hollywood’s most iconic figures, such as Christopher Walken, Sylvester Stallone, Laurence Fishburne, Jason Statham, Eddie Murphy, Patrick Swayze, and Tommy Lee Jones. The latter co-starred in U.S. Marshals, a 1998 action crime thriller. The film surrounds Mark Sheridan (Wesley Snipes), a federal fugitive wanted for homicide, who is captured under a fake name, Mark Roberts. He is accompanied by U.S Marshal Sam Gerard on a prisoner transport airplane, which crashes after a Chinese assassin tries to kill him. He is the prime suspect in surveillance footage showing a briefcase exchange-turned deadly. Gerard soon realizes that another agent named John Royce (Robert Downey Jr.) can’t be trusted and is trying to kill Sheridan to silence him. Royce is unsuccessful in his attempt, as Gerard kills him first. Snipes is legendary for playing rogue CIA agents, and this one grossed $57.8 million globally.

READ NEXT: Wesley Snipes Is Back To The Grind With Netflix’s Limited Series ‘True Story’