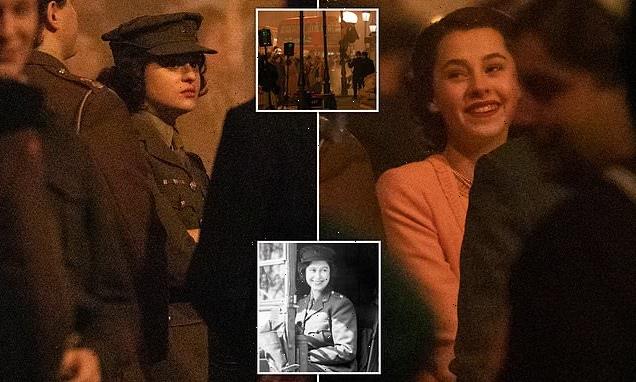 Oh what a night! Evening teenage Princess Elizabeth and Princess Margaret crept out of Buckingham Palace to join London’s VE Day celebrations is recreated in Hull for series 6 of The Crown

A rare night of freedrom for the young Princess Elizabeth has been recreated for The Crown – with actors spotted filming a re-enactment of the night the late monarch and her sister Princess Margaret escaped Buckingham Palace to join VE Day celebrations.

The young princesses’ historic night on the town will be documented in the hit Netflix’s drama last season – which is expected to air in late 2023.

The royal sisters have been recast for the fourth time in the show’s four-year history – with Viola Prettejohn, 18, stepping into the role of the late Queen while Beau Gadsdon, 14, takes on Princess Margaret.

Glimpses from the set in Hull show the sisters – who were just 19 and 14-years-old when WWII ended on May 8, 1945 – immersing themselves in the crowds while celebrating soldiers scale lamp posts and wave Union Jacks.

While The Queen famously wore her junior commander uniform for the evening out with her sister and cousin Margaret Rhodes, Princess Margaret appears in a salmon pink dress and pearl necklace for the heartwarming scenes. 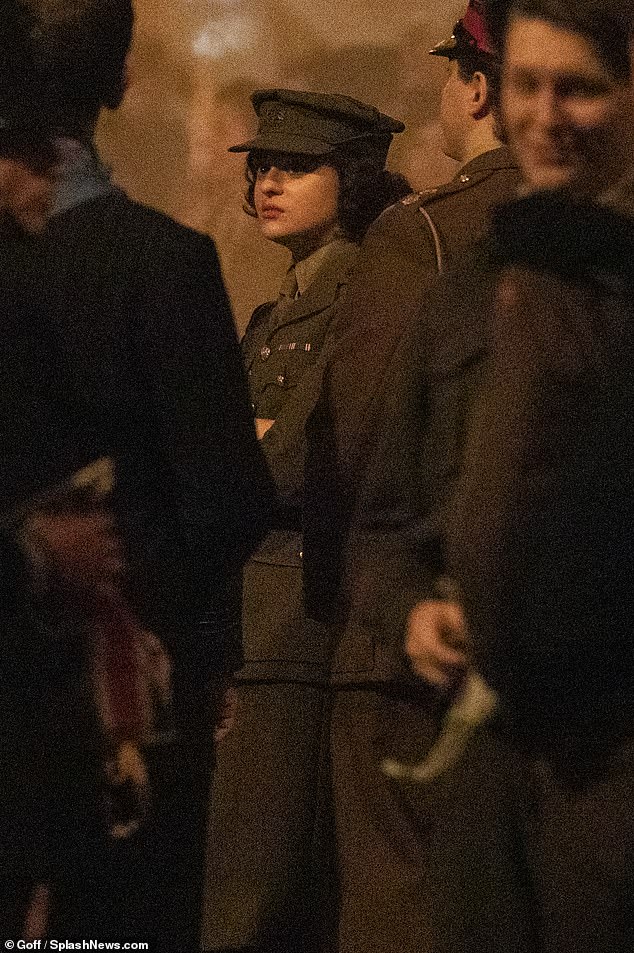 Viola Prettejohn, 18,has been cast as a young Princess Elizabeth in season six of The Crown. The actress – pictured filming in Hull – is best known for playing Fake Ciri in The Witcher 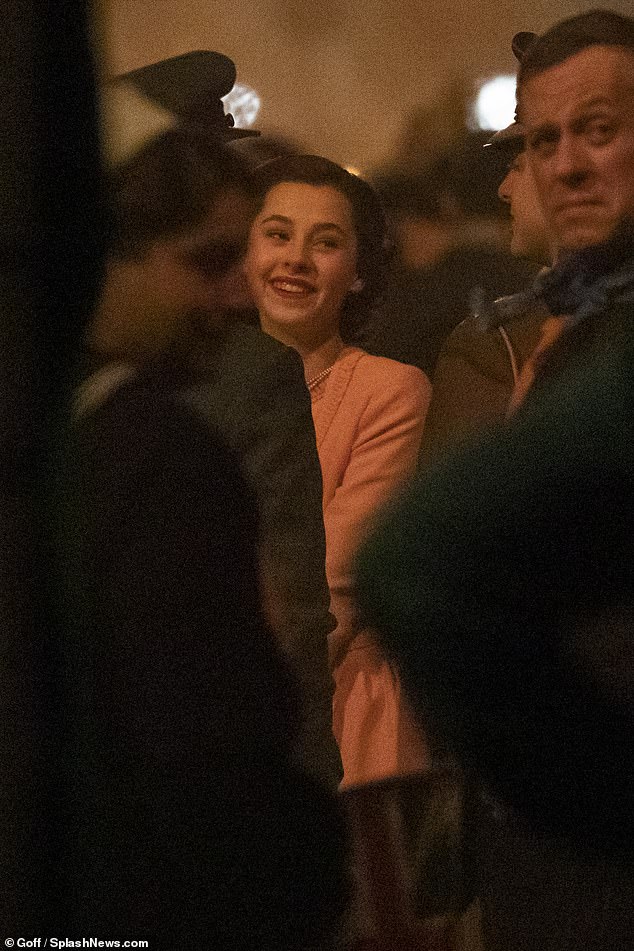 Beau Gadsdon, 14, has been cast as Princess Margaret in the flashback scene in The Crown season six. The actress – pictured filming in Hull – has previously starred in Netflix’s The Crown 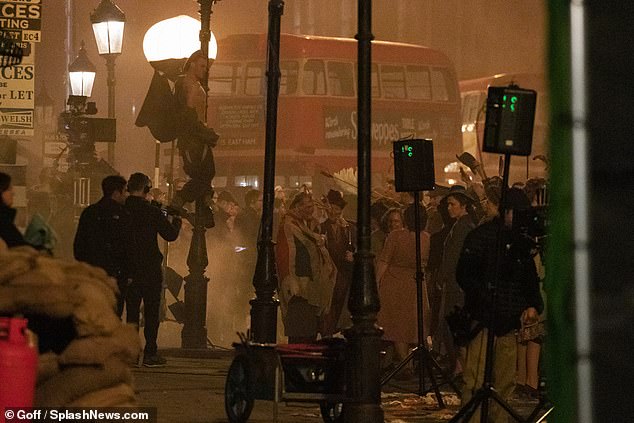 The royal sisters famously snuck out of Buckingham Palace on May 8, 1945 to celebrate the end of WWII with the crowds. Pictured: Netflix’s recreation of 1940s London 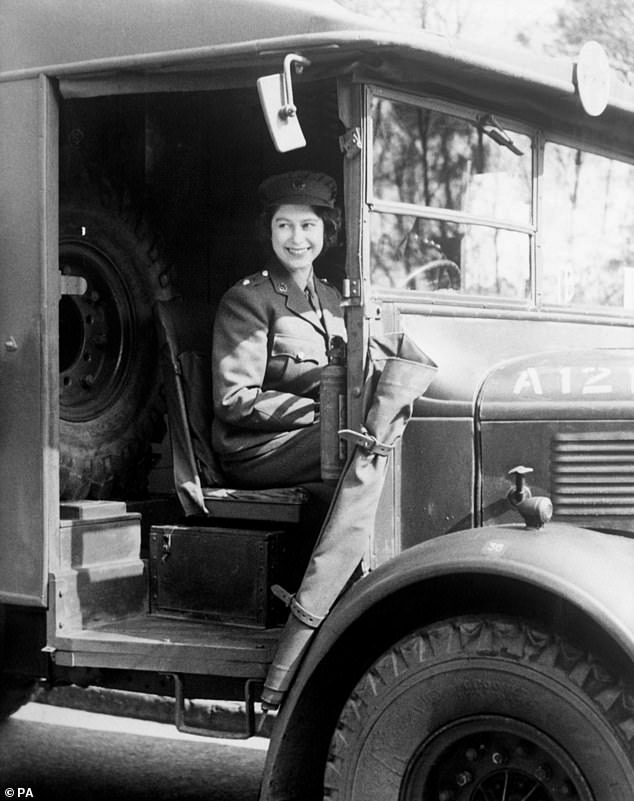 Princess Elizabeth served as a junior commander in the Auxiliary Territorial Service during WWII. Pictured at the wheel of an army vehicle in 1945

As well as chatting to soldiers, the sisters are seen warming their hands over a bonfire in Netflix’s recreation of central London and singing along to chants from crowds.

On the 70th anniversary of VE Day in 2015, Princess Margaret told Channel 4 that the royal party was granted permission by the King to go and join the celebrations.

Margaret, Elizabeth and their cousin slipped through the Buckingham Palace gates at 9pm along with the future Queen’s lady-in-waiting Jean Woodroffe – who was 22 at the time.

The group also included Lord Porchester, later to become the Queen’s racing manager, and Peter Townsend, the king’s equerry who caused a national crisis a decade later when, as a divorcé, he won the heart of Princess Margaret. 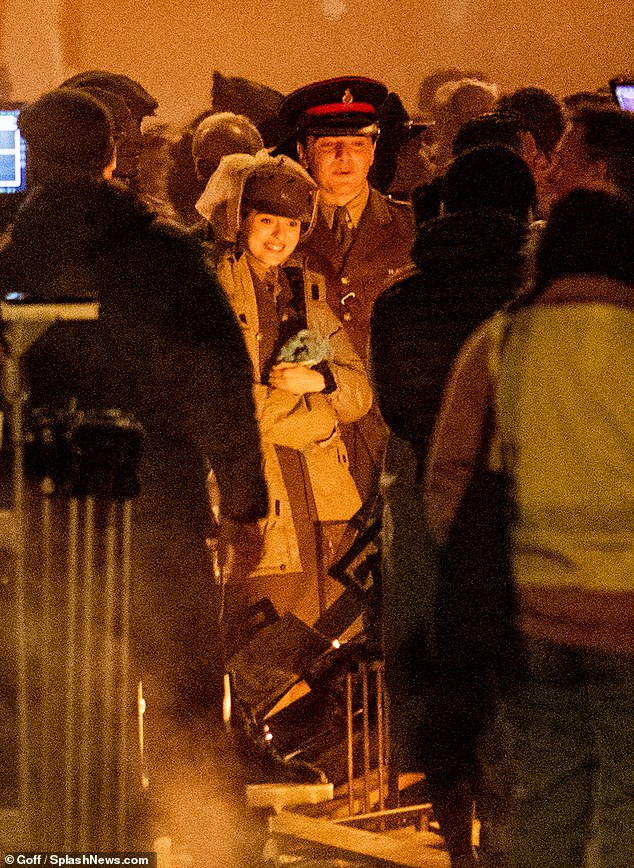 The Queen revealed in 1985 that she tried to cover her face with a hat to avoid being recognised by crowds in London. Viola pictured wearing the uniform of the Auxiliary Territorial Service 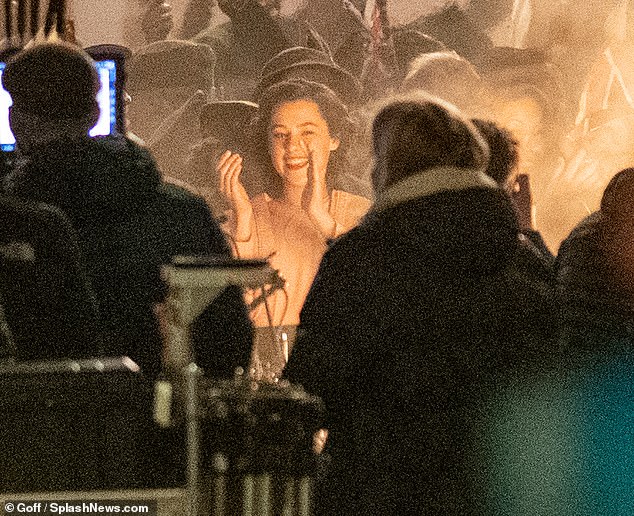 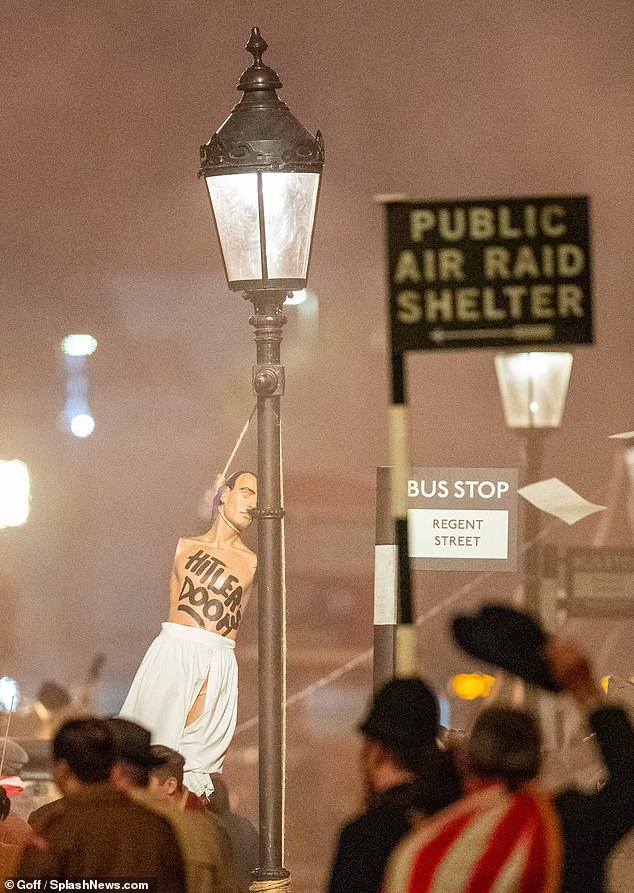 A Hitler doll dangles from a lampost in Netflix’s recreation of 1940s London. 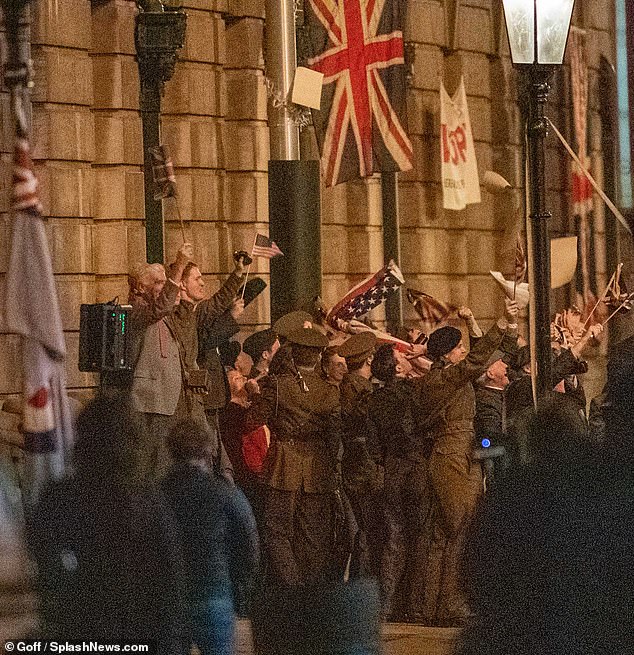 Reflecting on their evening out, Margaret said she ‘loved the freedom’ of ‘being an ordinary person’ – if only for a few hours.

Speaking to the BBC on the 40th anniversary of the historic occasion, the Queen said: ‘I think it was one of the most memorable nights of my life.

‘We were terrified of being recognised, so I pulled my uniform cap well down over my eyes.’

However, Her Majesty – who served as a junior commander in the Auxiliary Territorial Service from 1944-1945 – was then called up on the state of her uniform by an unknowing Grenadier officer. 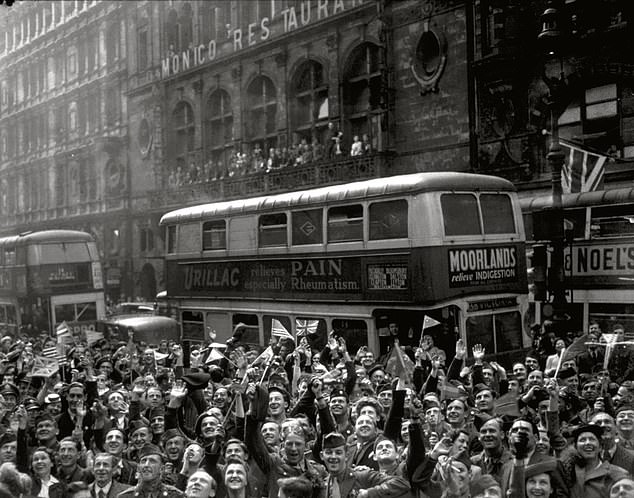 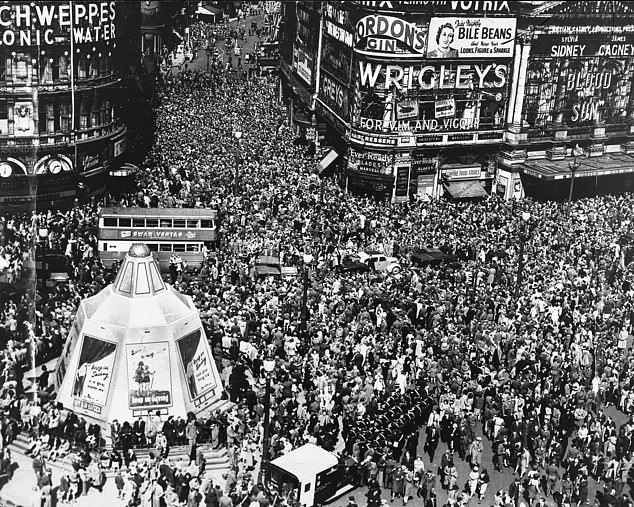 Crowds bring traffic to a standstill in Piccadilly Circus on May 8, 1945 with the boarded-up statue of Eros at its heart 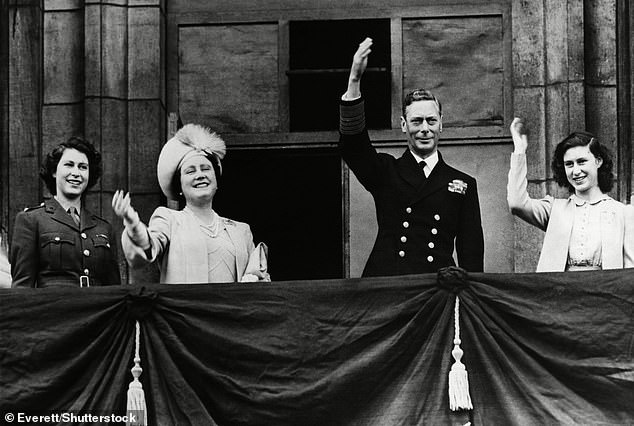 Princess Elizabeth and Princess Margaret were given permission by their parents to join the celebrating crowds on VE Day. Pictured on the Buckingham Palace balcony earlier in the day 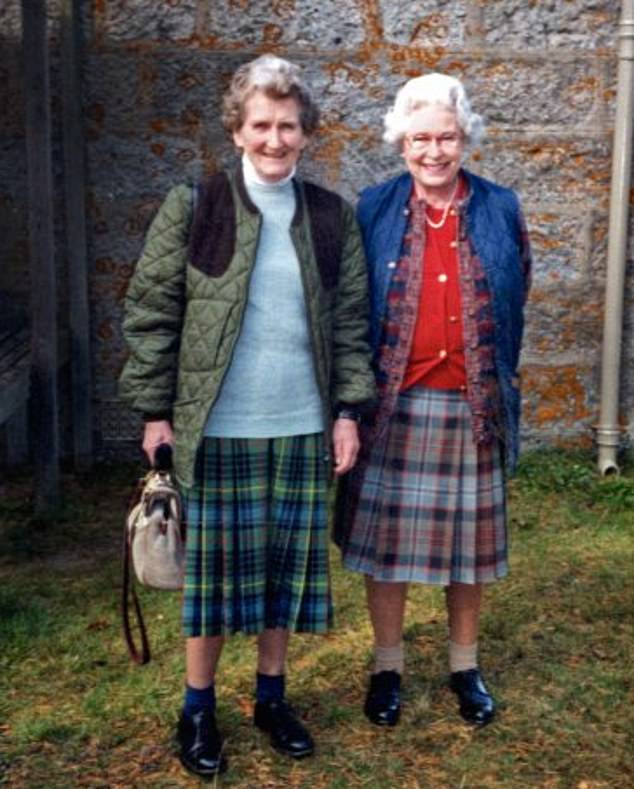 With the princesses on their outing was the Queen’s cousin, the Hon Margaret Rhodes, 19, daughter of the Queen Mother’s elder sister Mary. She was just under a year older than the Queen, and the pair (pictured) remained friends until Margaret died in 2016, aged 91

She continued: ‘A Grenadier officer among our party of about 16 people said he refused to be seen in the company of another officer improperly dressed, so I had to put my cap on normally.’

At 10pm, the royal party moved down The Mall before heading to Whitehall.

The Queen continued: ‘I remember lines of unknown people linking arms and walking down Whitehall, all of us just swept along on a tide of happiness and relief.

‘I also remember when someone exchanged hats with a Dutch sailor; the poor man coming along with us in order to get his hat back.’

By 10:30pm, they had reached Trafalgar Square, which Margaret Rhodes told BBC documentary makers was ‘jammed’.

Describing the scene, she said: ‘It was a scene of joyful whoopee – full of people kissing policemen and other people. It was complete mayhem but rather nice mayhem.’ 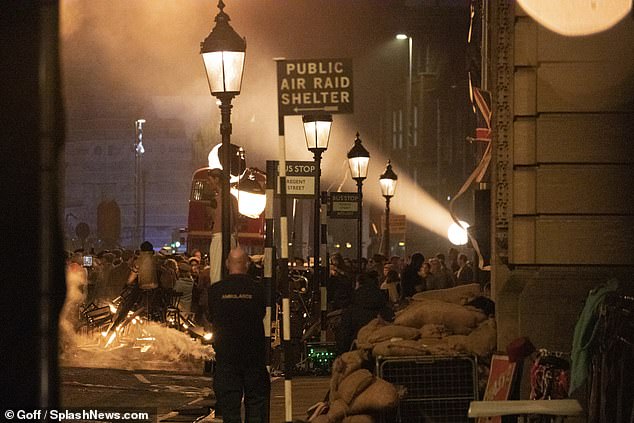 Netflix has recreated 1940s London in Hull, East Yorkshire. A glimpse of the set shows sandbags lining the streets as war is declared over 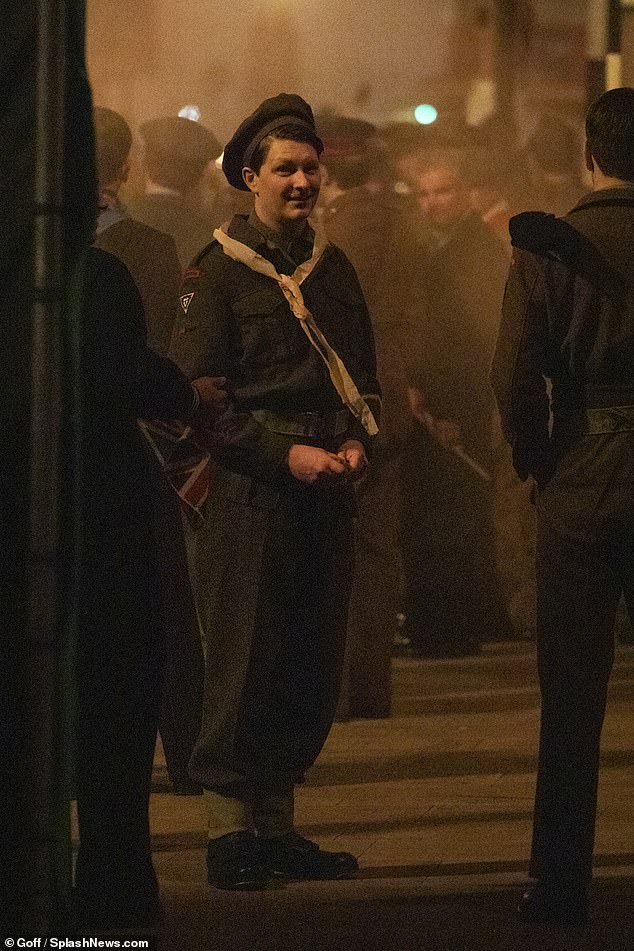 The final season of The Crown will revisit Elizabeth and Margaret’s VE celebrations as they went unrecognised by members of the public. Pictured: an extra on the set of The Crown 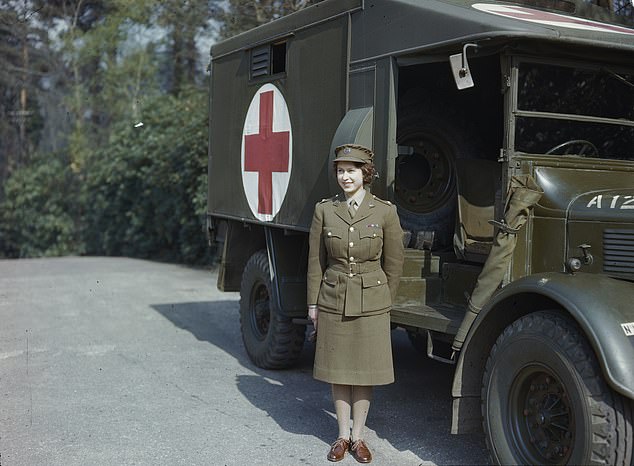 Princess Elizabeth in her Auxiliary Territorial Service uniform in front of an Army ambulance during the second world war in 1945.

An hour later, the group decided to take their celebrations to The Ritz and stunned ‘stuffy’ guests with their partying.

Margaret Rhodes recalled: ‘For some reason, we decided to go in the front door of the Ritz and do the conga. The Ritz was so stuffy and formal – we rather electrified the stuffy individuals inside.

‘I don’t think people realised who was among the party – I think they thought it was just a group of drunk young people. I remember old ladies looking faintly shocked. As one congaed through, eyebrows were raised.’

However, the young women still managed to keep their promise of making it back to the Palace by midnight – even though they failed to sneak back in unrecognised.

‘We were successful in seeing my parents on the balcony, having cheated slightly by sending a message into the house, to say we were waiting outside,’ The Queen admitted in 1985.

Before being cast as a young Princess Elizabeth, Viola Prettejohn has previously starred in Netlflix’s The Witcher while her co-star Beau Gadsdon is most famous for playing Katherine Ryan’s on-screen daughter in The Duchess.

It has been confirmed that the final season of The Crown will dramatise Princess Diana’s final months and her death in a tragic car crash in Paris in 1997 as well as featuring this Queen Elizabeth flashback scene.