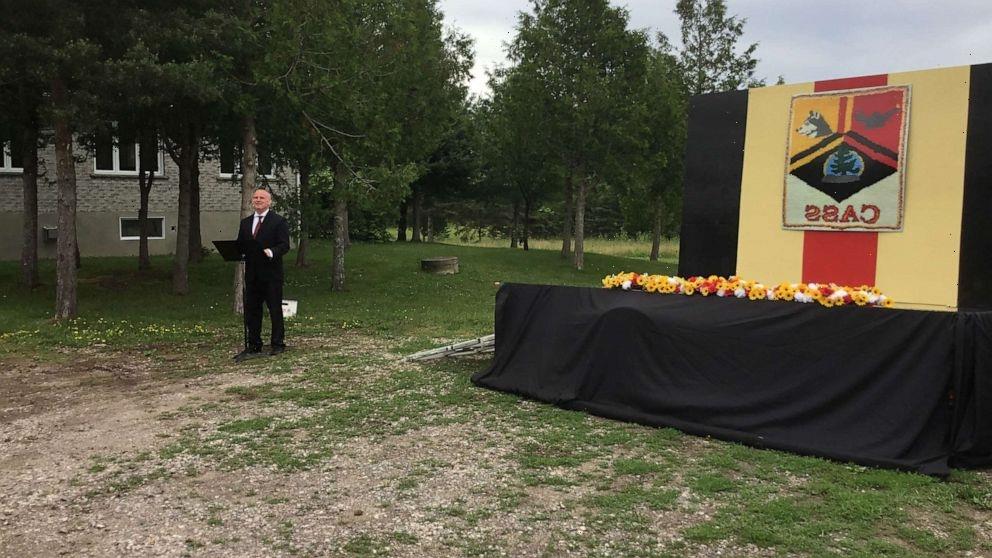 One teacher went above and beyond the call of duty for his students.

Ray Growlett, 48, from Richards Landing, Canada, is no stranger to going the extra mile. So when COVID-19 restrictions prevented Central Algoma Secondary School — where he works as a physical education teacher — from having an in-person ceremony for its graduating seniors, naturally, he stepped in.

“It’s such an important right of passage for so many people,” Growlett told “Good Morning America.”

After a year and a half of constant bad news and having so much taken away from them, Growlett wanted to give something back to the students. He built a mobile graduation stage that could be driven from home to home so they could walk across it to receive their diplomas.

“It was almost like the first win that we’ve had in a year and a half after being beaten down — just bad news after bad news,” he said. “We finally get to do this one that we’ll remember for the rest of our lives and is super cool and super unique.”

The idea stemmed from a conversation with his daughter Sadie. The school was allowing teachers to hand deliver diplomas to students at home, and Sadie asked her dad if he could give her hers, as well as a friend’s, at a nearby outdoor stage.

Teen managing homelessness, diabetes gets accepted to more than 50 schools

Not wanting to break any health and safety rules, Growlett came up with a unique solution.

“I thought, well, what if I built a stage and I went to every person’s house so they would have the opportunity to walk across the stage?” he said.

Growlett then got to work on a proof of concept so he could pitch the idea to the school’s graduation committee. Within two days, he built the stage using a trailer and pallets, and the committee was immediately on board.

“Nobody hesitated even for a second,” Growlett said. “They were like, ‘Yeah, let’s do it. This is awesome.’ It was absolutely incredible.”

A week and a half later, Growlett spent all of June 26 and 27 driving nearly 250 miles to the homes of 72 students so they could walk across the stage and get their diplomas.

According to Growlett, it was a coordinated effort between himself and the school. There was a scheduled route for both days, and on the day of, a lead vehicle would alert the families that Growlett was on his way to them with the stage.

Once he showed up, Growlett and other school staff would set up the stage, the student would have ample time to get their diploma and take photos, and then they’d pack up and repeat.

“There was no rush to it,” Krissie Lamoureux, a parent of a mobile grad, told “GMA.” “They made sure everybody was able to get up and have their photo taken with them. They allowed them to have their little bit of glory, which was important.”

Lamoureux, whose son Joël received his diploma on the Saturday, said the mobile stage made the graduation even more special.

“It was extremely personal,” she said. “It’s really hard as a parent to watch your child graduate from a distance and not be able to really be a part of anything.”

Things like this are just par for the course for Growlett, Lamoureux added.

“During COVID, he helped set up different videos and TikToks for the kids to see so they didn’t feel so alone,” she said. “He was very keen on everybody staying physically active in order to not fall into any type of depression. So he really wanted the kids to stay focused and he put out there: ‘I’m available to talk any time.'”

In addition to being a physical education teacher, Growlett was on the wrestling team in college and is now a mixed martial arts fighter, but still said the weekend took a lot of out of him.

“It was a workout,” Growlett said. “I would have to deadlift the trailer on and off the truck every single time we stopped.”

In the end, however, it was all worth it.

“I don’t think I’ve been a part of anything like that before in my life,” he said. “Every family was just so excited — they were so grateful that they had a stage to walk across. It was so meaningful.”