Socialite Talita von Furstenburg might not yet be a household name like her celebrated designer grandmother Diane, but she is certainly well on her way.

The talented 20-year-old has already released two capsule collections for her own ‘TVF’ clothing line, which is sold as part of the DVF brand, and currently has a TVF pop-up within the DVF flagship store in London.

She is also being groomed to one day take over the brand itself, with Diane telling the Evening Standard this week that she is ‘only keeping the company because she is going to take it over’.

With such expectations weighing on her shoulders, it is perhaps of little surprise Talita admits to feeling some ‘pressure’ to fill her grandmother’s enormous shoes – and honour a family name that ‘goes back thousands of years’.

However, the socialite is clearly enjoying some benefits of winning what she describes the ‘ovarian lottery’ – and regularly shares snaps of her sun-soaked holidays and designer wardrobe on Instagram, where she boasts 207,000 followers.

Here, a closer look at the glittering life of the future fashion mogul… 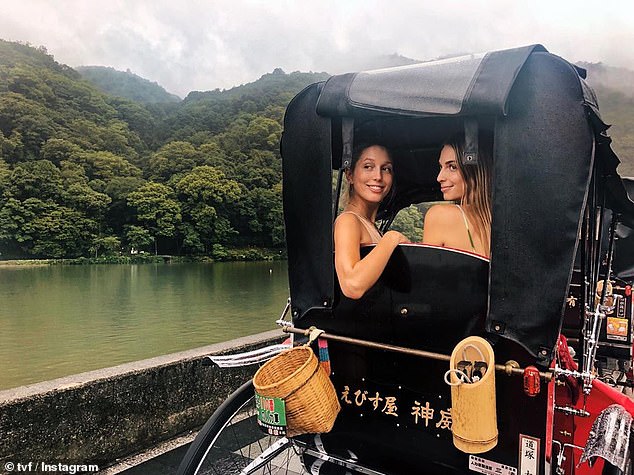 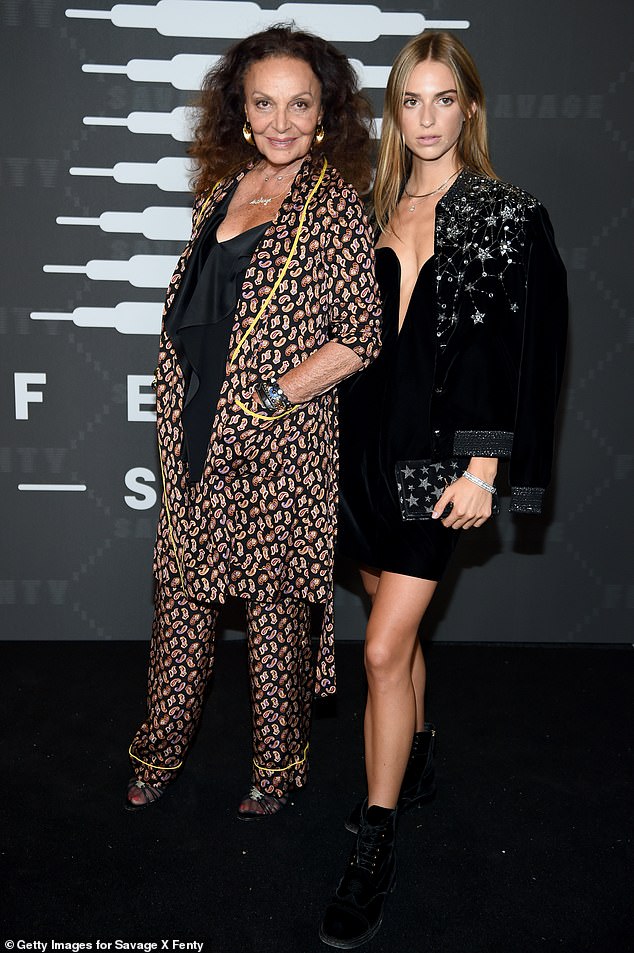 Talita is being primed to take over DVF from its founder, her grandmother Diane von Furstenberg. Pictured, the grandmother and granddaughter at a NYFW event in September

The socialite also said her grandmother was ‘always supportive’ to her after her parent’s divorce, and sometimes phoned her up to five times a day to check up on her.

Talita went on to acknowledge she was in a position of privilege, saying: ‘The family name goes back thousands of years. I won the ovarian lottery.’

But she suggested that carrying on her grandmother’s legacy came with a certain amount of expectation, saying: ‘It definitely feels like pressure.

‘That’s why I wanted to start working as soon as I could. So I can use that name for good.’

Diane isn’t her only famous relative, with her cousin and best friend Olympia often making an appearance on her Instagram.

Olympia is the daughter of Alexandra’s sister, Marie-Chantal, Crown Princess of Greece, and husband Pavlos, Crown Prince of Greece.

The two cousins appear to be quite close, regularly vacationing together in Harbour Island in the Bahamas with their families. 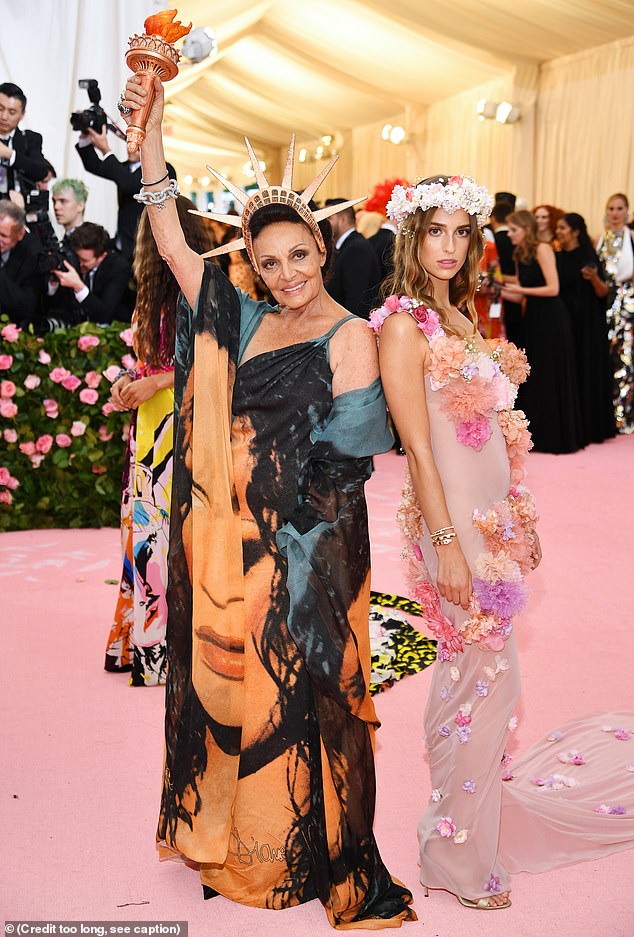 Meanwhile the heiress often makes time to attend exclusive events friends and family, having attended the Met Ball for the past three years with her grandmother Diane (pictured left)

As well as her luxury holidays and stylish getaways, Talita also manages to squeeze in time to enjoy exclusive events.

She attended her first Met Gala in May 2017 alongside her grandmother, and has attended every year since.

In May 2019, she joined her grandmother on the red carpet at the exclusive event for the third time, posing in a floral embellished gown. 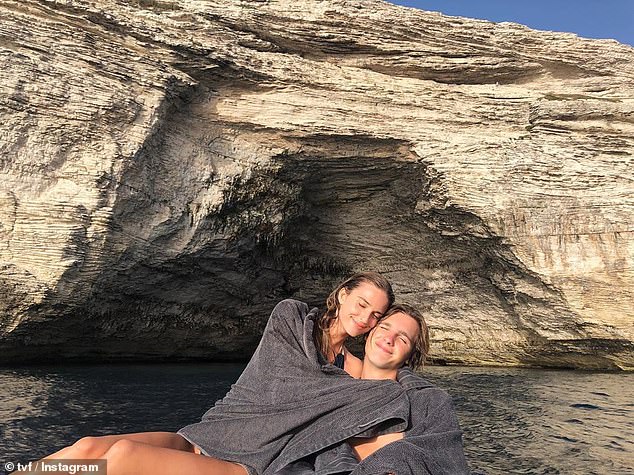 The heiress is often seeing jetting around the world with her longterm boyfriend Rocco (pictured left), and best friend and cousin Princess Olympia of Greece 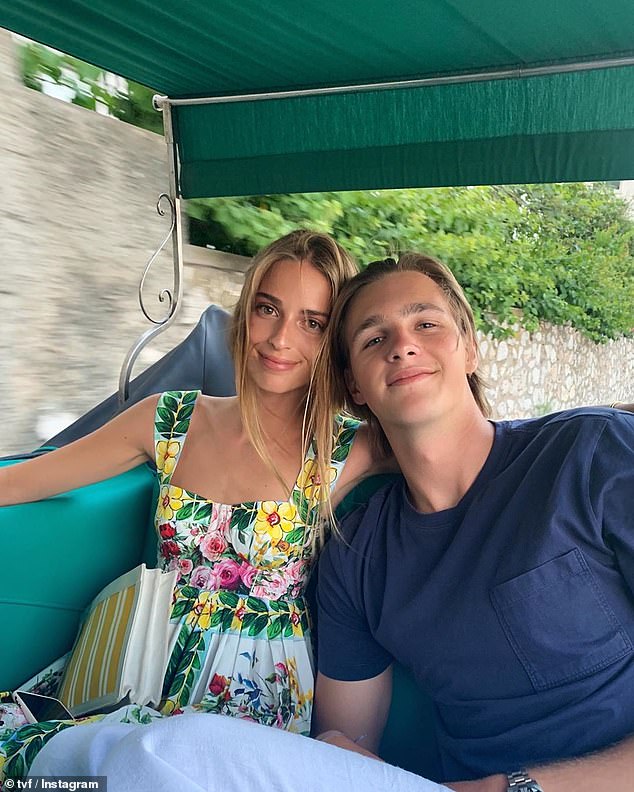 Talita is often seen holidaying with her hunky boyfriend Rocco Brignone, 19, whom she fell in love with while vacationing with their family last year 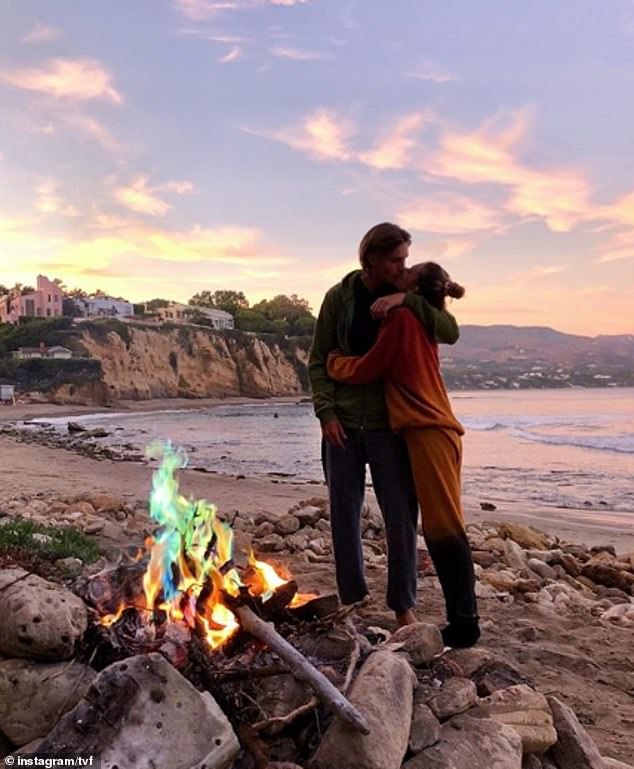 A regular on Talita’s glamorous getaways is her hunky boyfriend Rocco Brignone, 19, who comes from an Italian banking family that owns and runs the Costa Careyes private estate resort in Costalegre, Mexico.

The couple have been family friends for years, after their parents attended Brown University together.

Talita has spoken about their romance in the past, suggesting they fell in love during a trip with their families to the Bahamas in 2018.

Now Rocco often appears on Talita’s adventures around the world, joining her in Italy, Greece and Mexico 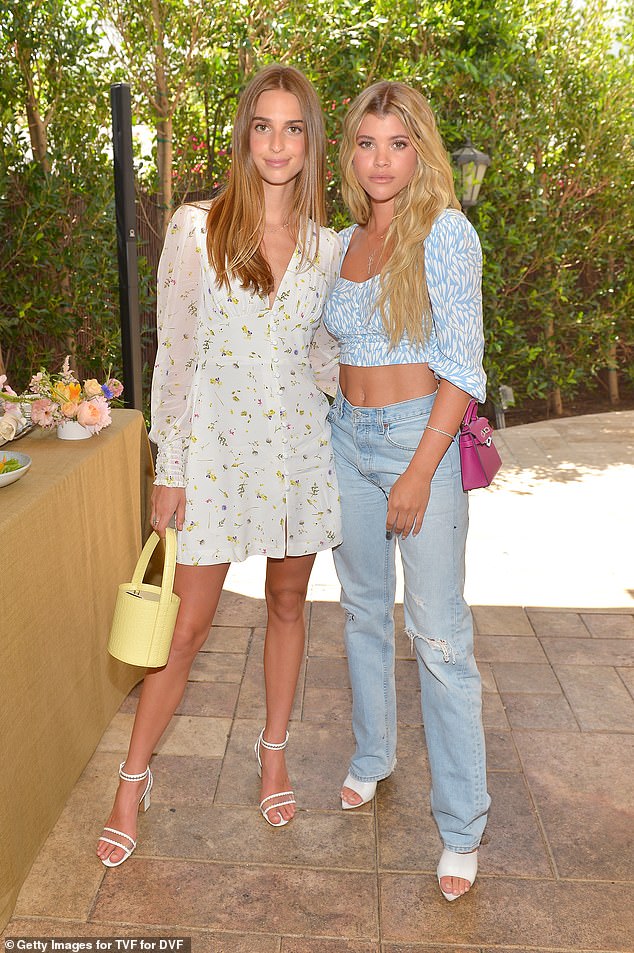 Alongiside her glamorous family, Talita has a whole host of famous friends. Pictured with Sofia Richie at the launch of her first collection for DVF in April

Alongside her fabulous family, Talita has a whole cohort of famous friends who she is often snapped at events yet.

Starlets including Whitney Port,  Madison Beer and Kris Jenner were all spotted at the launch of her first collection for her grandmother’s DVF brand back in April.

Meanwhile models Sofia Richie and Elle Macpherson are amoung those she counts within her close circle, as well as her cousin Olympia, who she is often snapped holidaying with. 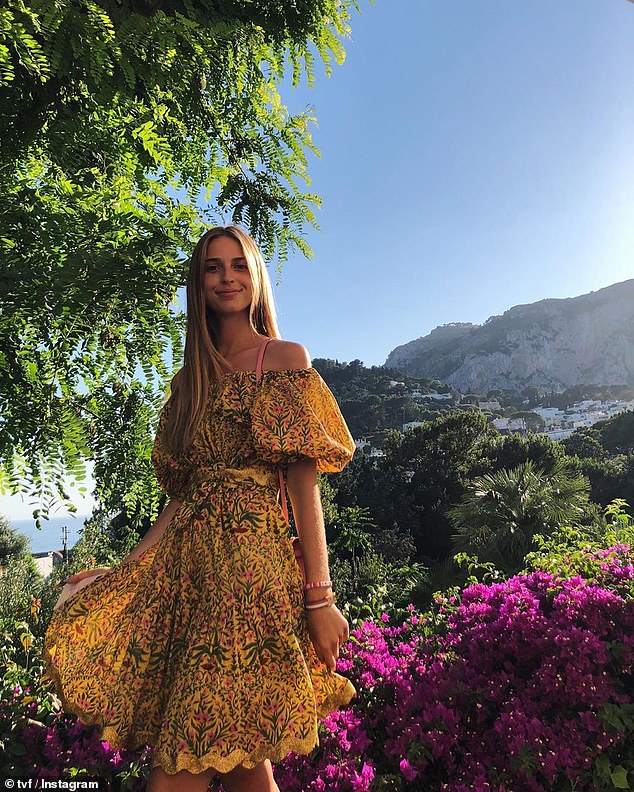 Socialite Talita von Furstenberg, 20, revealed she feels she ‘won the ovarian lottery’ and acknowledged her privilege as she opened up in a revealing interview 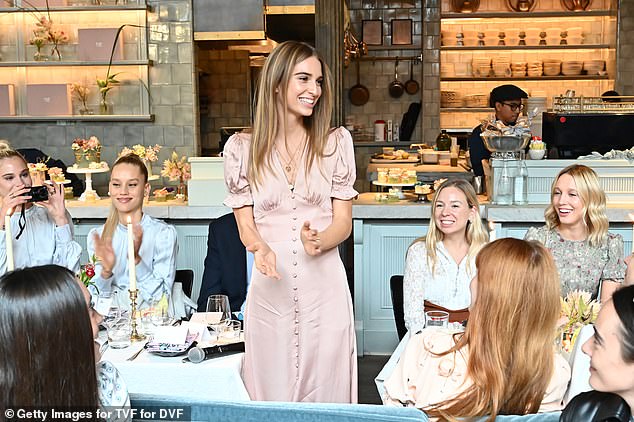 But as heiress to the iconic DVF brand, Talita acknowledged she felt a ‘pressure’ when it came to continuing her grandmother’s legacy.

But she also suggested she had big plans for the company, revealing that her style is likely to be different from Diane’s.

She suggested her friends tended to be more casually dressed, wearing trousers and trainers, as well as pretty dresses.

She said: ‘My generation works in more relaxed settings.’ 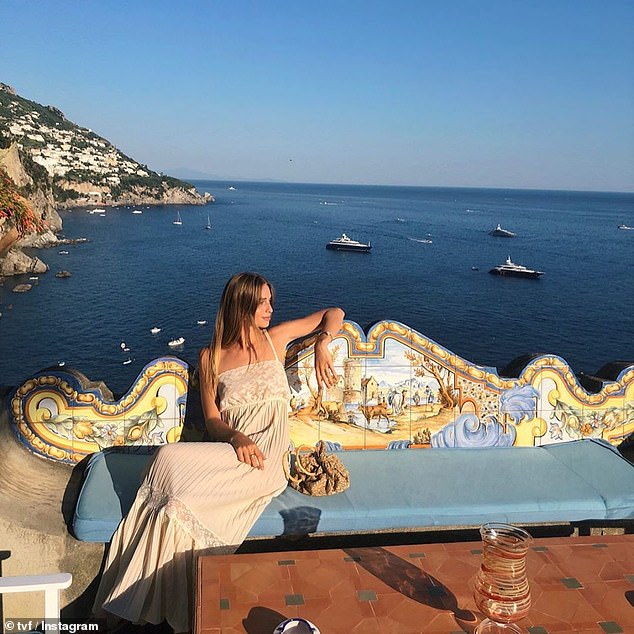 Talita’s Instagram is packed with snaps from her glamorous holidays around the world, including trips to Capris, Mexico and Japan (pictured, in Italy in the summer) 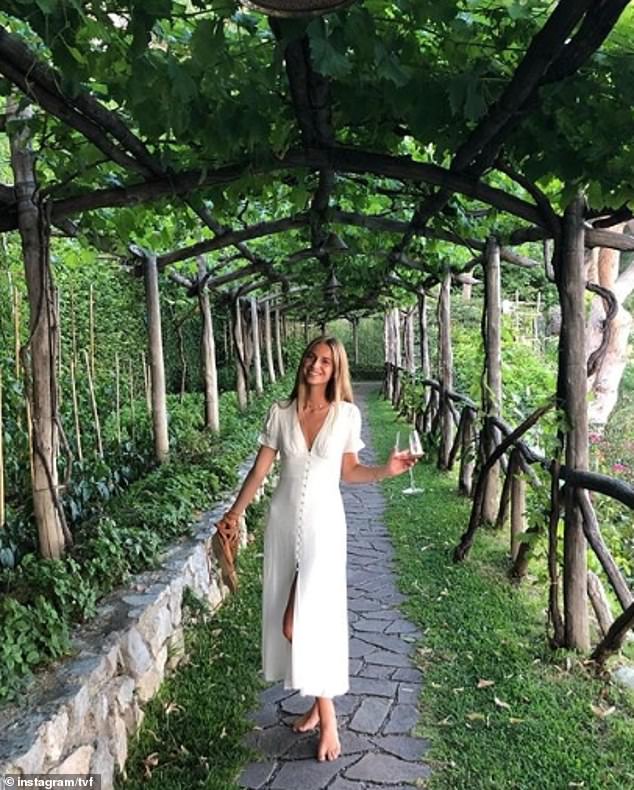 The pretty heiress is often seen enjoying luxury holidays in a variety of countries, from Italy to Mexico and Greece 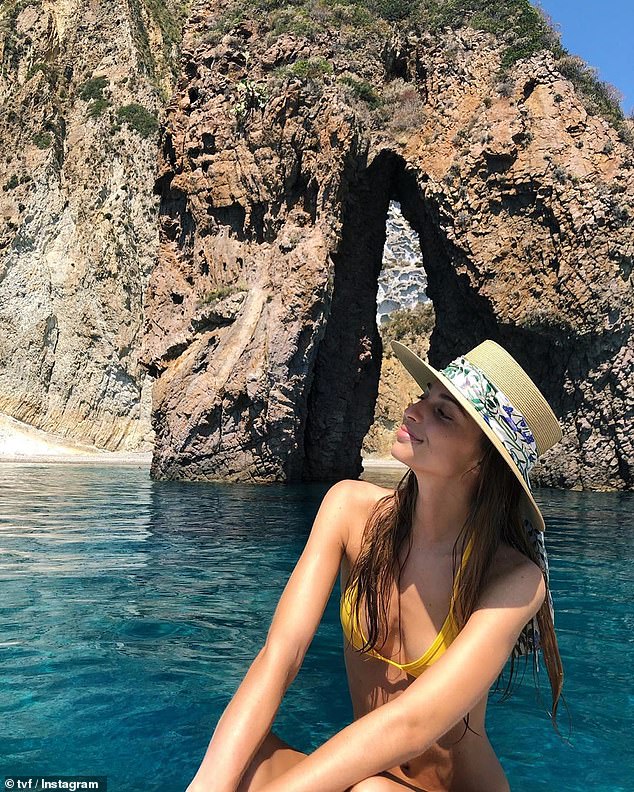 The 20-year-old insisted that her life was relatively normal, despite her glamorous Instagram where she often posts snaps travelling to exotic destinations

In the past year, Talita has been spotted vacationing across the globe, from luxury resorts in Italy and Mexico to stylish getaways in Japan and Greece.

But despite her glamorous Instagram, Talita has insisted that she was relatively normal.

The young designer went on to suggest that her social media was all part of ‘building a brand’.

The socialite – who has over 200,000 followers on the platform, revealed: ‘You don’t show yourself doing laundry. It’s the moments you want to glamorise.’

She added: ‘I’m building a brand. It’s not an authentic presentation of your life.’