Russell Brand is no stranger to controversy, but even he must have been surprised by the backlash to his parenting confessions. Casually admitting this month that he has never looked after his children for a 24-hour period caused social media to burst a blood vessel, with accusations of sexism being among the more charitable criticisms he has received.

The 43-year-old comedian has two daughters — Mabel, two, and Peggy, six months — with his "lifestyle blogger" wife Laura Gallacher, sister of TV presenter Kirsty. But he's been far too busy, submerged in the land of the deep and spiritual, to get his hands dirty. "I'm very focused on the mystical connotations of their beauty and grace," he said, "not so good on the nappies and making sure they eat food." 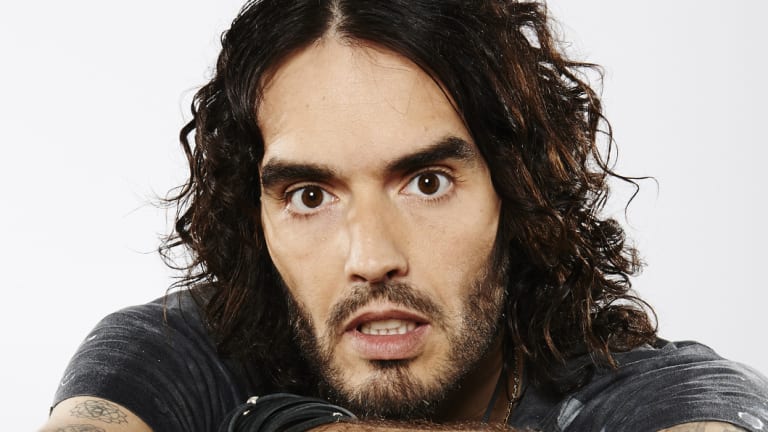 Russell Brand copped it for confessing to be under-performing parenthood.Credit:ABC

Yes, right-on Russ is too sensitive to do any real childcare. He's too busy marvelling at the cosmic wonder of his children to actually feed the poor mites. He's your classic chauvinist with added crystals and lentils, an old-fashioned sexist in hippy-dippy clothing. Poor Laura basically has three children, not two.

Annie O'Leary, of the parenting website Netmums, spoke for the nation when she told Brand: "Stop talking twaddle and get stuck in." The sad fact is, though, that Brand's parody-defying, navel-gazing views aren't an anomaly. Instead, they reveal the truth about a certain sort of 21st-century father. In this era of political correctness, far too many men give the impression of being hands-on when, in reality, they still leave the hard yards to their partners.

This breed of bloke prides himself on being a perfect co-parent, but it's preening and performative, without much substance. They might put "proud father" or "devoted dad" in their social media profiles but dodge any practical parenting. They want credit for being "woke", while secretly expecting women to do the real graft.

Take my friend Rachel's husband, Peter, for example. They have three children, the oldest of whom is now a teenager, but, despite 15 years of fatherhood, Peter has somehow remained pathologically useless. If Rachel's not home for even one mealtime, he takes them to a restaurant because he can't cook dinner himself unless his wife has left it laid out, ready to microwave, with foolproof instructions.

So far, so unreconstructed — except Peter invariably sells this as "spending quality time" with "my brilliant kids" and taking them out as "a treat". He'll post Instagram pictures of their Nando's feast to prove what a terrific guy he is, when really he's just a man-child who can't work a kitchen appliance. (Peter is a successful IT consultant, incidentally, not the village idiot.)

It's a similar story with my friend Lisa who, during a recent catch-up over wine and cheese, spent the entire afternoon fielding calls from her husband, desperately inquiring what to do with their twin daughters. Did they need hats? Were they allowed snacks? She ended up leaving early in stressed-out tears, wine half-finished. Cheers, indeed.

It's even worse in the world of celebrity, where hands-off fathers can afford a fleet of nannies to cover for their inadequacies.

Pharrell Williams might style himself as a supercool renaissance man but recently admitted that he refused to change his triplets' diapers.

Musician Pharrell Williams might style himself as a supercool renaissance man but recently admitted that he refused to change his triplets'"diapers", while Jacob Rees-Mogg happily admits to having never handled a single one of his six children's nappies – though at least he doesn't pretend to be a paragon of PC virtue.

When it comes to modern parenting, mobile phones account for much of the problem, serving as a buck-passing device or remote babysitter. Doofus dads also seem to delight in spamming their partner endlessly with pictures of their child while in his care, the subtext being: stop enjoying yourself and come home, or look how much fun we're having without you!

Either way, I've lost count of the number of lunches I've had with female friends that have been ruined by their phones pinging constantly, the guilt-trip snaps and foolish questions refusing to cease.

Other classics of the genre include fathers who talk about "babysitting" their own children like they're filling in as a favour; as if this is an additional duty they should be rewarded for. They are yet to realise, it would appear, that when they're your own, it's just parenting. 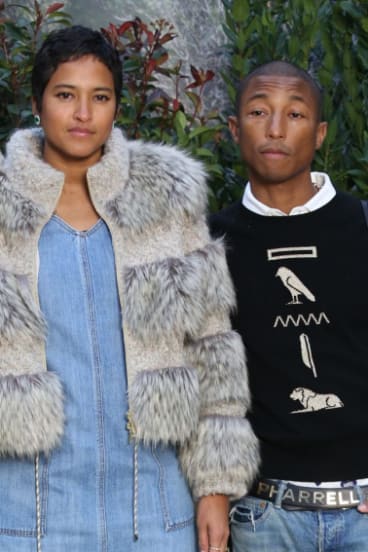 Pharrell Williams and his wife Helen Lasichanh at the 2019 Paris Fashion Week. He may be happy, but he is not a fan of the nappy change.Credit:Domine Jerome/ABACA/AP

But these days, in the age of sharenting where we can all see — or be seen — to be performing the part of loving Pa, an idealised image of fatherhood has emerged: one that involves nonchalant one-handed pram-pushing and ostentatious Frisbee-chucking in the park, all of which is then documented on social media, naturally.

These chaps flinch, however, when it comes to the less glamorous graft, which they deem "her department". It's a trope nailed perfectly by BBC Two parenting sitcom Motherland. Harassed working mother Julia (Anna Maxwell Martin) has a husband who's always at a sport event or stag do when she needs help. He makes the right noises ("Hey, I hear you", "Look, babe, if you want me to come home…") but, ultimately, does sweet FA.

These, often, are the fathers who think hauling the kids to soft play for two hours on a Sunday morning so their wives can have a lie-in makes them some sort of progressive hero — even though she only needs the rest because she's been in sole charge of their children's care all week.

Last month, I witnessed a friend catch a whiff of a filled nappy while holding his four-month-old son – who he immediately handed back to his wife. This isn't natural uncertainty around a newborn, rather a refusal to deal with the dirty parts of looking after his third child. No matter that he is a strapping, all-action personal trainer – when it comes to a soggy nappy, he's as squeamish as they come, handing over his smallest charge to his partner as if she is the unpaid help.

When these fathers do lower themselves to do some form of childcare, they're praised for being a "saint". Witness the hero's welcome they get at the school gates — ridiculous, really, given the fact that the novelty of their appearance surely proves how little they're usually involved.

When American comedian Kevin Hart uploaded a video of himself changing his one-month-old's nappy with the caption "Daddy did that!" online, fans rushed to praise him, apparently failing to understand that fathers need not receive credit for things that mothers do without a second thought.

Right-on dads often play up their incompetence, too — "she's so much better at this stuff than me" — to get out of doing their bit. Like Russell Brand's wife, Laura, women are better at it because they have no choice. Someone has to take responsibility and do the basics. To refuse is, plainly, idle.

Two of my friends are getting divorced over this: the husband's pretence in public of hands-on parenting, and utter haplessness in private.

Stereotypical gender roles stick in the throat, but the gap between appearance and reality makes things all the worse. These men carefully project an image of perfect dadhood but, behind closed doors, are as nappy-phobic as their own fathers ever were.

Two of my friends are currently getting divorced over precisely this: the husband's pretence of hands-on parenting in public, and utter haplessness in private. Meanwhile, a new father I know raves enthusiastically about dad-and-baby yoga outings (well, he is from north London), while his long-suffering girlfriend is tasked with handling all feeds because her other half "needs nine hours' sleep". Often, it feels as though we haven't progressed at all.

The reality is that parenting isn't all Kodak moments but is full of the daily grind and boring bits. Russell Brand's "I'm too sensitive to do any practical childcare" shtick is boring and outdated: that raising children is woman's work.

Until men do their share — not just nappy-changing but feeding, bathing, cooking, caring for children when they're sick, organising birthday parties and play dates — they'll never be proper co-parents. Patting yourself on the back for doing 10 per cent isn't enough, closer to 50 per cent needs to be the target.

It boils down to this: are you prepared to grow up, almost overnight? Because that's ultimately what the job requires. Russell Brand, it appears, clearly isn't. He should focus on the mystical connotations of that.