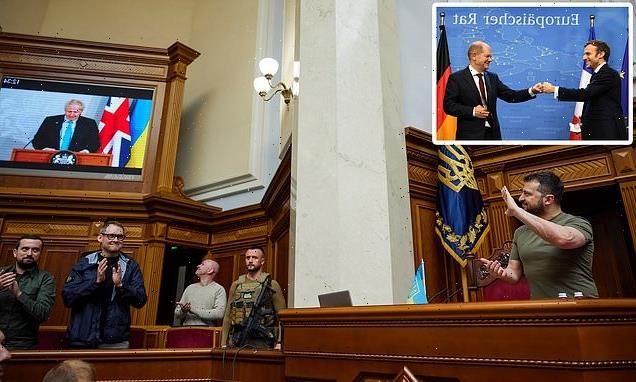 While France and Germany vacillate, Boris Johnson looks like the only grown-up in the room… The Prime Minister has become a hero in Ukraine and is a pivotal figure in how this tragic conflict will play out, writes STEPHEN ROBINSON

A pair of Tory canvassers came to our front door last weekend asking if they could rely on my support in today’s local elections.

They had a battle-weary look about them. I sensed they had already suffered some difficult doorstep encounters.

I told them that I happen to know Boris Johnson, as we worked on the same newspaper for many years.

So I know him to be intellectually brilliant and personally brave, but that he always operates within a microclimate of chaos of his own creation.

I conceded that even I was getting fed up with the drip-drip of stupid, self-inflicted errors perpetrated by the hapless Downing Street operation.

My gripes included the failure to shake off ‘partygate’, the economically incoherent tax rises in the Budget, the abysmal calibre of his cabinet ministers, and the lack of any sort of grand Tory vision.

The odd thing was that the Conservative canvassers immediately started agreeing with me.

I said that though I personally could not get exercised about the breaching of silly Covid rules during lockdown, I understood why people were furious. They replied: ‘That was terrible and we were also furious.’

They were painfully polite and we parted on terms that left it open that I might abstain in today’s vote.

Then, this week, events intruded, as they so often do. One showed up Labour leader Sir Keir Starmer’s manifold inadequacies, the other Boris’s latent strengths.

It would be disingenuous to deny there is a certain magnificence about Mr Johnson’s theatrical displays of defiance in the face of Vladimir Putin’s brutal desecration of Ukraine.

This Prime Minister — and, let’s not forget, biographer of Winston Churchill — immediately grasped the importance of symbolism in the conduct of this war.

And on Tuesday, he became the first foreign leader to make a video address to the Ukrainian parliament since the Russian invasion began.

In a stirring display of oratory, he announced a further £300 million in military aid, telling the parliament: ‘You will be free.’ In a less than subtle resort to Churchillian rhetoric, he added that this was their ‘finest hour’.

To an English ear it might have sounded a bit too much, but the Ukrainians responded with a standing ovation.

Characteristically, the BBC chose to emphasise the domestic political scepticism to this charismatic intervention.

An obscure LibDem called Layla Moran suggested the timing of the address could be ‘deeply cynical’, with elections this week. Well, she should know. 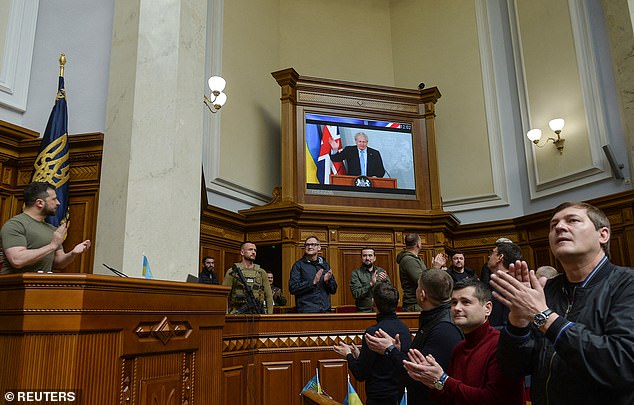 This was not how die-hard anti-Brexiteers thought events should unfold.

Yet, to the dismay of the Left and unreconciled Remainers, Boris has become a hero in Ukraine and is now a pivotal figure in how this tragic conflict will play out.

He went to Kyiv last month, at some personal risk, to walk the streets with Volodymyr Zelensky.

As the Ukrainian president told his nation: ‘Boris was among those who did not hesitate for a moment whether to help Ukraine.’

I suspect Keir Starmer, if he were Prime Minister, would have allowed himself to be talked out of going to Kyiv by officials who deemed it ‘provocative’ to Moscow.

The great thing about Boris Johnson is that he dismisses such concerns out of hand. And his boldness has won him hearts as well as minds in Ukraine.

While Germany and France have vacillated, Boris has been decisive, brave and guided by his instincts. This is when he is at his best as a politician.

Now he is the main foreign leader in Kyiv’s mind, rather than Chancellor Olaf Scholz of Germany, or newly re-elected President Emmanuel Macron of France.

The sclerotic EU bureaucracy remains racked by dissent between member states, many with various residual sympathies for Moscow, and hobbled by an absence of combined military capability.

Yesterday they could not even agree on an embargo on Russian oil due to Hungarian objections.

Clearly Washington, through Nato, makes the big military calls, but it is becoming alarmingly apparent that the increasingly doddery President Joe Biden is no longer cognitively capable of leading the diplomatic fightback against Putin’s aggression. Hence Boris Johnson’s enhanced status.

Immediately after the invasion of Ukraine, Herr Scholz tore up 30 years of German foreign policy, honed under his predecessor Angela Merkel.

This was predicated on sucking up to Russia as a gesture of apology for all that unpleasantness in the 1940s.

In the most astonishing volte-face since Hitler’s termination in 1941 of the Molotov-Ribbentrop pact — a non-aggression treaty between Russia and Germany — Herr Scholz declared that German military expenditure would be vastly increased and the Nord Stream 2 gas pipeline from Russia cancelled.

But in the intervening six weeks, it appears that the Putin appeasers in his own party have got to Scholz and his will has faltered.

He is foot-dragging on promises of arms shipments to beef up Ukrainian defences and the Russian subjugation of Ukraine continues to be funded by German payments for gas. 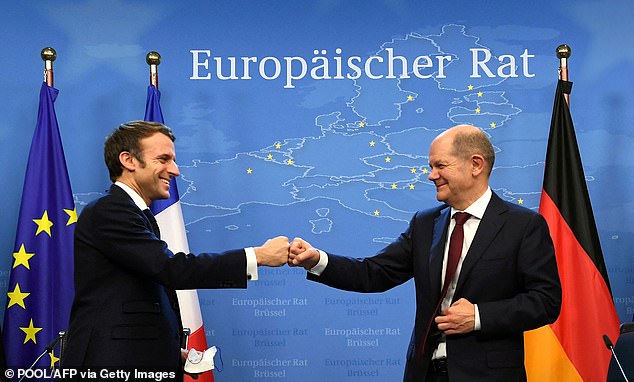 Now Boris is the main foreign leader in Kyiv’s mind, rather than Chancellor Olaf Scholz of Germany, or newly re-elected President Emmanuel Macron of France 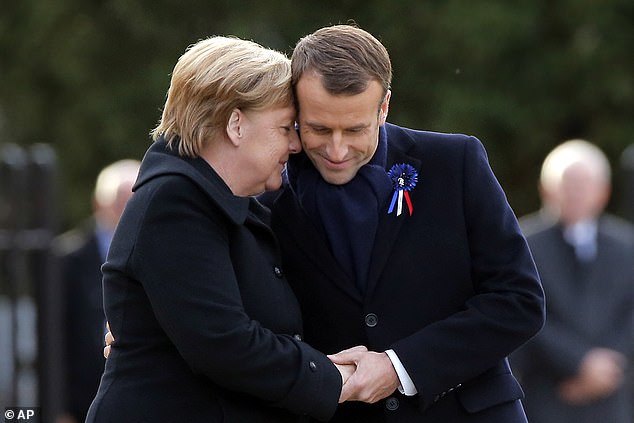 Immediately after the invasion of Ukraine, Herr Scholz tore up 30 years of German foreign policy, honed under his predecessor Angela Merkel. This was predicated on sucking up to Russia as a gesture of apology for all that unpleasantness in the 1940s

Now there is a new diplomatic spat. Germany’s figurehead president has been barred from visiting Kyiv because he is deemed to be too cosy with Putin. In retaliation, Scholz is refusing to go himself.

Ukraine’s ambassador in Berlin, Andrij Melnyk, responded by describing Scholz as a ‘huffy liver sausage’, which in diplomatic terms is about as bad as it gets.

Meanwhile, President Macron is derided as a latter-day Neville Chamberlain for thinking that his diplomatic interventions with Putin could have averted the invasion in the first place.

In the past five months, Macron has had no fewer than 19 telephone calls and Zoom conversations with Putin, as well as five hours of talks across the longest table in Moscow. But all so far to no avail.

So the question on election day is: where does this leave us?

Sir Keir Starmer must regret having made so much of Boris’s breaking of lockdown rules now it is clear he did exactly the same.

Notwithstanding his implausible denial that the beer and curry event at Durham Miners’ Hall breached no rules, it is clear his office lied when it denied that his deputy, Angela Rayner, was also present at the ‘work gathering’.

The point about Boris is that he is an obvious rogue whom you would expect to break the rules. Sir Keir Starmer QC, former head of the Crown Prosecution Service, should know better.

If he is not dependable and truthful in a clever, lawyerly sort of way, then what is the point of him?

Boris Johnson, in contrast, has always been a bit of a chancer. But the same was said of his political hero, Winston Churchill, who — like Boris — was blessed with the political hide of a rhinoceros.

Alone among British and European leaders, Boris understands that Russia’s attempted eradication of Ukraine as a sovereign state is a defining historical moment.

There is no room for ducking or shading. What Putin has done is an outrage. But if we do not face down this threat, we risk consequences that are unimaginable, but include nuclear war within Europe and beyond.

Boris Johnson was quick to understand this central truth. Once derided for his sloppy self-indulgence, he now seems like the grown-up in the room.

Much as we moan, many instinctive Conservatives understand that point. This is why I suspect Boris Johnson and his party will do better in today’s polls than his detractors hope and expect.

I for one, having given the matter a great deal of thought since speaking to those canvassers, will today be putting my X next to the names of my local Conservative candidates.