What other country would have reacted to this drone fiasco with such a mind-boggling mix of complacency and incompetence, asks STEPHEN GLOVER

As a result of Gatwick’s drone fiasco last week, the Christmases of some 140,000 people have been ruined. It is an appalling story. What is so depressing is that nobody — apart from the long-suffering and generally well-behaved passengers — comes out of it well.

Of course, it goes without saying that the true villains are the pathologically selfish morons — or maybe there was only one demented perpetrator — who flew their drones over Gatwick airport.

The idea that those responsible might face a maximum of only five years in prison for deliberately and cruelly causing such upheaval at a cost of untold millions of pounds is farcical. If the culprits are ever caught, they should be given much longer sentences. 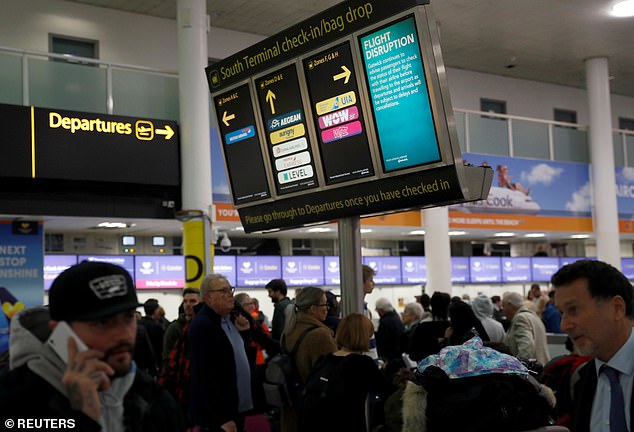 As a result of Gatwick’s drone fiasco last week, the Christmases of some 140,000 people have been ruined

But there are many wider questions arising from this debacle. One has to ask whether there is any other major developed country in the world that would have responded to these drone antics with such a mind-boggling combination of complacency and incompetence.

And beyond this question is an even more fundamental — and deeply troubling — one. What does it say about the authorities that what should have been a relatively minor and easily-dealt-with irritation became a major crisis that has turned us into an international laughing stock?

For wherever one looks there was ineptitude on a grand scale, and some venality. The police, the Government, the airlines and Gatwick airport itself — they all let down the people whom they are supposed to serve.

Let us examine the defects of all these bodies. In a way, police failings were the least egregious, if only because they were the most predictable.

Sussex Police chiefs had evidently given almost no thought to the possibility of a drone attack at Gatwick. When it happened, officers were reduced to keeping a lookout in neighbouring fields.

As early as Saturday afternoon, much of the national Press suspected that blundering bobbies had arrested an innocent local couple, who were yesterday released without charge — having had their faces plastered over the front pages.

Although the police claim they have other ‘people of interest’ in their sights, no one can be confident they will quickly identify the criminals responsible for this outrage. Indeed, that’s if there are any culprits, since last night the police admitted there may not even have been any drone activity in the first place.

Whatever idiocies the boys in blue have committed, they were probably surpassed by those of the Government, and in particular the hapless Transport Secretary Chris Grayling. Already justly under fire following repeated railway cock-ups, Grayling now faces accusations on a wider front.

It was reported that this year he shelved plans to regulate drone use in Britain, despite being warned on many occasions about the risk drones pose to airports. The reasoning was that his civil servants have been preoccupied with Brexit.

The Transport Secretary must tell us whether this grave allegation is true. If it is, it is very difficult to see how this serial bungler can be allowed to continue in his job. What could be more important than the safety of passengers at airports, Brexit or no Brexit?

Moreover, the Government needs to explain why officials at the Department of Transport and the Home Office seemingly dragged their feet for many hours after the first drone sighting last Wednesday night.

Even though a crack RAF team of electronic warfare specialists was reportedly ready to fly into Gatwick by helicopter, cautious Whitehall pen-pushers were reluctant to request military assistance until the following day.

Needless to say, if this had happened in Moscow, Putin’s sharpshooters would have blown the drones out of the sky within a couple of hours. That may not be how things are done in democracies. But it’s hard to imagine the authorities in France or the U.S. responding with such bumbling indecision.

What has happened to our country that the authorities took the best part of three days before they finally succeeded in neutralising these unarmed machines which were, if truth be told, not much more than sophisticated toys?

As with the police, it can at least be fairly stated that the Government’s many shortcomings are attributable to a kind of ingrained half-wittedness, and can’t be laid at the door of unscrupulousness or greed. Alas, the same can’t be said of the airlines.

Granted, they were not in any way responsible for the activities of the drone freaks. Yet some of them behaved with a callousness and ruthlessness that hard-pressed passengers will recognise.

Arguably, airlines should not be expected to compensate passengers as a result of events beyond their control, which will have involved them in extra costs they did not expect. 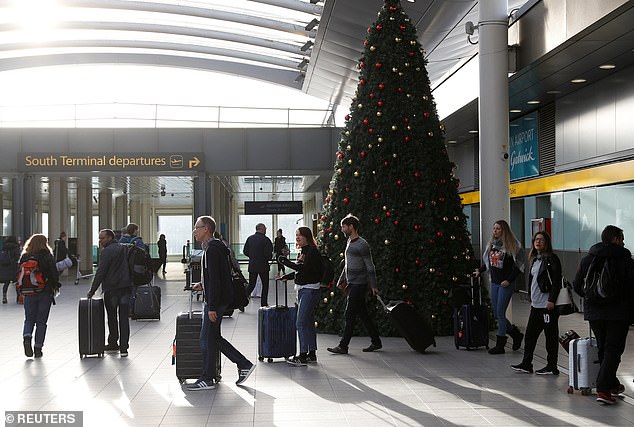 But there are myriad stories of them cashing in by dramatically inflating the price of pre-Christmas tickets that passengers bought after their original flights were aborted. The cost of cancelled tickets was covered, but some passengers were made to pay a lot more for re-booking.

For example, the Mail reported on Saturday that one couple from Hertfordshire claimed it cost them £7,000 to re-book flights home from New York. A man flying to Ghana to attend his uncle’s wedding was forced to pay at least double the price of his original ticket.

Meanwhile, countless passengers complained about lack of information from their airlines. One woman, whose flight to Morocco had been cancelled, told Radio 4’s PM programme on Saturday that she had racked up £100 in call charges seeking guidance on a premium line costing 50p a minute.

Yet throughout all this, as they were forced to wait hours while being told little or nothing by their airlines, most people reportedly endured their undeserved ordeal stoically, sometimes even with good humour.

Gatwick airport itself — the fourth and last of the guilty parties — was also criticised by some passengers for providing scant information. It stands accused of the perhaps more serious failing of having been warned about the drone threat as recently as July, and doing virtually nothing about it.

In a well-ordered country, Chris Grayling would issue threats and bang heads together at the airlines and at Gatwick, and ensure that sharp practices are reversed and mistakes addressed. But can anyone have confidence that our inadequate Transport Secretary will do this?

Part of me hopes against hope that this disgraceful shambles was just a one-off and does not tell us very much about the deficiencies of the police, the feebleness of our stricken Government, the grasping and high-handed character of some airlines, and the complacency of airport authorities.

But I’m afraid it is not possible to be wholly sanguine. When General Richard Dannatt, former Chief of the General Staff, describes what happened at Gatwick as ‘a national embarrassment of near-biblical proportions’, he does not exaggerate. How they must be sniggering in Brussels, Berlin and Paris!

This country, as we all know, finds itself at a critical juncture in its history. We face enormous challenges. I have always been sure we will meet them, one way or another.

But who, after the chastening events of the past few days, can be quite so certain?