Victoria and the Commonwealth are ramping up efforts to build thousands of kilometres of new energy transmission lines as part of a $2.25 billion push to modernise the state’s electricity grid and massively expand its offshore wind industry.

Ahead of next week’s federal budget, the Andrews and Albanese governments have signed a deal to spend $1.5 billion on concessional finance for renewable energy projects, promising to place downward pressure on soaring electricity bills and improve energy security with “the rapid development” of wind projects in the Bass Strait. 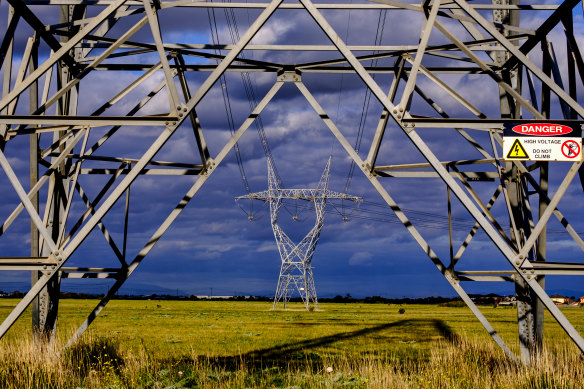 Victoria and the Commonwealth have announced plans to ramp up the uptake of offshore wind by building a massive new transmission line.Credit:Luis Ascui

Under the plan, the Clean Energy Finance Corporation will also provide a concessional loan of $750 million to build the much-anticipated KerangLink inter-connector, a massive new high-capacity, high-voltage overhead transmission line running between Victoria and NSW.

The project, likely to cost about $3.3 billion in total, is expected to connect Victoria’s Western Renewables Link (at a proposed terminal north of Ballarat) with Project EnergyConnect (at Dinawan) via new stations near Bendigo and Kerang.

It would mean power stored by the Snowy 2.0 hydropower project in the Snowy Mountains could be to be transferred to Victoria, while power generated by new Victorian offshore wind farm projects in the Bass Strait could be sent north.

Prime Minister Anthony Albanese said the announcement followed the Commonwealth’s recent consultation on an offshore wind development zone off Gippsland, the first in the nation.

In a joint statement, the state and federal governments said the plan would “supercharge” regional jobs, with the new KerangLink inter-connector allowing 4000 MW of new power generation, creating more than 2000 direct jobs during construction and $1.8 billion worth of benefits, including for electricity users.

“This is a historic day for Victoria and for Australia, with the rollout of these key projects putting us on track to be a renewable energy superpower,” Albanese said.

“Victoria has cut emissions by more than any other state, tripled the amount of renewable energy and created thousands of jobs,” he said. “We’re not just talking about climate action, we’re getting on with it.” 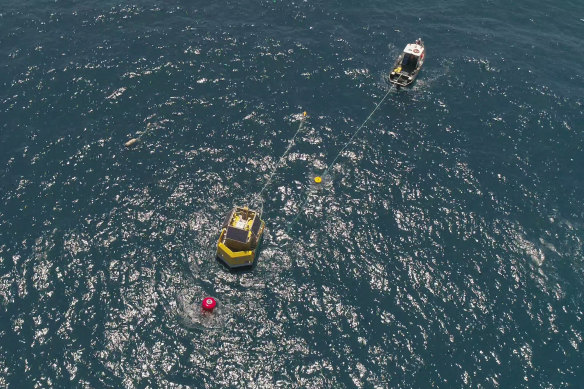 Star of the South wind- and wave-monitoring equipment collects data off the coast of Gippsland.

Earlier this year, the Australian Energy Market Operator (AEMO) placed the KerangLink project in the “to be progressed urgently” category, along with four massive grid upgrades involving a total of 10,000 kilometres of new transmission lines.

But until now, the timing or financing arrangements have been unclear, with AEMO suggesting only that the project must be built by the middle of 2031 “or earlier with additional support”. The issue will be raised at an upcoming meeting of state and federal energy ministers on August 12.

AEMO’s project assessment of the link found it would generate net benefits of $687 million and warned it would be needed to hit Australia’s target of net-zero emissions by 2050.

“The forecast closure of ageing coal-fired generators in Victoria and NSW over the coming decades presents a significant challenge to supply reliability for the energy industry,” the AEMO’s report said.

Victoria is promising that half of the state’s electricity will be generated using renewable energy by 2030. But the plan is facing a huge potential roadblock, with the capacity of the grid to handle more renewables reaching its limits.

Under the agreement, the three jurisdictions each promised to contribute equally to a total 20 per cent of the project cost.

It said the undersea link would create 1400 jobs in Victoria and attract $1.5 billion of investment to the Gippsland region.

State government modelling recently provided to The Age found the KerangLink project would allow Victoria to export 1930 megawatts of electricity to NSW from renewable projects, such as offshore wind farms. It estimated the project would cut retail power bills by between $30 and $40 a year from 2030 onwards, with capital costs offset by cheaper power.